Does humanity find it easier to adapt to a warm climate than a cold climate?

In a recent response to some questions from schoolchildren about climate change, well known climate skeptic Ross McKitrick made the following statement:

This seems reasonable given what we know from recorded history. For example, the European and American Little Ice Age might have led to some nice winter art but it wasn't very good for the population.

Is McKitrick's claim right that we find it easier to adapt to a warm climate than a cold climate? Supplementary question: since the history of extends cold periods is mostly pre-industrial, is it less true now than it used to be?

PS this isn't a question about the existence of global warming (which McKitrick doesn't deny in the response quoted above) or a potential future Ice Age (which people like Matt Ridley are still speculating about). The question is about humanity's ability to adapt to different climate conditions. And nothing else.

Since you were (apparently) thinking about line of research of David Zhang and his colleagues: yes they did find that cold weather historically promoted more wars and ultimately population decline, but they also found (2011) this was mediated by falling agricultural production: 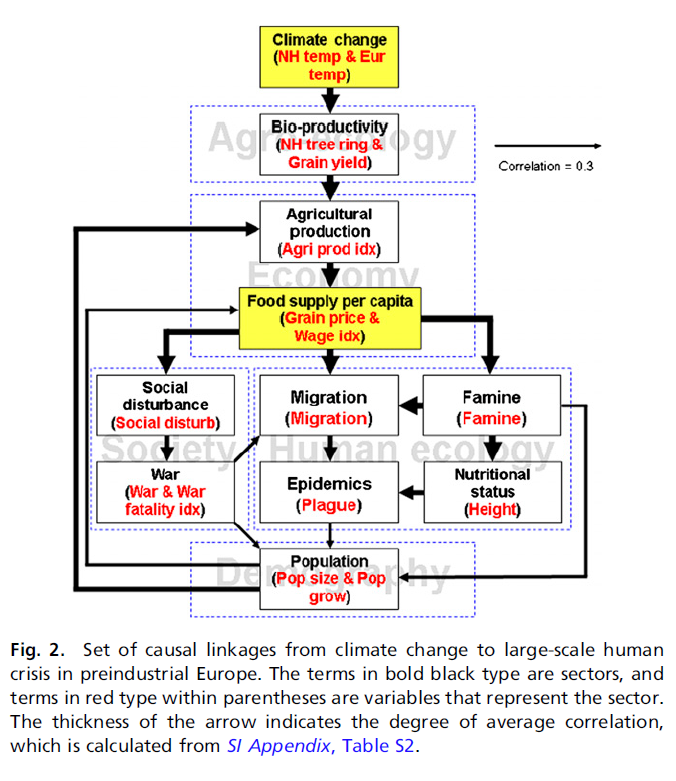 Although agricultural production decreased or stagnated in a cold climate, population size still grew. Hence, two variables of [food supply per capita] FSPC—grain price and real wages of labor—changed considerably, and economic crisis followed. Grain price is determined by both demand and supply and is an important indicator of the boom-and-bust cycle in an agrarian economy.

In other words, the same ultimate consequence on population could also happen if the weather get warm enough to have the same effect on agriculture, although historically that was not observed a lot in the data they looked at, except:

However, [in -- sic] the NH [Northern Hemisphere] warming also caused widespread famine between the 11th and 12th centuries (the Medieval Warm Period), because high temperature caused drought in North Africa and Western Asia [...]. However, the warmth was not severe enough to engender global crises.

There are more historical examples (in both directions, but mainly droughts are outlined in the following figure) in a 2013 Science meta-analysis and review by Hsiang et al., which mostly covered papers on events in the modern era; there were not enough papers on the pre-industrial era for a meta-analysis of those, but I take it you're less interested in the modern era anyway: 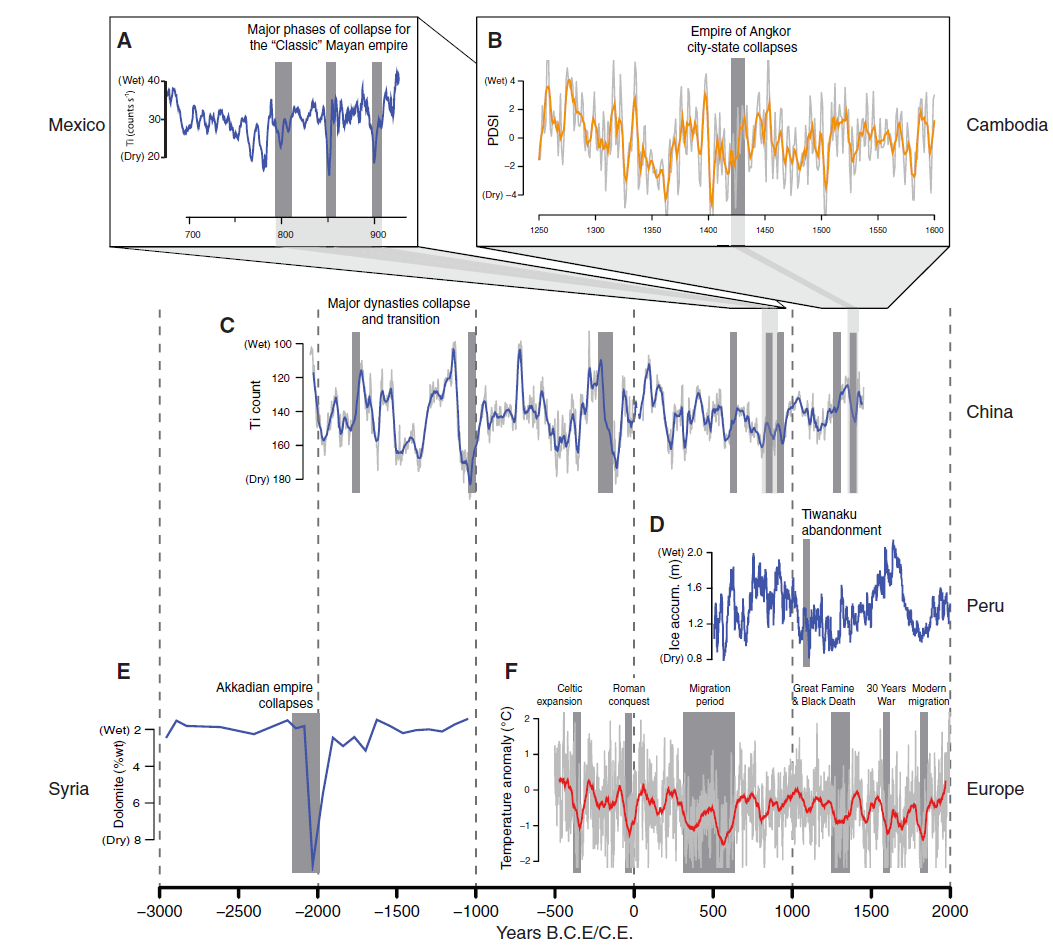 Fig. 3. Examples of paleoclimate reconstructions that find associations between climatic changes and human conflict. Lines are climate reconstructions (red, temperature; blue, precipitation; orange, drought; smoothed moving averages when light gray lines are shown), and dark gray bars indicate periods of substantial social instability, violent conflict, or the breakdown of political institutions. (A) Alluvial sediments from the Cariaco Basin indicate substantial multiyear droughts coinciding with the collapse of the Maya civilization. (B) Reconstruction of a drought index from tree rings in Vietnam, the Palmer drought severity index (PDSI), shows sustained megadroughts prior to the collapse of the Angkor kingdom. (C) Sediments from Lake Huguang Maar in China indicate abrupt and sustained periods of reduced summertime precipitation that coincided with most major dynastic transitions. The collapse of the Tang Dynasty (907) coincided with the terminal collapse of the Maya (A), both of which occurred when the Pacific Ocean altered rainfall patterns in both hemispheres. Similarly, the collapse of the Yuan Dynasty (1368) coincided with collapse of Angkor (B), which shares the same regional climate. (D) Tiwanaku cultivation of the Lake Titicaca region ended abruptly after a drying of the region, as measured by ice accumulation in the Quelccaya Ice Cap, Peru. (E) Continental dust blown from Mesopotamia into the Gulf of Oman indicates terrestrial drying that is coincident with the collapse of the Akkadian empire. (F) European tree rings indicate that anomalously cold periods were associated with major periods of instability on the European continent.

Also note that there has been an opposing view to Hsiang et al. by Buhaug et al. (2014) although as far as I can tell that's about Hsiang's meta-analysis of papers on the industrial era. (For more on the Hsiang-Buhaug disagreement see Science Oct. 28, 2014.) I don't see (in Buhaug) an overt criticism of Hsiang's [pre-industrial] historical examples.

McMichael (2012) argued that temperature-wise the historical record is mostly biased by cold-temperature spikes, so that inferring the impact of climate changes from the direction (rather than the absolute magnitude) of temperature changes is mistaken:

• the nexus of drought, famine, and starvation has been the major serious adverse climatic impact on health over the past 12,000 y.

• Historical experience shows that temperature changes of 1 to 2 °C (whether up or, more frequently, down) can impair food yields and influence infectious disease risks. Hence, the health risks in a future world forecast to undergo human-induced warming of both unprecedented rapidity and magnitude (perhaps well above 2 °C) are likely to be great.

Analyzing some of the typical historical examples (in a somewhat obscure venue, I have to say), Diaz and Trouet (2014) conclude that

Drought appears to be the most common high-impact stressor in the historical and prehistorical records. [... However] We emphasize that climatic changes alone are unlikely to be the sole determinant cause of a given society’s response – whether abandonment of settlements or bellicose action against its own members or neighbors. Often, the natural hazard is simply a catalyst for actions whose groundwork had been set in motion for some time prior.

And as far as the anticipated global warming is concerned, that's bad news as well, i.e. an increase in drought is predicted for most areas of the globe that presently have high population density.

Not the answer you're looking for? Browse other questions tagged climatology .