Does gerrymandering have a significant effect on the number of congressional seats won by Republicans?

The AP’s findings are similar to recent ones from the Brennan Center for Justice at the New York University School of Law, which used three statistical tests to analyze the 2012-2016 congressional elections. Its report found a persistent Republican advantage and “clear evidence that aggressive gerrymandering is distorting the nation’s congressional maps,” posing a “threat to democracy.” The Brennan Center did not analyze state legislative elections.

For Democrats to complain of gerrymandering is “pure nonsense,” said Matt Walter, the Republican committee’s president.

Are the Republicans correct when they say that gerrymandering has little effect or does it have a significant effect? If so, how strong does the effect happen to be?

This bears some confusion. Gerrymandering is a real thing, but it is not the primary problem with (from the other answer)

Regardless of which side is doing it, a portion of the population is not getting a fair representation and that's (again in my opinion) a problem.

The efficiency gap is looked at on a group basis, mostly per state because that is where redistricting occurs. It measures how many votes are wasted or lost because they either take the vote above 50% for the winner or are votes for the loser. So there will be an efficiency loss of 50% for every district, split between the two parties (efficiency gap analysis ignores others).

At the national level it could be argued that the gerrymandering might be even itself out to some degree (not sure if that's the case or not - from the numbers I've seen it appears that the GOP has an advantage) but in my opinion two wrongs don't make a right.

Efficiency gap analysis doesn't measure that. In fact, it does the exact opposite. It says that if one side is benefiting more than the other side, that we should transfer some of that benefit to the other side. This doesn't change the amount of disenfranchisement. It just moves it from one side to the other. Because that eliminates the gap in the efficiency. I.e. it is all about making the wrongs even. It makes no attempt whatsoever to remove the wrongs.

Democratic votes being concentrated in cities doesn't matter for gerrymandering. It isn't a problem to have a lot of geographically small districts inside a city, while having a small number of very geographically large districts in rural areas. In other words, you can make the districts "fair" even given the demographics.

Look at states like Massachusetts and Connecticut for example. In both states, the congressional delegation is entirely Democratic. But in both states there is a large enough Republican minority that they occasionally win the governorship. In Massachusetts, the breakdown is roughly 50% Democrat, 25% Republican, and 25% other. So in a proportional system, the Democrats should have four to five seats while the Republicans and other each have two to three seats. As is, Republicans and other have zero seats. In fact, nationally, other has zero seats in the House of Representatives.

Election analyst Sean Trende of Real Clear Politics did an analysis of gerrymandering where he measured the increase in partisanship. He found

If we define “Highly Partisan Districts” as those that are four points or more Republican (or Democratic) than the country as a whole, there were 195 such districts in 2010, and 200 in 2012. In 2000, under the previous set of lines, there were 193 “highly partisan” Republican districts.

The Washington Post Redistricting Scorecard used to show the same five seat advantage for Republicans in the last redistricting.

Fair Vote analyzed the North Carolina districts. They have a plan to combine districts into superdistricts with three to five seats in each. Under that analysis, they found that North Carolina should have a slight Republican lead but that Democrats should be able to win 7-6 in a good year while Republicans could win up to 8-5. The average result would be a 7-6 victory for the Republicans.

An analysis on Politics.SE found that under Cook Partisan Voting Index, Republicans did better than their national average in just three more districts in 2008/2012 versus 2004/2008.

TL;DR: Republicans gained three to five seats in the 2011 redistricting. depending on how one measures.

Both parties are guilty of gerrymandering. Most notably, Maryland has been gerrymandered to benefit the Democrats and North Carolina for the Republicans - widely considered the 2 worst gerrymandered states.

However, it is possible that one party has a bigger gerrymandering advantage than the other.

The Washington Post has a great article on the topic. To summarize:

This election year we can expect to hear a lot about Congressional district gerrymandering, which is when political parties redraw district boundaries to give themselves an electoral advantage.

... the point of gerrymandering isn't to draw yourself a collection of overwhelmingly safe seats. Rather, it's to give your opponents a small number of safe seats, while drawing yourself a larger number of seats that are not quite as safe, but that you can expect to win comfortably.

The author claims that his research has shown that

...the Democrats are under-represented by about 18 seats in the House, relative to their vote share in the 2012 election.

This is collaborated by the Brenner Center for Justice

Using data from the 2012, 2014, and 2016 election cycles, Extreme Maps finds that partisan bias resulting largely from the worst gerrymandering abuses in just a few battleground states provides Republicans a durable advantage of 16-17 seats in the current Congress...

How is that measured? Nicholas O. Stephanopoulos and Eric M. McGhee's article "Partisan Gerrymandering and the Efficiency Gap" describes how to measure the degree of gerrymandering. It's fairly simple, basically, you expect the number of seats each party gets to be fairly proportional to the amount of votes it received. A 40-60 vote split resulting in 60-40 seat split obviously indicate that outside factors are at work. 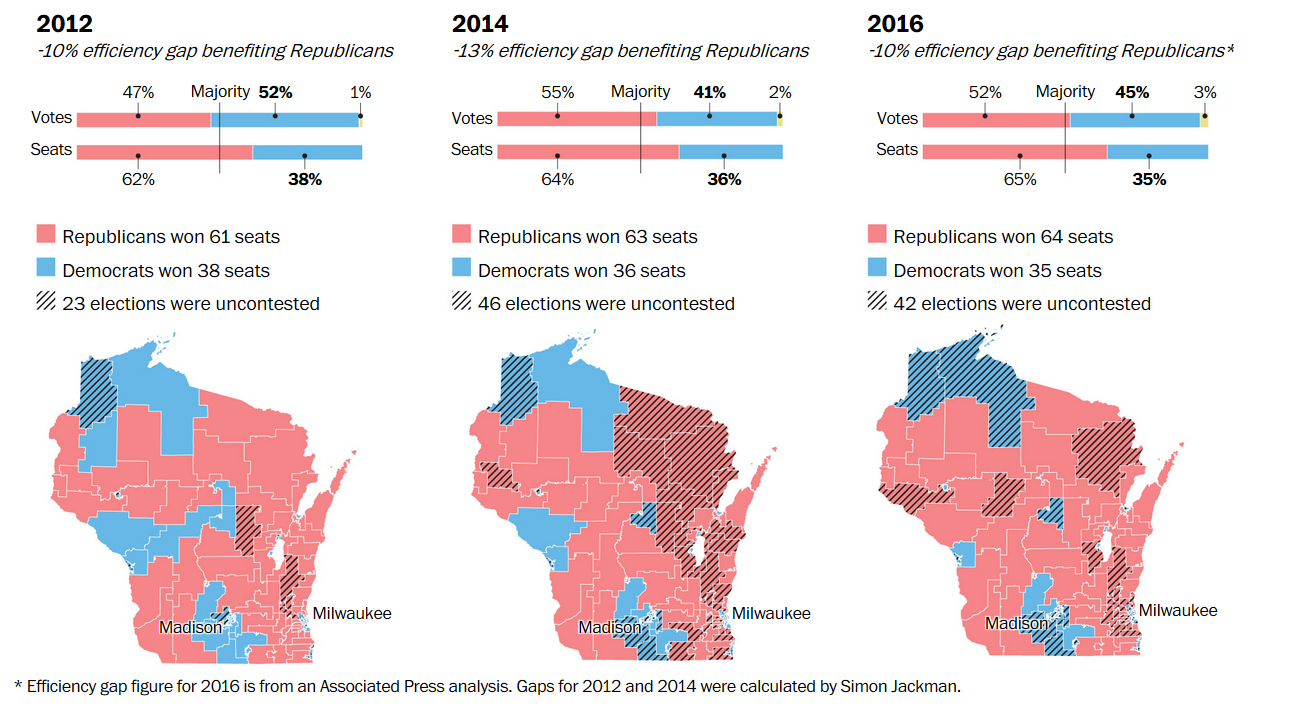 While it's only one state, I think that's significant for the residents of that state. At the national level it could be argued that the gerrymandering might be even itself out to some degree (not sure if that's the case or not - from the numbers I've seen it appears that the GOP has an advantage) but in my opinion two wrongs don't make a right. Regardless of which side is doing it, a portion of the population is not getting a fair representation and that's (again in my opinion) a problem.

was the paper that evaluated this.

Recent 538 Gerrymandering podcast made a similar claim (most of the results have little to do with partisan gerrymandering) but I don't think they made any quantitative claims, I need to find the podcast transcript.

Not the answer you're looking for? Browse other questions tagged united-states politics voting gerrymandering .

142
Did Republicans take 10 of 13 Congressional seats in the 2018 North Carolina general election with roughly the same number of votes as Democrats?

15
Do wind farms have a significant impact on weather patterns in the US?
2
Does the Defense establishment have plants in vast majority of Congressional districts?
12
Does gerrymandering of some US electoral boundaries drive polarisation between parties?
12
Does SNAP have the lowest rate of fraud of any federal program in the US?
194
Does the President of the United States have the ability to deploy nuclear weapons at will?
9
Does the Caravan have Middle Easterners?
142
Did Republicans take 10 of 13 Congressional seats in the 2018 North Carolina general election with roughly the same number of votes as Democrats?
16
Did health authorities receive a significant number of calls about the use of disinfectants (or drinking bleach) after president Trump mentioned it?
17
Does limiting the price of pharmaceuticals lower the number of new treatments produced?