Fewer shared immune genes in a couple correlate with (or even cause) more female orgasms?

I found in a psychology blog that

And the genes the paper is specifically talking about:

the histocompatibility complex (MHC), found in vertebrates, is a set of genes coding for cell-surface markers the immune system uses to discriminate self from pathogens.

The paper doesn't assert any explicit causality, but some is definitely implied via the evolutionary hypotheses mentioned: avoidance of inbreeding and "accumulating evidence suggests that women possess adaptive design to seek genetic benefits for offspring at midcycle, when they are fertile".

It seems a bit far fetched to me that frequency of orgasms could directly correlate with immune genes sharing. The authors also discuss related work (others' studies) on MHC non-sharing correlations with marriage (mostly negative results, i.e. 2 of 3 studies) and attraction (mostly positive results; 3 of 4 studies). The latter (attraction) seems to be the plausible mediating factor.

On the other hand, the reported correlation between orgasm and MHC sharing reached statistical significance only when stratified/moderated by fertility status: 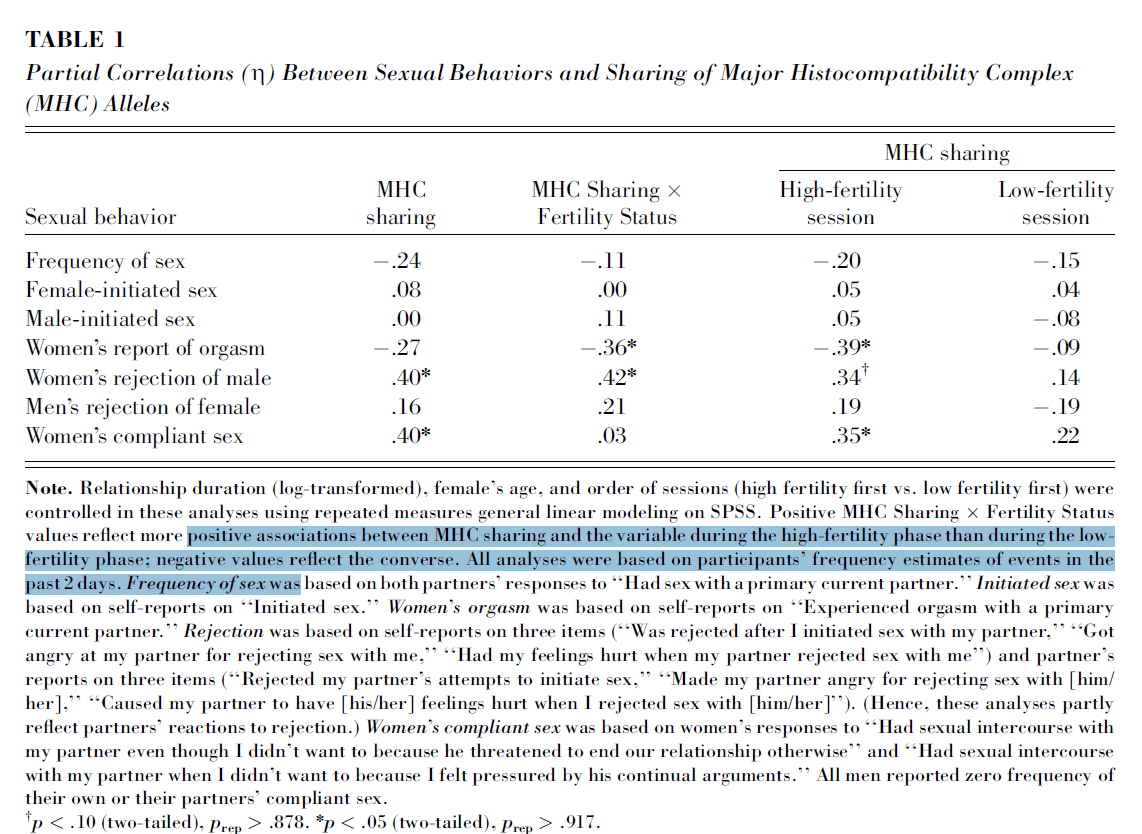 Is there more [recent] research on sex satisfaction (if not on orgasms explicitly) as they correlate with gene non-sharing in couples?

The correlation is observable. Despite the ongoing replication crisis, this statistical effect is reported relatively often. But the correlation is small, the effect size is small and the explanatory background as well as its value is very limited. What causes it, if it is not spurious, remains elusive. Confounding factors, alternative explanations are under explored. In the way this gets then reported a strong desire is revealed to paint findings no individual will notice in real life as an anthropological or even biological constant.

Randy Thornhill & Steven W. Gangestad: "The Evolutionary Biology of Human Female Sexuality", Oxford University Press: Oxford, New York, 2008:
In theory, any host allele coding for a protein to which a pathogen could adapt could be subject to uctuating selection (e.g., Tooby, 1982). In practice, selection on host alleles coding for components of immune defense seems the most likely candidate to be “yanked around” by coevolution with pathogens. Major histocompatibility complex (MHC) alleles code for cell-surface markers that components of the immune system use to detect self- and non-self-peptides. At particular points in time, individual alleles may be bene cial in defense against particular pathogens (e.g., Lohm et al., 2002). Temporally varying dynamics of host and pathogen populations could lead to changes in the prevalence of individual MHC alleles, as well as maintenance of MHC genetic variation, particularly in concert with frequency-dependent selection (Hedrick, 2002; though, as we discuss later, heterozygote superiority may well importantly contribute to the maintenance of MHC diversity in humans as well; see Hedrick, 1998; Black & Hedrick, 1997; see also Geise & Hedrick, 2003). Other components of the immune system could similarly be involved in host-pathogen coevolution. p151

In some pair-bonding birds, male primary partners’ quality affects extra-pair copulation by females. Estrous females paired to low-quality males are more likely than other females to copulate outside the pair bond and with a male of higher quality than the main partner. Evidence on humans suggests a similar pattern with respect to female attraction to extra-pair males. Estrous women partnered to men who are physically unattractive, who evidence developmental instability, or who possess genetic incompatibilities (at major histocompatibility complex loci) are more strongly attracted to extra-pair men compared with estrous women partnered to men without these features.
These patterns in estrous women are consistent with the view that women possess estrous adaptations that were shaped, ancestrally, in the context of extra-pair copulation. Other evidence for these adaptations include the fact that women’s mate preferences for putative signals of quality are enhanced at estrus in the context of women evaluating sex partners but not long-term mates, weakened commitment by estrous women to their primary partners, and greater openness to opportunistic sex with attractive men during estrus. p 327

To provide more of these findings, without endorsing them, that fall along the lines of the original claim inquiry:

That is of course not the only counter argument, since it lacks perspective:

“Some researchers have argued, in print, that the female climax may be so unnecessary as to be on its way out. One unlucky lurch of the evolutionary wheel, and those fibers may fire no more” (Angier [1999] 2000: 71). [cited from Venla Oikkonen: "Gender, Sexuality and Reproduction in Evolutionary Narratives", Routledge: London, New York, 2013, p88.]

Female orgasm is illustrative of the adaptationist narrative logic because it occupies an ambiguous position between the realms of reproductive and nonreproductive pleasures: it neither necessarily excludes nor necessarily includes a reproductive act. As literary scholar James A. Steintrager points out, “unlike the male orgasm, which links the lure of pleasure to the survival of the species in a seemingly unproblematic fashion, the function of female orgasm is not so obvious” (Steintrager 1999: 26).2 That female orgasm is understood as a narrative challenge is suggested by the sheer number of adaptationist accounts offered by scientists—Elisabeth A. Lloyd (2005) counts 19—which all try to incorporate female orgasm into the larger evolutionary narrative. My intention here is not to evaluate the plausibility of any particular theory, but to provide a brief overview of some of the most popular explanations of female orgasm in order to demonstrate the narrative trouble that ensues when potentially nonreproductive behaviors are embedded within an adaptationist framework.

As Lloyd painstakingly documents in The Case of the Female Orgasm, the vast majority of scientific explanations of female orgasm account for it as a (once) useful trait that got selected at some point in our evolutionary history. A classic among these explanations is the pair-bond account, most famously advocated by Desmond Morris (1967). Morris’ account of female orgasm reflects the popular “Man the Hunter” theories of the 1960s that positioned the invention of hunting as a key evolutionary event that led to the development of social skills and thus to the emergence of modern societies. Hunting was also typically credited as having introduced the gendered division of labor, thereby placing men as the proto-breadwinners and women as their dependent partners, an arrangement understood to encourage monogamy. Most versions of the pair-bond account assume that female orgasm appeared with the monogamous family unit, encouraging women to commit themselves to only one male by creating an emotional bond (Lloyd 2005: 44–76). Lloyd notes that scientists have also sought strictly physiological explanations. For example, the so-called “antigravity” hypothesis suggests that female orgasm encourages a woman to stay horizontal after intercourse and thus minimizes the amount of sperm escaping from the vagina (Lloyd 2005: 57–60). The so-called “upsuck” hypothesis, on the other hand, posits that the vaginal cramps during an orgasm help a woman “suck” the sperm toward the ovaries, thereby increasing fertility (Lloyd 2005: 179–219). Still others have combined physiological and psychological explanations. Frank Beach, for example, has suggested a somewhat complicated chain of events, leading from the introduction of bipedalism to the subsequent repositioning of the vagina further to the front, to the invention of face-to-face intercourse, to increased stimulation of the clitoris, and thus finally to the emergence of female orgasm (Lloyd 2005: 67–70). In this scenario, female orgasm appears as a kind of evolutionary accident.

Many of these accounts show a clear androcentric bias, such as the assumption that women trade sex for emotional fulfillment. However, it should be noted that feminist adaptationist accounts of female orgasm are not structurally different from male models. For example, Sarah Blaffer Hrdy’s (1981) famous suggestion in The Woman that Never Evolved that female orgasm did not encourage monogamous behavior but in fact rewarded females for actively seeking multiple partners (more sex, more pleasure) reproduces the same narrative logic that motivates the theories she critiques. In Hrdy’s account, females’ search for orgasmic pleasure serves reproductive ends as it helps confuse paternity and thus reduce the risk of infanticide by competing males (Hrdy 1981: 174). While debunking stereotypes of women as coy and passive, feminist sociobiology yet perpetuates, to quote anthropologist Susan Sperling, “the narrative logic of functionalist models of primate behavior” (Sperling 1991: 26) that “collapse variation into theories of male and female reproductive strategies” (Sperling 1991: 27). This suggests that a critical feminist theory of evolution needs to challenge the epistemic monopoly of the reproductive imperative in order to fully account for variance in female experience and the fickleness of pleasures like female orgasm.3 [p 133–5]

Not the answer you're looking for? Browse other questions tagged sexuality genetics .