Did the US spend 7 trillion in the Middle East?

In response to the recent train accident in Washington State, the current President of the United States, Donal Trump, made a claim in a tweet that the US has spent $7 trillion in the Middle East.

Is this true, and if so what's the (rough) breakdown? 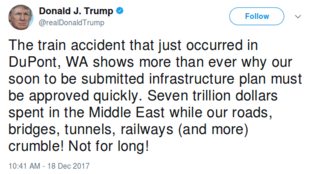 The train accident that just occurred in DuPont, WA shows more than ever why our soon to be submitted infrastructure plan must be approved quickly. Seven trillion dollars spent in the Middle East while our roads, bridges, tunnels, railways (and more) crumble! Not for long!
10:41 am - 18 Dec 2017

The statement is rather vague. Spending since when? Which expenditures count (cost for wars, cost for foreign aid, ...)? What counts as the middle east? And of course it doesn't factor in any potential benefits to the US.

That being said, I could find no source for the 7 trillion number. But Trump did make a similar claim last year (back then it was 6 trillion).

Politifact ruled that claim half-true. They name multiple studies which put the cost anywhere from 1.6 trillion to 6 trillion. But the higher estimates include money that is going to be spend in the coming decades on medical care for veterans, etc. The time frames on the estimates are also slightly different (all start in 2001 though), and they also differ in which wars they take into account.

Trump is citing the high-end estimate of credible analyses of spending associated with the wars in Iraq and Afghanistan. Yet he is confusing money that’s been spent with money that researchers say will be spent.

The DoD estimates that wars in the middle east since 2001 only cost 1.5 trillion.

According to checkyourfact.com, the White House provided a study which names 4.4 trillion (as well as 5.6 trillion until 2056 including medical costs and 7.9 trillion including interest) to back up the claim. The study has the sub-title of "A Summary of the $5. 6 Trillion in Costs for the US Wars in Iraq, Syria, Afghanistan and Pakistan, and Post-9/11 Veterans Care and Homeland Security", which summarize the results pretty well.

15
Does offshoring ultimately help the offshoring-country's poor and middle classes?
2
Has the federal reserve issued 16 trillion dollars in bailouts?
8
Does the US have $54 trillion?
6
Do US congressman spend most of their time fundraising?
0
Is the US debt between 15 and 20 trillion dollars?
18
Does the Australian government spend more on welfare than on defense?
12
Does the US spend more on prisons than public education?
11
Do rich Americans pay a lower portion of their income in federal taxes than the middle class?
9
Does the Caravan have Middle Easterners?
7
Did the US government officially spend $41m to make Milosevic lose the 2000 elections?