Are there fewer than 500 people researching antibiotic resistance?

The emergence of anti-microbial resistance in the bugs that cause infectious diseases has been called the biggest threat to modern medicine. For example:

England’s chief medical officer has warned of a “post-antibiotic apocalypse” as she issued a call to action urging global leaders to address the growing threat of antibiotic resistance.

Professor Dame Sally Davies said that if antibiotics lose their effectiveness it will spell “the end of modern medicine”.

That sounds pretty serious. So I was surprised to read the following claim in PharmaForum:

This seems incredibly small. The pharmaceutical industry in the UK alone, for example, employs about 25,000 people in R&D according to the ABPI and the UK is nothing like the top country for drug R&D.

Such a potentially serious problem might be expected to attract significant resources. Is the estimate of fewer than 500 people in R&D worldwide on the topic of antibiotic resistance credible?

This claim is pretty hard to specifically pin down. What is a "scientists studying antimicrobial resistance" exactly? Do we limit the definition to professors who have been exclusively focused on AMR for 10 years or more? Does a grad student who is doing their masters thesis on a topic tangentially related to AMR count? Either way, I cannot do a world census of scientists who work on a particular topic.

What I can do is examine the number of papers published yearly on AMR. According to Google Scholar, 2720 scientific papers were published in 2016 that had the word "resistance" in their title as well as either "antibiotic" or "antimicrobial."

This is probably a low estimate of the number of papers on the topic. If I allow the word "antibacterial" I get an additional 50 papers. This search does not include papers that are about AMR but do not have these words in the title, (for example Colistin resistance gene mcr-1 harboured on a multidrug resistant plasmid.)

It would be possible, but time consuming, to compile a list of the authors of those 2720 papers. Some scientists certainly published multiple papers on AMR in a single year, and duplicate names would have to be removed. On the other hand, most of the papers on that list have multiple authors, usually 3-5. I expect the number of papers to be of the same order of magnitude as the number of authors. A single scientist may have a handful of authored papers in a year, but share authorship with a handful of people.

If we define a "scientist studying antimicrobial resistance" as someone who has authorship on a paper on the topic in the past year, I find the claim very hard to believe. A more exclusive alternate definition that would make the claim true exists. 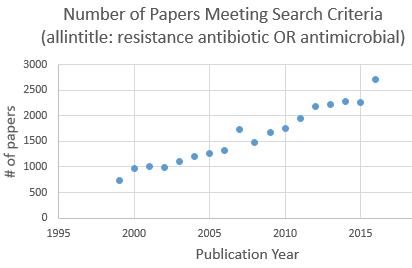 Summary: I present a simple method for estimating the number of published scientific papers about AMR. The number of papers is 5.5 times higher than the 500 in the claim. This seems inconsistent.

I am being very careful while writing this answer to stick closely to my evidence, and avoid saying things that are not supported by my evidence. My evidence implies, but does not prove. My logic is partially based on assumptions about scientific research that are based in my personal experience.

This is from a researcher in the field, and while it doesn't give any hard numbers, it does support the general idea of few US researchers having been involved, at least for quite some time:

The Veterans Administration has a wonderful research support system that allowed me to get started and funded me virtually constantly for the 16 years I worked there. I will always be grateful to the VA for their constant support. Their approach should be contrasted to that at the National Institutes of Health (NIH) where there was, for many years, a bias against funding antibiotic resistance research. They felt that antibiotic resistance was not important or at least that it was somehow not good science. If it was important, the pharmaceutical industry and not the NIH should fund it. The pharmaceutical industry was not so interested in resistance in those days either since it usually did not do any good for marketing their products. I submitted grant requests to the NIH – but they were mostly not successful. It wasn’t just me. There were only a very few of us in the United States working on antibiotic resistance and we all knew each other. One reason there were so few of us was that it was so difficult to obtain support for our research. When we got together we realized that we all had the same problem. In 1986 we met and began to investigate the NIH and their funding practices as far as antibiotic resistance was concerned. We confirmed that they did not fund much research in the area and requested a meeting with them.We found that one major reason they did not fund resistance research was that they had very few people working on reviewing grant proposals who were even familiar with antibiotic resistance. Since the NIH relied entirely on the grant reviews provided by their reviewers, resistance researchers were left out. We actually held several small workshops with the NIH over the next 5 or 6 years. One of our main recommendations to the NIH was to establish a special peer group to review grant requests in the area of antibiotic resistance. As a result of our efforts, we were the subjects of an article in the prestigious journal Science that referred to us as disgruntled scientists. Finally, 20 years after our group first met, the NIH established the very peer review group we recommended. Any discrimination against resistance research in the NIH seems to be gone, but grant money is still very hard to come by.

In 2008, the Pharmaceutical Research and Manufacturers of America (PhRMA) reported that their industry was sponsoring almost 22,000 clinical trials with drugs for cancer being the most common (almost 7,000 trials). PhRMA listed no trials for antibiotics (even though there are a few going on). This should give you an idea as to the priority industry is giving to antibiotics these days.

Data on lack of new antibiotics development is much easier to corroborate, but I think it probably says something about researchers too. From a 2017 review:

Most pharmaceutical companies have stopped or have severely limited investments to discover and develop new antibiotics to treat the increasing prevalence of infections caused by multi-drug resistant bacteria, because the return on investment has been mostly negative for antibiotics that received marketing approved in the last few decades. In contrast, a few small companies have taken on this challenge and are developing new antibiotics.

There is one recent review of funding in this area. Unfortunately it doesn't report any totals. Using its supplementary data I've quickly calculated the US funding to be about $900M and the EU funding to 1.4B+3.2B, but the latter 3.2B is for clinical trials support, so I'll leave it out... in estimating the number of grants. I'll use the US average grant value of about $400k/grant. That would give us 2,250 US grants and 3,500 EU grants. So, these would definitely support more than 500 researchers (even if we just count the PIs).

As the review notes however, most of the projects funded are preclinical research... and the quick-and-dirty total figures (I came up with) aren't all that impresive considering the ~$700M bill for pushing a single new antibiotic to market.

Not the answer you're looking for? Browse other questions tagged pharmaceutical research .

4
Are there no courses to teach medics how to handle pharmaceutical marketing?