Did the White House Press Secretary Lie about a Pie?

Apparently, the White House Press Secretary tweeted a picture of a chocolate pecan pie over the Thanksgiving Holiday. She claims that she made the pie and took a picture of it. 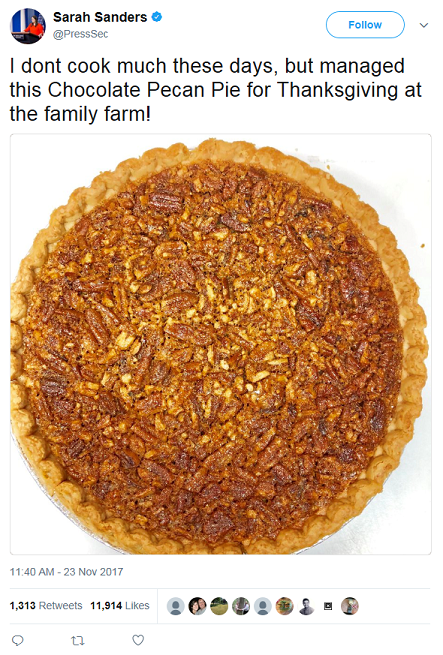 People are claiming that this is a stock photo - apparently due to the white background and perfect looking pie. I haven't seen any actual claims that show the original pie photo that is the same as the one in the tweet.

Is the pie picture an original picture as the White House Press Secretary claims or is this picture a copy that she found on the internet?

I've tried googling and reverse image searches but I only get the original tweet, re-tweets and stories about the tweet. It may be a stock photo that isn't available on the internet.

According to this Gizmodo article, this controversy was started by a Twitter user who seemed to believe the photo was taken from PBS based on the URL of where the photo was hosted:

The amateur sleuths of Twitter thought that they had uncovered a Thanksgiving conspiracy today, claiming that White House Press Secretary Sarah Huckabee Sanders stole a photo of a pie from PBS and posted it as her own. 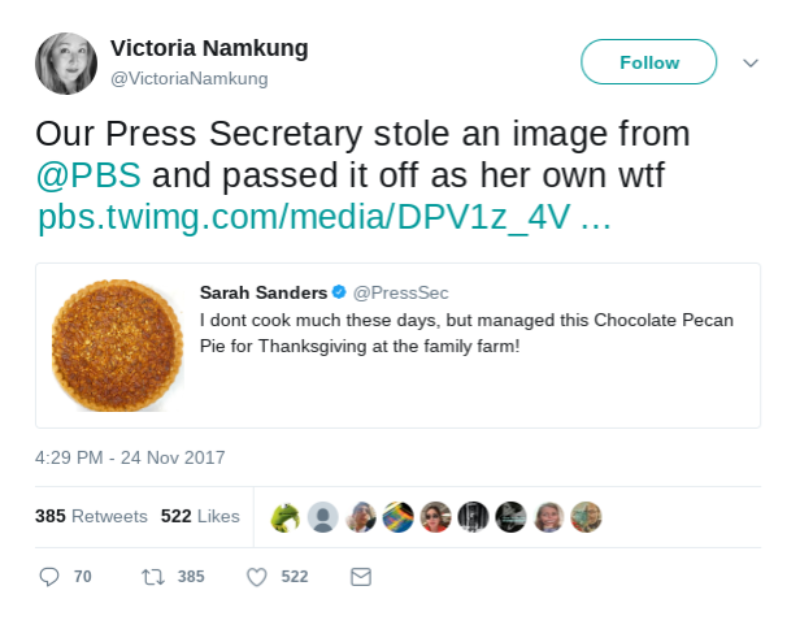 The article points out that the photo is hosted on a Twitter subdomain:

But the thing is, pbs.twimg.com is just a subdomain that Twitter uses to host photos. It has absolutely nothing to do with the Public Broadcasting Service.

Gizmodo also claims that reverse image search reveals that the image is an original. I double-checked, and that appears to be the case.

While this is not definitive evidence in itself that Mrs. Sanders made the pie herself, I think it rules out the theory that she used a stock image.

As always, extraordinary claims require extraordinary evidence, and I don't see any evidence that she used a stock photo or that it wasn't she who made the pie.

23
Do Crisis Pregnancy Centers lie about the results of pregnancy tests?
65
Did Fox News win a court case for the right to lie?
7
Did Sean Spicer tweet a password twice in two days?
3
Were the Secretary of State divestiture rules applied inequitably to Rex Tillerson vs John Kerry?
7
Did the Obama administration ever attempt to ban Fox News from a Press Pool?
9
Did White House staff have problems booking a hotel for Trump for G20?
3
How much does the White House pay to their employees?
10
Did Trump reveal the identities of a SEAL team in Iraq?