Did 60% of polled South Africans say the country was better run during apartheid?

I have found several sites claiming that a study shows that over 60% of polled South Africans said the country was better run under apartheid - most notably, a 2002 Guardian article:

In a rebuke to the African National Congress government, more than 60% of all South Africans polled said the country was better run during white minority rule.

The study was run as a series of 'Afrobarometer' polls. However, having looked at their website, I am unable to find the poll.

Was there a poll in which 60% of participating South Africans said the country was better run under the apartheid regime?

The Guardian article is from 2002.

I owe a huge hat-tip to @Klanomath for finding the original 2002 survey where I failed, including a code book with the list of questions.

The questions cover a lot of different ground on whether the respondent approves of particular forms of government. Some of them compare between the regimes on specific issues, such as able to enforce the law, corruption, crime and safety. None ask directly about which was "better run"

Afrobarometer have continued to ask similar questions over several years (until 2008), and they include the 2002 data in their later reports, so it is possible to see what the original results were, and compare them over time. The rest of this answer is using more recent reports. 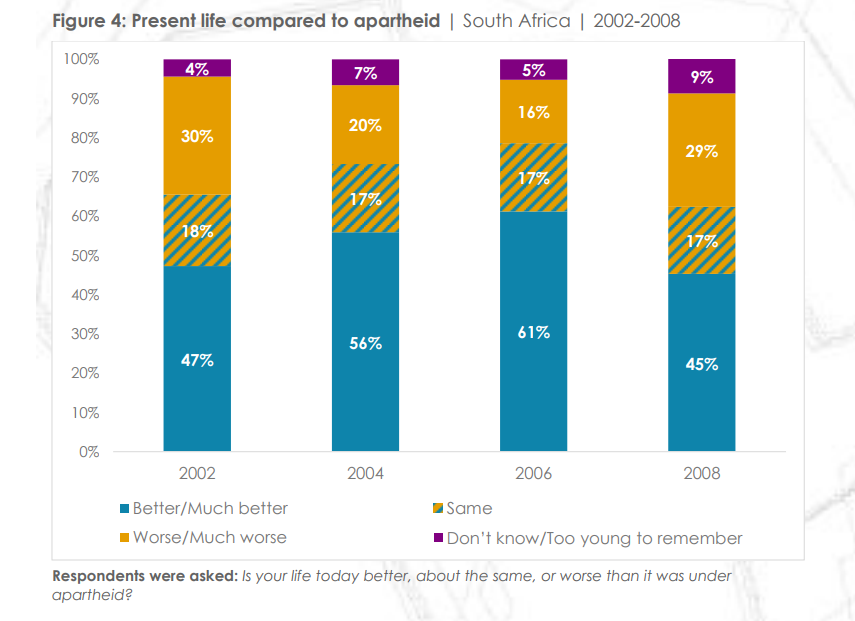 The question is not "better run", but that the respondent's life was better.

The 2002 figures do not show that over 60% of people responded that their life under apartheid was better - only 30% claimed that. [Note: The question is inverted from original article, so you should be looking at the "Worse/Much Worse" section of the chart to see this.]

Table A2 in the Appendix explores some more specific questions asked in 2000 - in some them, the current system of government rated much more poorly than the apartheid regime. For example, 65% of respondents said people's safety from crime and violence was worse or much worse than under apartheid.

Not the answer you're looking for? Browse other questions tagged government africa .

11
Did Brock Chisolm, the first director of the United Nations WHO, say this anti-individualism quote about a "world government"?
7
Did Milton Friedman say that nothing was so permanent as a temporary government program?