Is tobacco smoke an antioxidant?

While reading the works of a popular nutrition guru who happens to be a food chemistry scientist I stumbled about his claim that the antioxidant theory of health benefits derived from them was completely dead by now.

He reinforced that claim with an interesting comparison:

"If the positive effects to health brought on by antioxidants were true, than health gurus should advertise people to smoke much more, since tobacco smoke is actually a quite powerful antioxidant."

As intrigued as perplexed I traced this info back to this paper:

This paper describes yet another property of tobacco smoke, its antioxidant activity. Our primary concern was to find out whether or not smoke initiates or promotes the formation of radical peroxides which would in turn lead to lipid peroxidation. Utilizing a system which involves the coupled oxidation of beta-carotene and linoleic acid, and which serves as an assay for antioxidants, it was found that smoke did not contribute to the oxidative destruction of beta-carotene, but rather behaved as an antioxidant.

-"The Antioxidant Activity of Tobacco Smoke"

Seeing the clear conflict of interest by at least one of its authors (working for Big Tobacco) and the whole venue it was published in might lead to an easy dismissal.

But is it easy? Has tobacco smoke strong antioxidant activity?

No, tobacco smoke doesn't act as an antioxidant in the body. Quite the opposite - it causes oxidative stress and introduces free radicals.

Here are a series of references to support this claim. (I have added a few to show it isn't a just single study, like the original question.)

Note: The original paper in the question was dated from 1975 and published in a German journal. This was a period in which the tobacco industry had an undue influence on scientific research in Germany. I looked for citations, to see how people reacted to the paper and only found one cite that mentioned it in passing, so it doesn't seem to have been taken very seriously.

It makes sense to me that this "guru" knows about the antioxidizing properties of smoke because, as a food chemistry scientist, he is likely to know about this in the context of using smoke for food preservation.

Smoke from burning plant materials, usually wood, has helped to preserve food ever since our ancestors mastered fire. Smoke’s usefulness results from its chemical complexity (p. 448). It contains many hundreds of compounds, some of which kill or inhibit the growth of microbes, some of which retard fat oxidation and the development of rancid flavors... [B]ecause some smoke components are known to be health hazards (p. 449), smoke is now used less frequently as a full strength preservative, and more often as a lightly applied flavoring...

Many of the phenolic compounds in wood smoke are also antimicrobials, and phenol itself is a strong disinfectant. The phenolic compounds are also effective antioxidants, and slow the development of rancid flavors in smoked meats and fish. In addition to antimicrobial compounds, smoke also contains antihuman compounds, substances that are harmful to our long-term health. Prominent among these are the polycyclic aromatic hydrocarbons, or PAHs, which are proven carcinogens and are formed from all of the wood components in increasing amounts as the temperature is raised.

These phenolic compound are produced by combusting lignin, which is a component of all plant material including tobacco (references: "Studies on Tobacco Lignin", "The Chemical Components of Tobacco and Tobacco Smoke"), so they will necessarily be a component of tobacco smoke as well.

The takeaway message here is that although there are antioxidants such as phenolics in tobacco smoke, there are also many carcinogens (citation: "Tobacco Smoke Carcinogens and Lung Cancer"). The negative health effects of these clearly outweigh any positive antioxidant effects. So tobacco smoke being bad for you probably has nothing to do with the antioxidants it contains.

So let's take the research paper from at OP's post at face value. This is the the authors' table summarizing the antioxidants found in tobacco smoke: 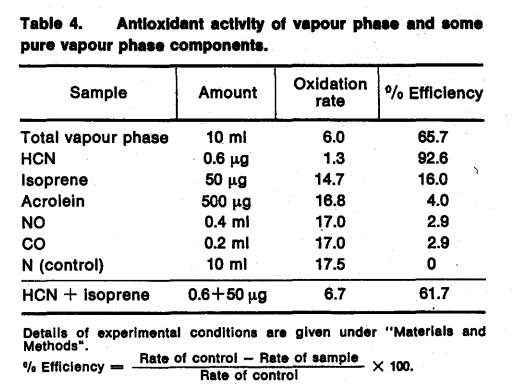 Most of the claimed antioxidant effects are due to HCN and isoprene; the paper says

As shown in Table 4, HCN exhibited the highest antioxidant activity (even more so than total vapour phase) accounting for 92 % of total inhibition. Isoprene, one of the major unsaturated compounds, surprisingly had little effect even at a concentration several times that found in smoke vapour. A negative synergistic effect is seen where HCN loses its efficiency when combined with isoprene to give an activity similar to that of the total vapour phase. This synergism probably accounts for the fact that pure HCN by itself had a higher activity than total vapour phase.

Obviously HCN is very toxic, causing tissue hypoxia which (at non-deadly levels) has quite a few manifestations including neurological, respiratory cardiovascular and thyroid defects. But if you want to get its full antioxidant "benefits", you're probably better off inhaling it apart from tobacco smoke... just from that analysis alone. I'm not seeing HCN vaping being very popular though.

What about isoprene? IARC says there's no human data for it but

Isoprene was tested for carcinogenicity in male mice and in male rats by inhalation exposure in one-year studies. In mice, exposure to isoprene resulted in increased incidence of benign and malignant tumours of the lung, liver and forestomach and of Harderian gland adenomas. The study by inhalation in rats was inadequate for an assessment of carcinogenicity (IARC, 1994).

As for the rest of the substances in that table, acrolein is an irritant. Carbon monoxide should be familiar to most. Probably the only thing there with a known therapeutic effect is nitric oxide, but even then, its effects are complex and dose-dependant. The poisonous effects of CN, CO, and NO share a common pathway in the inhibition of cytochrome c oxidase (COX), a mechanism in cell respiration, although the inhibition by NO is reversible.

So even if these components can function as antioxidants, this is basically a smoke and mirror exercise by associating a list of substances mostly with no health benefit with a word that most people think as good because the usual, dietary antioxidants talked about in the press are vitamins (C, E) and their precursors like beta-carotene etc. And even for those, the story is not always "more is better".

Also according to some recent research, isoprene ranks first among the contributors to a theoretical cancer hazard index in tobacco smoke (using animal model, I think) while acrolein and hydrogen cyanide overwhelmingly account for the non-cancer health hazards. 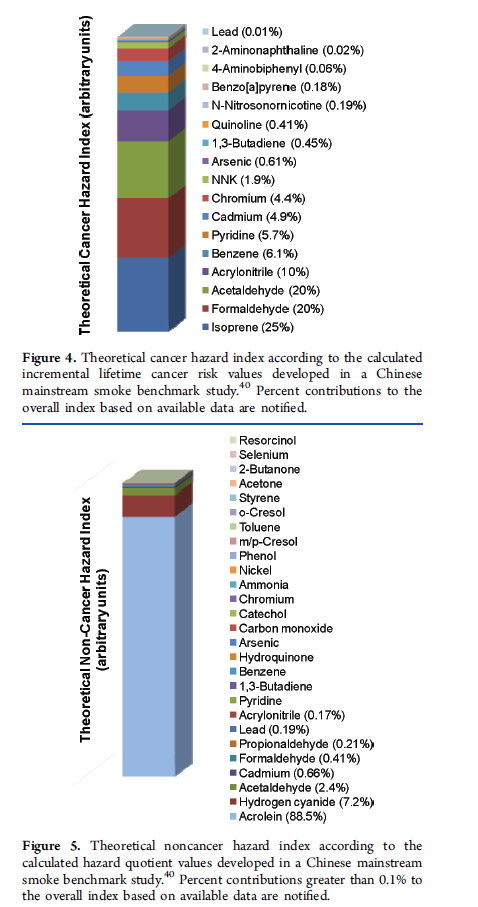 Amusingly, this last paper is also from a German consultant for tobacco companies. The venue is a bit more respectable though. The data in these two graphs is entirely from the Chinese paper cited (I've checked it), whose authors' declare no conflict of interest... even though the all seem to work for either a US Big Tobacco company or an obscure institute belonging to CNTC. So while the exact quotients here aren't that certain (not just because of the source, but also because of the methodological limitations), it's interesting to see how the same substances now fly under a different flag.

Not the answer you're looking for? Browse other questions tagged tobacco antioxidant .

2
Snus or smoking tobacco: Which one is more harmful
2
Do people smoke only due to psychological reasons?
28
Does Marijuana deposit four times the tar in the lungs as tobacco?
13
Does fetal tobacco smoke exposure cause permanent harm?
10
Does tobacco kill half of its consumers?