Do 7 out of 10 Australians support drug testing welfare recipients?

On the Liberal Party of Australia's Facebook feed they posted an image that makes the claim that "7 out of 10 Australians support drug testing welfare recipients".

Is this true? What is it based on? Is it quality data or a selective survey?

Also are there other surveys or techniques that contradict the result here.

Note the claimed article is behind a paywall, but I would assume some other reference exists 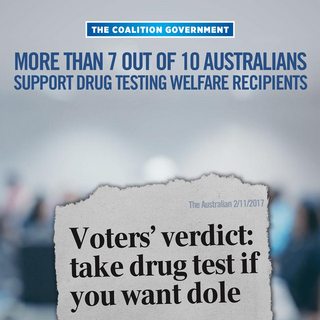 I found the article cached here and the image here if you wanted to look and didn't trust Google cache.

There were 1623 humans in total with at least one person identifying as one of four political parties (but the number of each w,x,y,z is unknown). My guess is these were landline phone calls to homes during the day as it's Newspoll, so not really an accurate sample of the population. 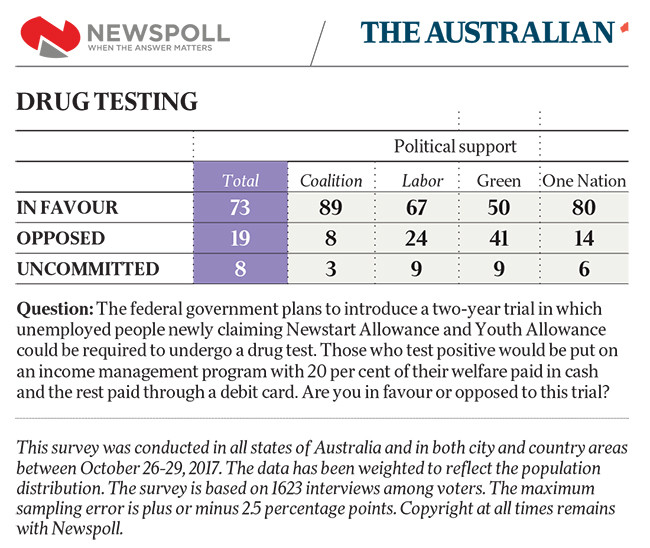 Question: The federal government plans to introduce a two-year trial in which unemployed people newly claiming newstart allowance and youth allowance could be required to undergo a drug test. Those who test positive would be put on an income management program with 20 per cent of their welfare paid on cash and the rest paid through a debit card. Are your in favour or opposed to this trial?

This survey was conducted in all states of Australia and in both city and country areas between October 26th-29th, 2017. The data has been weighted to reflect the population distribution. The survey is based on 1623 interviews among voters. The maximum sampling error is plus or minus 2.5 percentage points. Copyright at all times remains with Newspoll.

Credited to The Australian.

Not the answer you're looking for? Browse other questions tagged politics australia welfare .