The European Union is, among many other things, a large free trade block with few barriers to cross-country trade within it. The United Kingdom has voted to leave the EU and is currently trying to negotiate the terms of that departure including the future terms of trade with the remaining block.

This isn't going well. The future options for trade range from staying in the "single market" (that is preserving the current trading terms as some other non-EU countries like Norway and Switzerland do) to just leaving the union with no deal at all and reverting to the default World Trading Organisation (WTO) terms of trade (see this Economist explanation of what this means).

One of the reasons for problems in the negotiations is that the government is split on which option is best. Some argue that no-deal (ie WTO terms) will be a disaster; others seem to think it is the best option.

So I was surprised to read the following aside in an article arguing that the market for financial services will not suffer much as the UK's position is so strong that the EU need the City of London more than the City needs the EU:

The worst-case scenario is no-deal. Whilst Britain certainly does not want that, we must remember that 90 per cent of world trade is conducted under WTO terms – the no-deal scenario.

While the article itself was making a case specifically about financial services, the claim is much broader. Clearly the claim matters as it bolsters the idea that a no-deal Brexit might not be that bad. Other sources are skeptical. For example, this analysis of the WTO database suggest that only one country (Mauritius) trades solely under WTO rules. The BBC summarises some of the conventional thinking here.

WTO rules don't sound so scary if everyone else is already trading under them. But the article offers no references for the 90% claim. So is it true? Is 90% of world trade under WTO terms?

PS The debate about whether Brexit is a good idea is controversial. Lets keep this question to the factual point at issue and not stray into the broader debate.

Well, the percentage is most likely lower, but it's hard to say (by) how much exactly.

For 2016, the global trade figure in goods/merchandise is $15.46 trillion, while the intra-EU trade is €3.1 trillion. Assuming 1:1 exchange parity that makes intra-EU trade about 20% of world total. Even assuming the rest of the world is just WTO (obviously it's not, you'd have to subtract Nafta etc.) that would be only 80% of the good/merchandise trade being WTO-only.

I don't know what the corresponding service trade figures are precisely*, but I do know that overall trade in services is roughly 1/4th of the world trade. I suspect that the intra-EU service trade is actually higher as a percentage of the WTO one because of all the facilities (like free movement of people) provided by EU in this respect. But even in the worst (opposite) case, let's assume all world trade in services is WTO-only. That makes the intra-EU trade (in goods) 15% (=0.2*0.75) of this putative total trade, and that percentage is still above the 10% needed to meet the 90% WTO-only claim.

*) Actually, I do know that the world trade in services for 2016 is $4.7tn. So that makes it 23% of the world total trade, which makes the 25% used above a conservative estimate for our purposes.

The Nafta trade figure seems to be $1.1 trillion for 2016, so that plus intra-EU trade is 27% of the world total, so only 73% would be WTO-only. This 1.1 trillion might be the total trade figure for goods and services (the source is not explicit) so it might be apples-to-oranges compared to the other two figures form the previous paragraphs.

From another angle, as of 2017, there are 445 RTAs (regional trade agreements) active as reported to the WTO. The chances that only 10% of the world trade happens in these seem astonishingly low, although WTO doesn't give a figure. They do however give a map of the countries with the number of RTAs they participate in. There are only 4 countries in Africa that participate in no RTAs at all. 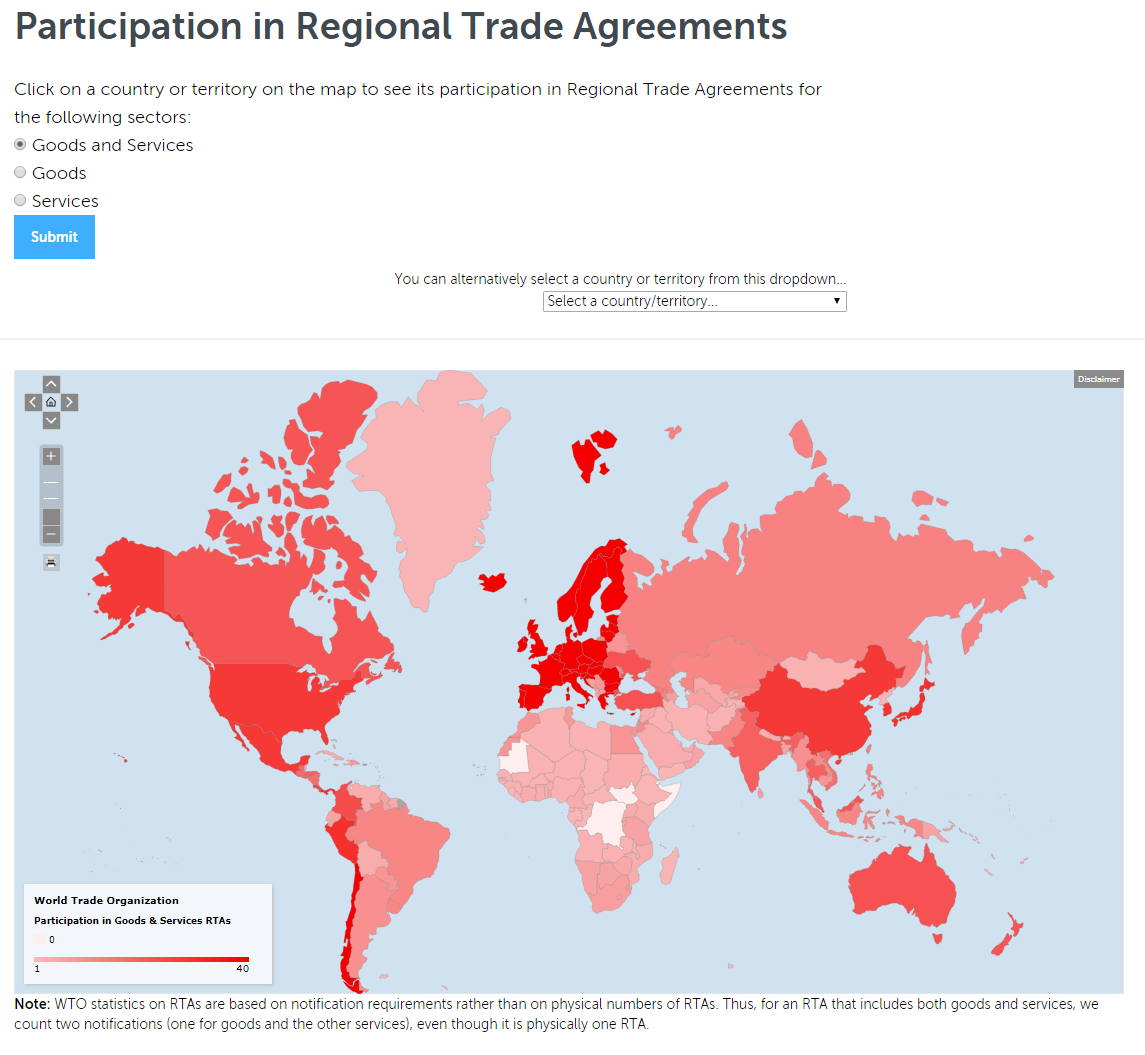 We also know that approximately half of world trade happens under preferential tariffs, but this isn't all that helpful because WTO itself allows such under GSP.

I was able to find out how much of Britain's trade was conducted on WTO-only terms only (which is probably far more relevant for Brexit). That figure is at most 18%... according to one estimate. I think the yellow area include both Canada, Japan and the TTIP though, the latter still is in limbo (as far as I can tell it hasn't been called off by Trump, unlike the Pacific one). So even this is not too sure. 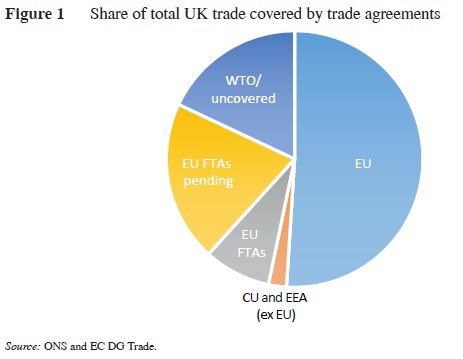 Figure 1 puts these tasks into perspective. Just over half of UK trade is with the EU. If we add the other countries in the European Economic Area (EEA) and the Customs Union, the share of trade reaches 53%. Including those countries that have existing PTAs with the EU covers 62% of UK trade. Finally, including countries which are currently negotiating PTAs with the EU covers 82% of total UK trade. Most of the remaining 18% of UK trade is mostly covered by the rules of the WTO. [footnote:] All data are from the IMF Direction of Trade Statistics 2015.

The BBC has a map of countries which trade mostly on WTO terms with UK (e.g. a US-EU treaty that covers only the language used on wine bottles is excluded from consideration.) But this map/list lacks trade volumes. 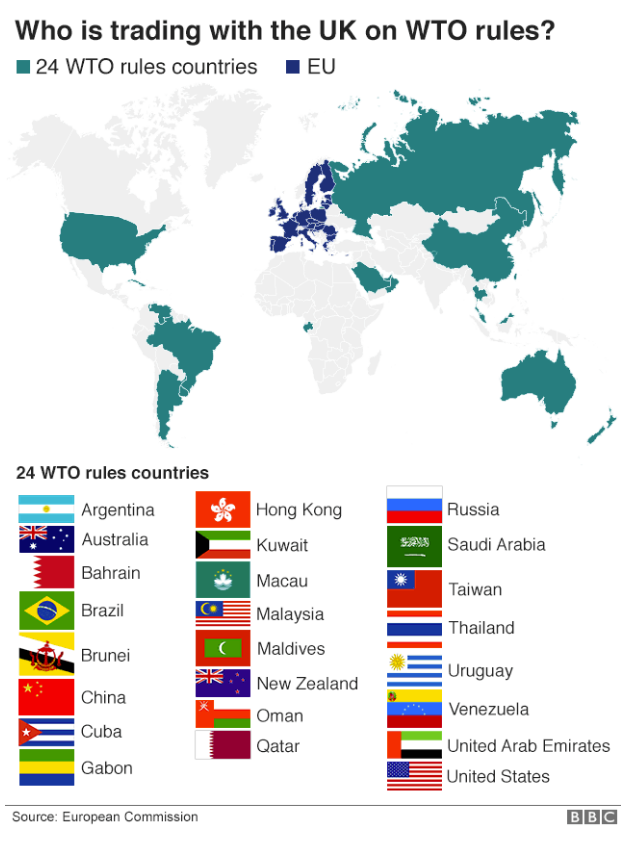 Not the answer you're looking for? Browse other questions tagged politics economics united-kingdom trade .

28
Are Fair Trade products guaranteed to be 'fairer'?
21
Does the Bilderberg Group have influence on world events?
57
Did the UK slip to sixth largest world economy from fifth, less than 24 hours after the EU referendum vote?
8
US trade deficit and the iPhone
1
Quasi-consensus among economists that neither trade deficits nor surpluses are necessarily 'good' or 'bad' for an economy?
7
Would a no-deal Brexit cause the grocery shopping bill of an average UK family to rise by £800/year?
6
Is only 13% of the UK economy and only 8% of its businesses involved with european Union trade?
9
Did the USSR government trade 17 submarines and three warships for three million dollars in Pepsi?
19
Does China receive billions of dollars of foreign aid and special WTO status for being a "developing country"?