A recent report by the Lancet Commision on Pollution and Health led to some scary headlines in the news:

Pollution linked to one in six deaths

Pollution is killing millions of people a year and the world is reaching 'crisis point', experts warn

That last headline doesn't appear to be a subeditor's exaggeration as one expert commenting on the report report is quoted as saying:

Air pollution is reaching crisis point worldwide, and the UK is fairing worse than many countries in Western Europe and the US,” said Dr Penny Woods, chief executive of the British Lung Foundation

and one of the authors said:

We fear that with nine million deaths a year, we are pushing the envelope on the amount of pollution the Earth can carry.

The same author also argued that:

Landrigan said the scale of deaths from pollution had surprised the researchers and that two other “real shockers” stood out. First was how quickly modern pollution deaths were rising, while “traditional” pollution deaths – from contaminated water and wood cooking fires – were falling as development work bears fruit.

So the report appears to conclude that things are getting worse and this is true even in the developed world where "modern" sources of pollution are rising.

But there is some reason to express skepticism. David Spiegelhalter, commenting on an earlier report about air pollution in the UK, analysed the reliability of the estimated number of deaths in the UK (estimated at 40,000/yr from air pollution, which is consistent with the later numbers in the new report) and found that the error bars were very wide. In addition he reproduced the following chart: 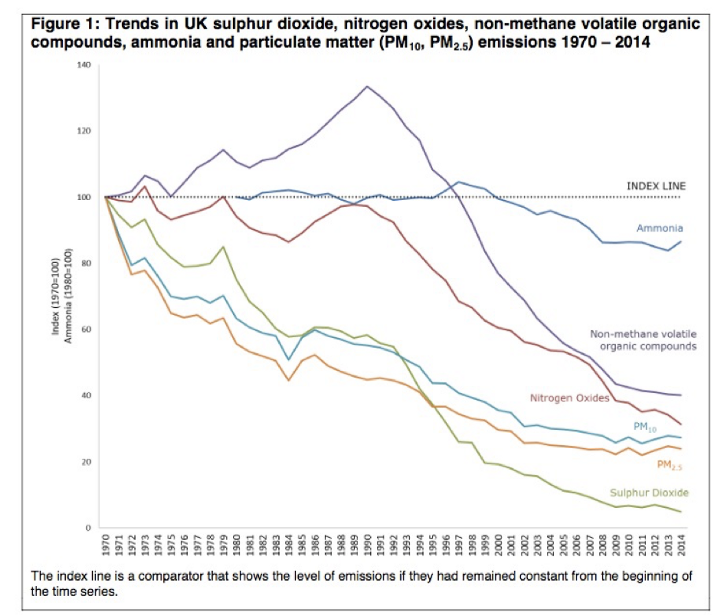 So, now we know where at least one of the popular media statistics on air pollution comes from — is it true that there is a ‘crisis’ in air pollution in the UK?

Fine particulates and nitrogen oxides have been falling steadily for decades, and are about a quarter of what they were in 1970.

So the ‘crisis’ in the UK is not because pollution is getting worse, but because there is more known about the potential harms, particularly from nitrogen oxides. But the UK is not representative of the rest of the world: many rapidly growing cities have experienced dramatically rising pollution levels.

So we have newspaper headlines and some experts claiming we are approaching a crisis and another expert claiming things are getting better but they look worse because our knowledge is getting better.

So the question arises: are we facing a growing crisis (especially in the developed world)? Or, since "crisis" is ill defined, are the major sources of pollution in developed world cities getting worse or better?

There is heavy pollution in some cities in the developing world. Delhi and Beijing are famous examples, but there are many more, and more people are affected than ever before because of population growth and urbanisation.

But the opposite is true in cities in the developed world. The UK graph you show goes back to 1970. But the situation in London was much worse in the 1950s (the Great Smog of December 1952 is widely known though a short-term weather pattern made things much worse) and worse still back in 1900. Take this chart from Our World in Data showing particulates in London over the longer term; it also shows Delhi is recently at levels London saw before WWII 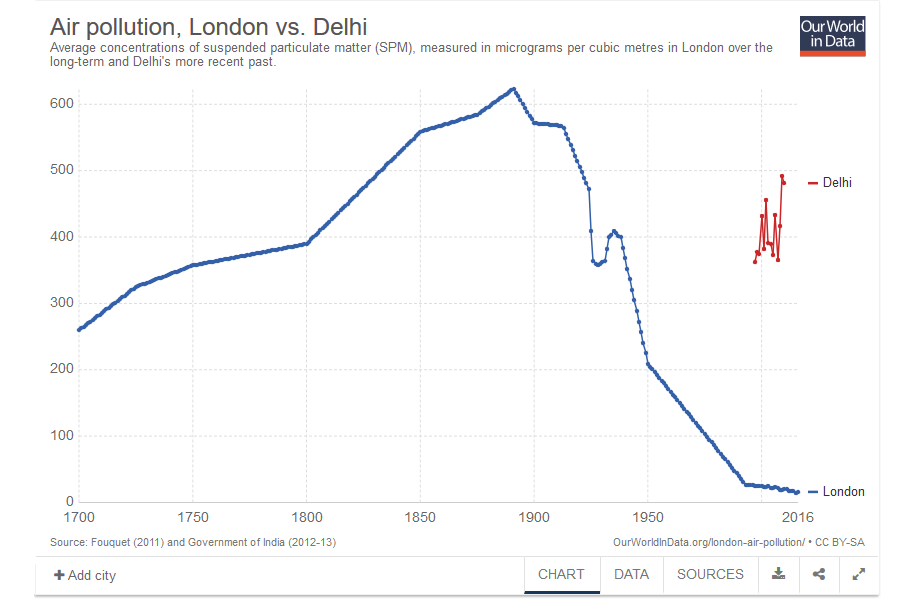 And it is not just London. Another famous example for pollution is Los Angeles. The following chart from EOS Earth & Space Science News - Urbanization and Air Pollution: Then and Now shows ozone and some other pollutants falling from the start of the graph in the 1960s, though often still above modern standards set more to drive further improvement than because there is a safe level of pollution 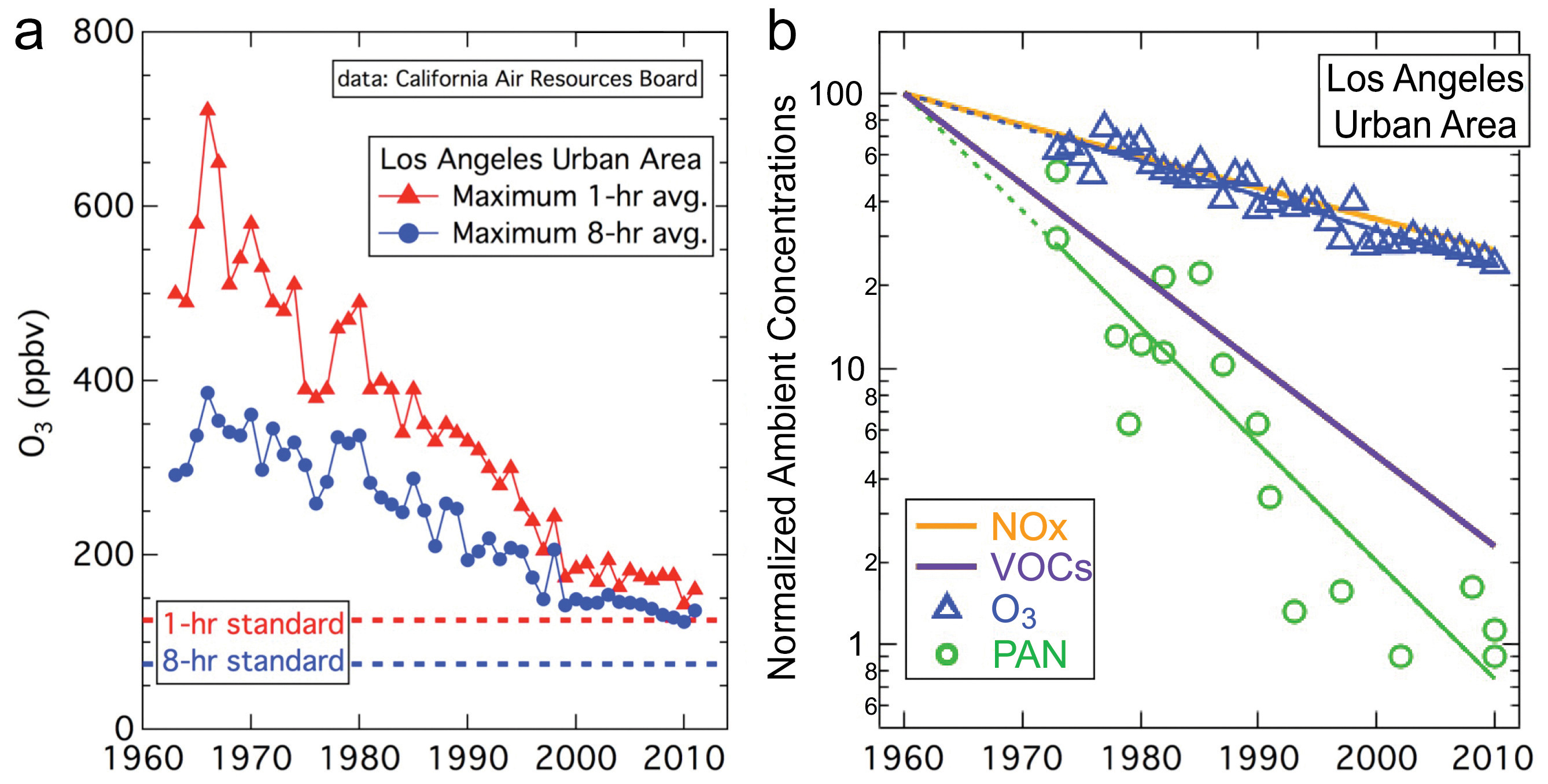 Not the answer you're looking for? Browse other questions tagged environmental-health environment pollution .

17
Is indoor air pollution higher than outdoor air pollution?
13
How dangerous are rare earth processing by-products?
5
Does particulate pollution in outdoor air kill tens of thousands every year?
8
To what extent do needle trees contribute to fine dust pollution?
68
Is there plastic microfiber in 83% of tap water?
7
Does each car in inner London cost society £8,000 in health and environmental cost over its lifetime?
2
Have few, if any, studies on the health effects of particulate air pollution measured the actual exposure to particulates?
6
Does dry air promote the spreading of respiratory viruses better than wet air, ceteris paribus?