Did Einstein say this about crisis?

There is an often quoted text allegedly by Einstein, about the way to confront and overcome a crisis:

Let’s not pretend that things will change if we keep doing the same things. A crisis can be a real blessing to any person, to any nation. For all crises bring progress.

Creativity is born from anguish, just like the day is born form the dark night. It’s in crisis that inventiveness is born, as well as discoveries made and big strategies. He who overcomes crisis, overcomes himself, without getting overcome. He who blames his failure to a crisis neglects his own talent and is more interested in problems than in solutions. Incompetence is the true crisis. The greatest inconvenience of people and nations is the laziness with which they attempt to find the solutions to their problems.

There’s no challenge without a crisis. Without challenges, life becomes a routine, a slow agony.

There’s no merit without crisis. It’s in the crisis where we can show the very best in us. Without a crisis, any wind becomes a tender touch. To speak about a crisis is to promote it. Not to speak about it is to exalt conformism. Let us work hard instead. Let us stop, once and for all, the menacing crisis that represents the tragedy of not being willing to overcome it.

There are countless websites where it appears (just for instance, here, here – where a partial, unsuccessful attempt of finding the source is made –, or in these “Life Lessons from Albert Einstein”), as well as several books. All of such sources that I have checked 1) don't give an actual, primary source; 2) seem to be quite far in topic from history of science and the like (they appear to be, mostly, sites and books of self-help and/or business-like advice).

On the other hand, neither this passage, nor parts of it, seem to be contained in Alice Calaprice's Ultimate Quotable Einstein, published by Princeton University Press, nor – if the search function is reliable – in Einstein Archives Online.

Can anybody confirm whether this passage is actually due to Einstein (even indirectly, for instance being a composite of separate sentences, or some kind of digest/abridgement)? Or, if not, where does it actually come from?

tl;dr- It's unclear where this quote originally came from. The earliest references to it seem to be in Spanish from 2001, while the earliest English variants seem to appear in 2008.

English sources predominately attribute the quote to The World as I See It (1949), however the quote doesn't seem to actually be in that book. Earlier Spanish references attribute it to The Crisis, however no work by that name appears in any major listing of Einstein's publications.

It appears that Einstein wrote letters to a magazine called The Crisis. It's possible that this alleged quote may've been from such a letter. Since this is possible-but-unverified, it's difficult to either refute or confirm the authenticity of this quote given only the information provided below.

1. Claimed to be from The World as I See It

Checking Google, there certainly are a lot of references to this quote. Those that attribute it (examples: 1; 2) seem to claim that it's from The World as I See It (1949; on Google Books; on Amazon.com).

Searches on the Google Books page for various phrases in the quote didn't show any matches. The book does use the word "crisis" in a few places, but none of the references seem to even loosely match the quote.

2. First sightings of the quote

There's no merit without crisis.

The strange thing about all of these sources is that none of them is primarily English-speaking. This is unusual for the early internet, especially as a source for an alleged English quote allegedly from an English source.

However, Source (1) has Spanish variant linked on it: 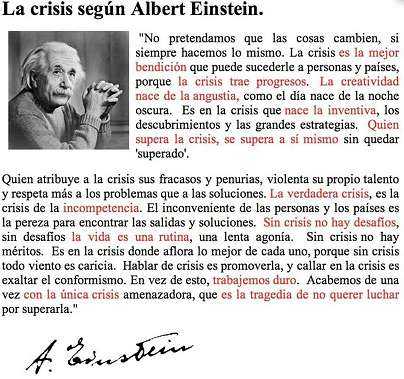 So, I've tried searching for an excerpt from this Spanish version:

, while Google also shows other sources hosting it from 2001. Google Translate translates this as:

Do not pretend that things change, if we always do the same. The crisis is the best blessing that can happen to people and countries, because the crisis brings progress.

Creativity is born of anguish as the day is born of the dark night. It is in the crisis that inventiveness, discoveries and great strategies are born. Who overcomes the crisis surpasses itself without being overcome.

Who attributes to the crisis their failures and hardships, violates their own talent and respects problems more than solutions. The real crisis is the crisis of incompetence.

To speak of crisis is to promote it, and to remain silent in the crisis is to exalt conformism. Instead we work hard. Let's end once and for all with the only threatening crisis, which is the tragedy of not wanting to fight to overcome it.

Since there's no English version on Google before late-2008, it seems likely that the English translation originated from these.

3. Claimed to be from Crisis or The Crisis

The Spanish sources usually claim that this is from an Einstein work called "Crisis" or "The Crisis", despite the later English sources attributing it to The World as I See It.

Unfortunately, there doesn't appear to be any major Einstein work called either "Crisis" or "The Crisis". Searching Einstein Archives Online yields several works with crisis in the title, but none appear to match up.

However, apparently there was a major magazine called The Crisis, which it seems that Einstein wrote to:

Statement in congratulation of the Crisis, ca. October 1931

Einstein's endorsement of the "Crisis"'s efforts and achievements, relayed upon the magazine's 21st year in print, and reflection on the "instinctively realized disadvantages" suffered by minorities and the important of "conscious educational enlightenment" among same; "The conscious effort of the American Negro in this direction deserves every recognition and assistance."

Einstein's correspondence with The Crisis appears to have been a basis for a book, "Einstein on Race and Racism" (2005; on Amazon.com). The earliest date I can find for this book is 2005, while online sources in Spanish seem to date back to at least 2001, so it's unlikely that this book could be the original source of this quote, if it even shows it.

However, it seems plausible that the alleged quote might be related to something that Einstein wrote to The Crisis. This would explain why it doesn't sound like Einstein's usual tone and why the earliest sources seem to call the essay "The Crisis".

Since this is a plausible source for the alleged quote, it's difficult to refute the possibility that it might be real. But, it remains unverified.