No, or, at least, there is no evidence that it does.

The first problem with this is the source - obviously a site like "purityispossible.com" is going to have a moral agenda, and is going to be decidedly anti-pornography. As such, we would certainly, while not dismissing the possibility, ask that they offer research to back up their claims.

The next problem is referring to porn, love of chocolate, use of marijuana, listening to Taylor Swift songs, having sex with golf groupies (Tiger Woods' claimed addiction) as "addiction." While there might be some similar mechanisms involved in things we have trouble controlling our impulses for, the use of "addiction" as a much broader umbrella of behaviors, as opposed to the traditional "physical" addiction (body develops a physical tolerance, leading to increased dosages to achieve effect, and also leading to physical dependency and withdrawal when the substance is not available..... so the subject actually needing the substance, not just wanting or preferring) causes people to incorrectly over-equate the very different processes at work. This sets the stage for false equivalence.

Furthermore, the claim that dopamine is an "addictive rewarding neurochemical" is not an accurate claim.

This article addresses the claims of dopamine behind all these different "behavior addictions," which is not accepted science, and what dopamine does and does not. The entire article is relevant to this discussion, BTW (bold emphasis mine) -

Dopamine serves many complex functions in the brain, and and only kindergarten brain science describes it as an addictive drug.

No, Dopamine is Not Addictive | Psychology Today

The scientists in the field do not agree with the claims, either, when responding to papers or editorials offered in journals -

... Hilton and Watts offer some interesting neuroscience perspectives on their conceptualization of pornography problems as an addictive disorder.... Hilton and Watts offered little, if any convincing evidence to support their perspectives.... Instead, excessive liberties and misleading interpretations of neuroscience research are used to assert that excessive pornography consumption causes brain damage..... Depending on how addiction is defined, this is either well supported.... or whole speculative as in the case of pornography consumption.

It appears that the claims are based on false equivalence and poor, misleading interpretations of the science.

The human brain is programmed to incentivize behaviors that contribute to survival. The mesolimbic dopaminergic system rewards eating and sexuality with powerful pleasure incentives. Cocaine, opioids, alcohol, and other drugs subvert, or hijack, these pleasure systems, and cause the brain to think a drug high is necessary to survive. [emphasis added] Evidence is now strong that natural rewards such as food and sex affect the reward systems in the same way drugs affect them, thus the current interest in ‘natural addiction.’ ...

Can Pornography Use Become An Actual Brain Addiction? (2011)

In a recent study by our group, we recruited healthy male participants and associated their self-reported hours spent with pornographic material with their fMRI response to sexual pictures as well as with their brain morphology (Kuhn & Gallinat, 2014). The more hours participants reported consuming pornography, the smaller the BOLD response in left putamen in response to sexual images. Moreover, we found that more hours spent watching pornography was associated with smaller gray matter volume in the striatum, more precisely in the right caudate reaching into the ventral putamen. [emphasis added] We speculate that the brain structural volume deficit may reflect the results of tolerance after desensitization to sexual stimuli.

Some recent research not highlighted in the accepted answer backs it up even more, quoting a popsci summary of if:

Also hypersexuality is more often treated off-label (because there are no FDA-approved drugs for it) with SSRIs, which increase serotonin, rather than with drugs acting directly on dopamine, although naltrexone (an antagonist of the opioid receptor, so at least having something to do with addiction) has been also been tried. But there's not much in the way of studies of that either, and an effort to include hypersexuality in DSM-5 failed.

Perhaps the main pharmacological indicator that dopamine is somehow implicated comes from medicated patients with Parkinson's disease; some develop hypersexuality (and quite a few other behavioral issues like excessive gambling) as a side-effect of being treated with L-dopa, a dopamine precursor that turns into actual dopamine in the brain. However, fairly recent (2012) research indicates that at the usual therapeutic doses L-dopa does nothing of the sort in healthy volunteers. Testing higher doses "will be difficult, though, since higher doses of all currently available drugs that selectively augment DA neurotransmission are limited by side effects such as nausea, vomiting, dizziness and drowsiness."

So (amusingly) yourbrainonporn turned out just the same for all, yourbrainanticipatingporn is different for some. Although this may sound reassuring, the wanting-difference part is however consistent with the incetive salience theory of addiction.

So the (addiction) question may come down to whether you think behavioral issues like gambling disorder are (or aren't) addiction. I note that the accepted answer implies that behavioral addictions aren't addictions, but this is not the prevailing opinion in the DSM-5, which recategorized gambling disorder from an impulse control disorder to an addiction. There's even an official blurb about this in their change summary

An important departure from past diagnostic manuals is that the substance-related disorders chapter has been expanded to include gambling disorder. This change reflects the increasing and consistent evidence that some behaviors, such as gambling, activate the brain reward system with effects similar to those of drugs of abuse and that gambling disorder symptoms resemble substance use disorders to a certain extent.

The reason why the other proposed behavioral addictions didn't get included was the lack of enough empirical evidence in their favor as such. (Internet gaming disorder was included in the "for future research" section with a passing mention that it might rise to the level of an addiction in some extreme cases.)

Anyway, here's a table with the Polish study participants' other group characteristics: 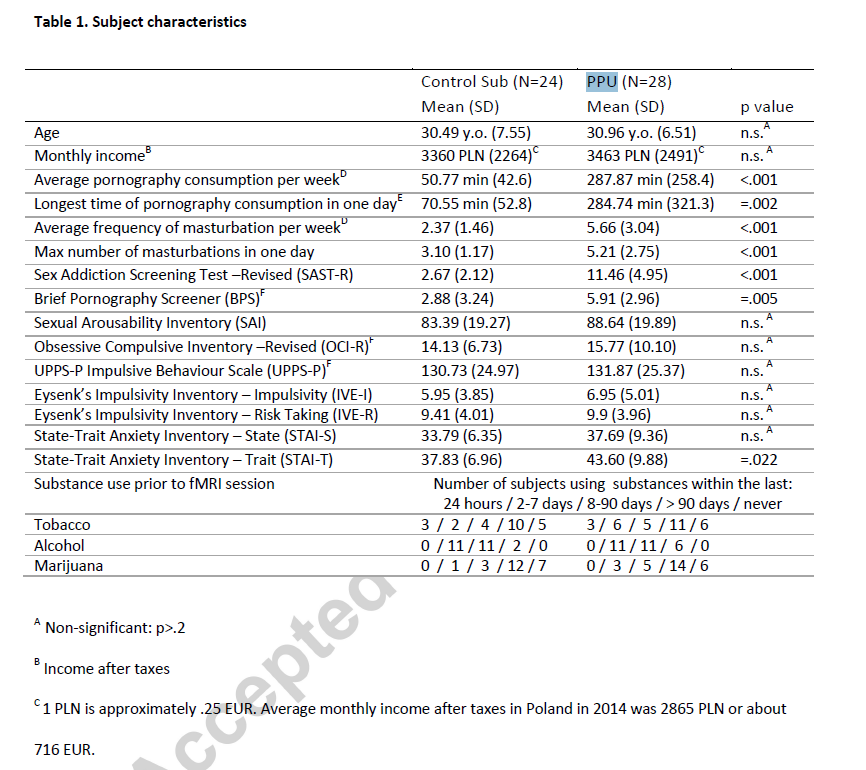 (I snipped some of the really long and boring methodological footnotes.)

Not the answer you're looking for? Browse other questions tagged addiction .

31
Does addictive behavior exist?
9
Does smoking under three cigarettes a day prevent addiction?