Is global persecution of Christians at historic peak?

From this article in the "Catholic News Agency":

Anti-Christian persecution is “worse than at any time in history”

How much are Christians really persecuted today, and is it really worse today than at any other time in history?

Catholic News Agency is reporting quotes from a document correctly, yet the evidence the document presents does not support these conclusion and it's otherwise unconvincing.

The news piece cites this report and uses quotation marks for the claim.

In fact the report claims

the persecution of Christians is today worse than at any time in history. Not only are Christians more persecuted than any other faith group, but ever-increasing numbers are experiencing the very worst forms of persecution.

The report comes from a very biased source, a charity whose mission is

supporting the Catholic faithful and other Christians where they are persecuted, oppressed or in pastoral need.

In fact, looking at the report sources, their data covers 25 years.

This is a biased source as its world watch list is first of all simply a country rank, which is great for comparing countries but useless for comparing numbers of people actually persecuted and historical trends thereof. Secondly, I disagree with their definition of "high persecution", which indicates countries where Christians are actually free to worship and are not persecuted (e.g. Colombia, a Christian country). They are an "international ministry serving persecuted Christians and churches worldwide", and not a neutral observer.

Whereas, Pew Research, more reputable and generally more neutral, gives a wider context that shows that Christians are persecuted in similar numbers to Muslims, among other sobering facts, and are not "more persecuted than any other faith group".

In fact, in terms of what percentage of believers live in countries where there is discrimination, Christians are among the least affected: 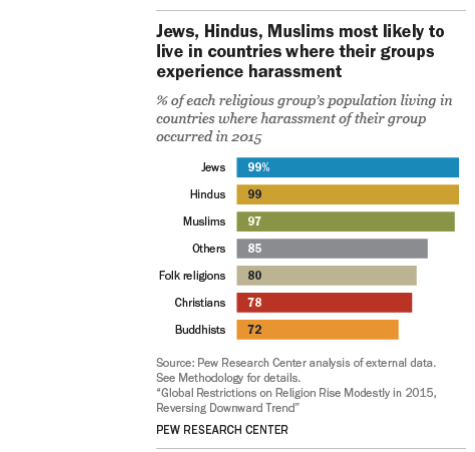 The third source cited in the report is a non-reputable propaganda site in my opinion and not worth citing here.

Christians are being killed on account of their religion at a rate of about 90,000 per year.

However, this is not a maximum.

As explained in Wikipedia's persecution of Christians article:

Between 1915 and 1921 the Ottoman Empire conducted a series of massacres against ancient indigenous Christian populations of what is today western and eastern Turkey, northern Iraq, north eastern Syria, north western Iran and Lebanon, known as the Armenian Genocide,[67][68] Assyrian Genocide,[69]Greek Genocide.[70] and Great Famine of Mount Lebanon.[71][72] which accounted for the deaths of up to 3,500,000 Armenian, Assyrian, Greek and Maronite Christians, and the deportation and destitution of many more.

The Young Turks government of the collapsing Ottoman Empire in 1915 persecuted Eastern Christian populations in Anatolia, Persia, Northern Mesopotamia and The Levant. The onslaught by the Ottoman army, which included Kurdish, Arab and Circassian irregulars resulted in an estimated 3.4 million deaths, divided between roughly 1.5 million Armenian Christians,[112][113][114] 0.75 million Assyrian Christians, 0.90 million Greek Orthodox Christians and 0.25 million Maronite Christians (see Great Famine of Mount Lebanon);[115] groups of Georgian Christians were also killed. The massive ethnoreligious cleansing expelled from the empire or killed the Armenians and the Bulgarians who had not converted to Islam. The Genocide led to the devastation of ancient indigenous Christian races who had existed in the region for thousands of years.[116][117][118][119]

So in the 1915-1921 time period Christians were being killed on account of their religion at the average rate of about 500,000 a year, which is much higher than the rate now.

10
Are 4 out of 5 people persecuted for their religion, Christians?

17
Were Christians ever publicly executed for their faith in Ancient Rome?
24
Have 50 million Eastern Orthodox Christians been killed in the 20th century?
13
Did St. Patrick rid Ireland of druids and other pagans?
23
Was Messina destroyed by earthquake three days after local newspaper dared God to do so?
49
Did Christians kill thirty to fifty times as many people in political violence as Muslims in the 20th century?
36
Did fewer Jews die of the Black Plague because of ritual washing?
8
Did a Chinese ethics textbook say Jesus stoned a woman to death?
2
Have 25% of all Christian Ex-Muslim converts received dreams or visions as a major factor in their conversion?
7
Are Luther and Calvin responsible for executing more humans than the Catholic Inquisition?