Did a woman go blind after playing a mobile game?

The article Chinese woman blinded in one eye after playing game likened to electronic heroin stats:

The 21-year-old woman suddenly lost sight in her right eye after playing the game for the whole day over the weekend ... in Dongguan, Guangdong province, according to the South China Morning Post. She was diagnosed as having suffered retinal artery occlusion caused by severe eye strain.

According to a 看看新闻 news report, yes, an (at the time) 21-year-old Chinese woman regularly binge-played the mobile game 王者荣耀 and lost vision in her right eye (via retinal vein occlusion or "eye stroke"), which the doctor thought will likely be permanent. Both the woman and her doctor seemed convinced excess mobile gaming was likely the cause of her monocular blindness (along with failing to immediately seek treatment).

Commenting on this case, we have:

There’s a possibility that the woman’s marathon of video game playing caused a vasospasm of the retinal artery.
Dr. Daliah, Woman Goes Blind in One Eye After Playing Game on Phone for Hours, 2017.

Nevertheless, there are likely many people overusing electronic devices, and "12,000 people suffer an eye stroke every year" presumably in the USA (according to the Icahn School of Medicine at Mount Sinai), so these populations will surely overlap without there necessarily being a causal relationship. Moreover:

There is no clinical evidence that prolonged screen use causes permanent vision loss.
Dr. Arvind Saini, quoted in Can staring at a screen make me go blind?, Sharp, 2020.

However, there are documented cases of temporary blindness:

Two patients presented with loss of vision after viewing a smartphone screen in bed in the dark. The cause appeared to be differential bleaching of photopigment, with one eye becoming light-adapted while the other eye (blocked by a pillow) became dark-adapted.
Transient Smartphone “Blindness”, New England Journal of Medicine, 2016. (See also Transient Smartphone Blindness, EyeWiki.) 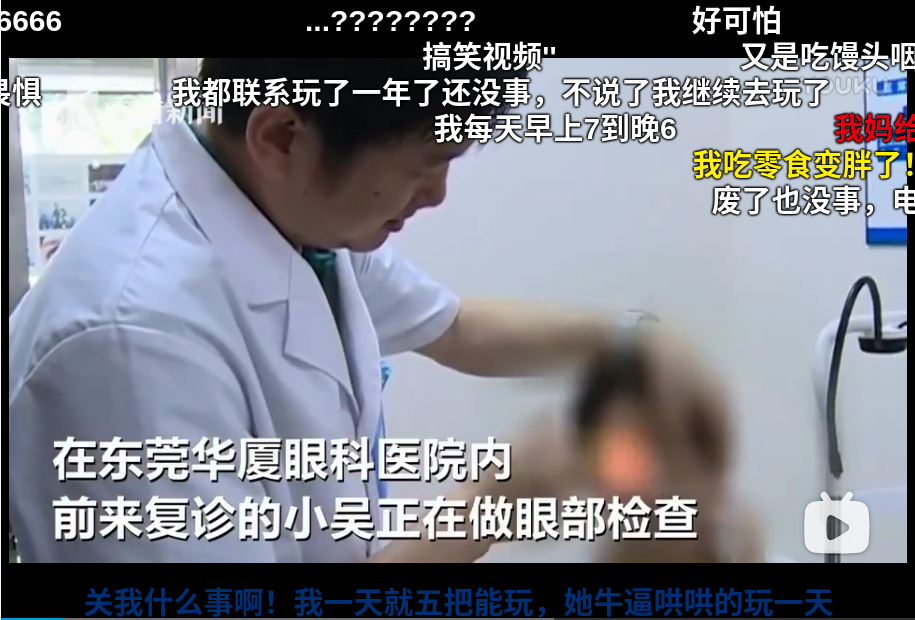 The woman has light flashed in and out of her right eye, after which she says she didn't notice anything. 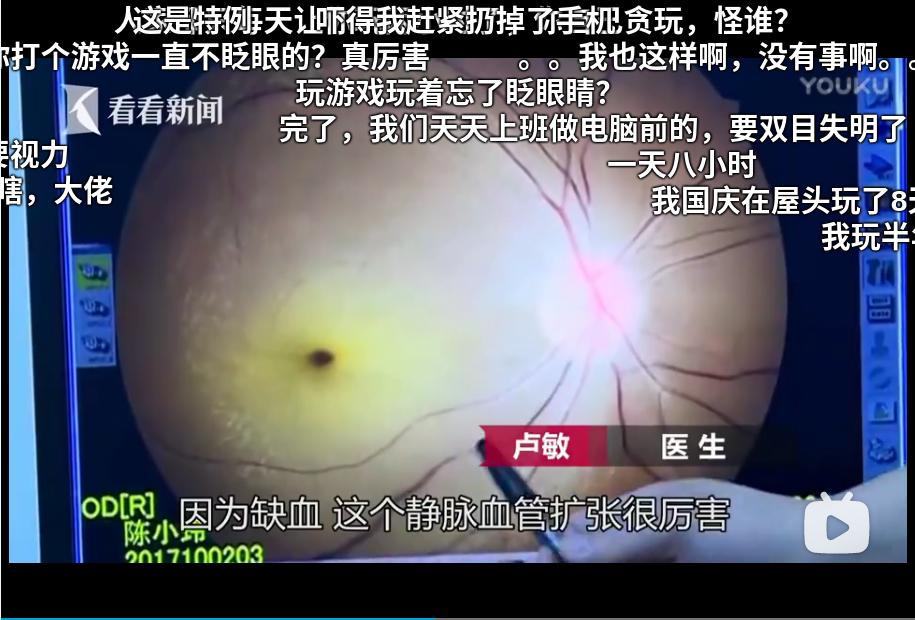 The woman says she was told her eye's vein is blocked. Then they turn to a doctor (named 卢敏) who looks at this image, and he says there is a lack of blood, and he points to her (retinal) vain and says its expanded and thick. The reporter asks if the blood cannot pass, and the doctor agrees. He says as is typical, there is a 水肿 = "edema".

The doctor seems to agree that the woman didn't have any other problems, but played the game too much because of a game addiction. She says she played the game for 7-8 hours at a time. The report says she binge-played (疯玩一天) the mobile game 王者荣耀 on the Chinese National Day. When she went blind in one eye, she waited for her parents to come home before going to the hospital.

The doctor says it's likely permanent, although they'll try various treatments like acupuncture, hormones, and other medicines.

Searching the Chinese news, I found a number of reported instances along the lines of "someone uses electronic devices a lot, goes blind temporarily":

Not the answer you're looking for? Browse other questions tagged healthcare mobile-phones china videogames .

16
Did GamePro make up the story of the arcade game Polybius?
8
Did an elderly Chinese woman grow horns?
15
Did a man jump to his death after too much shopping?
8
Is Tetris by Electronic Arts the best selling video game on mobile?
28
Did millions sign up for association health plans after President Trump's executive order?
34
Did The Lancet publish an account of a woman who did not age?
2
Did Chinese users spend 277.4 trillion yuan ($41.51 trillion) on mobile payments in 2018?
8
Did a Chinese ethics textbook say Jesus stoned a woman to death?