This picture states that Trump donated his own money to Puerto Rico and "sent" several types of aid to them actively. 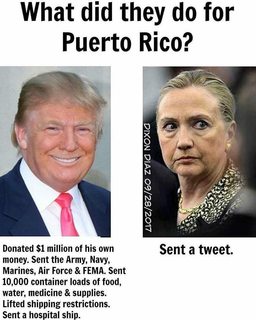 The picture is a "top" thread on his Reddit page with 6000 likes https://www.reddit.com/r/The_Donald/comments/737b57/puerto_rico_comparison/

The relevant claim here seems to be the donation. Regarding the other issues:

Claim: Trump donated 1 million of his own money for Puerto Rico

There is no source for this claim, not even a source claiming that Trump claimed that he donated that money to Puerto Rico.

Instead, the claim seems to be a combination of two issues:

It seems that the 1 million donation did arrive at various charities (although there is at least some unclarity who donated it). As this donation was made before Puerto Rico was hit, it doesn't fit the claim.

There are plans by the Trump inaugural committee to donate $3 million. These donations are not specifically for Puerto Rico, but at least the timing fits. But this is of course not Trumps personal money, but instead donations he received.

Not the answer you're looking for? Browse other questions tagged united-states donald-trump hillary-clinton .

59
Did Donald Trump call Alicia Machado “Miss Piggy” and “Miss Housekeeping”?
4
Did Trump fight against racial segregation at his golf resort?
26
Did Trump call Belgium a village in Europe?
15
Did Obama's administration bug Trump Tower?
33
Were there depictions of Donald Trump holding Hillary Clinton's severed head?
12
Does the Jones Act double import prices in Puerto Rico?
11
Did Trump predict Gillespie would lose?
39
Did Hillary Clinton pay Russian officials 30 million dollars, through her campaign to get dirt on Trump?
6
Is the US government seizing PPE supplies to resell them with a markup?