Did NFL players used to remain in the locker room during the pre-game national anthem, prior to sponsorship by the Department of Defense? 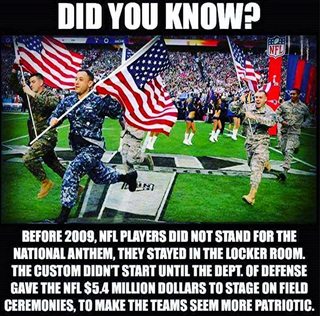 Before 2009, NFL Players did not stand for the National Anthem, they stayed in the locker room. The custom didn't start until the Dept. of Defense gave the NFL $5.4 Million Dollars to stage on field ceremonies to make the teams seem more patriotic.

According to the 1987 book American Football:

Every football game is preceded by a playing of the American National anthem. Rivalries are temporarily forgotten as fans and players stand to pay tribute to their country.

The concern of league officials is exemplified in the efforts of Pete Rozelle, commissioner of the National Football League, to have all players show proper respect for the national anthem (the athletes are told how to stand, how to hold their helmets, etc.)

Meggyesy feels that his first real political commitment came in 1963, his first year in pro football ... The Cardinal management tried to dissuade Meggyesy from his radical involvement, but to no avail. In fact, he went on to make his house a sort of meeting place for the St. Louis radical movement, to circulate petitions among his teammates ... to refuse to stand at attention with the rest of the St. Louis team when the national anthem was played.

For more information, see Meggyesy's 1970 book Out of Their League starting at the bottom of page 245, where he explains that coach Charley Winner (who had been held as a prisoner of war by the Nazis) lectured the team on exactly how to stand at attention during the national anthem. Then he writes:

I'd thought a lot about this and decided that saluting the flag was ridiculous. Every time I even looked at it, I saw only a symbol of repression, so I decided to protest. My original idea was to pull a Tommy Smith by raising my right fist in the air and bowing my head. ... When the National Anthem started I stepped out of line and began kicking the dirt and holding my helmet down in front of me with my two hands. My head was bowed and I was spitting on the ground and moving from side to side scuffing the ground with my shoes.

So not only is standing for the national anthem at profession football games a long tradition, the idea of refusing to stand at attention as a form of protest is as old as the 1960s.

Generally speaking, the tradition that football players (not necessarily professional) should remove their helmets and stand at attention during the National Anthem, facing the flag or facing the music if there is no flag, is at least as old as the 1950s, as explained in the Michigan High School Athletic Bulletin:

Participants in football uniforms should remove their helmets and stand at attention with the helmet held in the hand at the side.

Not true, at least not as a rule ("they always were in the locker room during the anthem").

There are plenty of pre-2009 videos available showing NFL players attending the anthem.

Whether or not they always were on the field, that's harder to establish, as there are also videos around that don't show players (because they weren't on the field, or because the cameraman didn't deem it important to show them).

Yes and no, to be honest. There was no requirement that players be on the field for the anthem for all games.

However, there was no rule or policy that they stay in the looker room, either. Basically, where the players were depended more on the logistics of the spectacle of the game, before 2009.

Prime time games, played at times other than the standard game times (Sundays, 1 PM ET and 4 PM ET) would have the field cleared so the network could set up the pre-game logistics without having to work around players milling about the field. Regular-timed games were on a tighter schedule, so the players were already on the field and ready to go right after the anthem. Being on that tighter schedule, the anthem was generally not broadcast before the regular-time games.

Spokespeople for the NFL have said on several occasions -

Players are strongly encouraged, but not required, to stand.

We believe our players have a right to express themselves

A short history of the national anthem, protests and the NFL | PolitiFact

Snopes FACT CHECK: Why Are NFL Players on the Sidelines for the National Anthem

So, what is clear is that there is no requirement, now, for players to stand and recognize the anthem. Where the players are is more a matter of where they need to be in order to participate in games from the start.

Not the answer you're looking for? Browse other questions tagged united-states football .

16
Did the U.S. government have prior knowledge of 9/11?
13
Did US President Bill Clinton pay down the national debt by $223 billion in 2000?
31
How often are guns used by private citizens in self defense per year in the United States?
67
Did the National Rifle Association (NRA) block research into statistics related to gun control?
11
Did a broadcast of the US National Anthem in the 60's use subliminal messaging?
23
Did Ed Trice force the rescoring of a national standardized math test?
3
Did Apollo Moon landing program cost less than lipstick used by American women during same 11 years?
60
Did the US Department of Defense produce and release the poster “tweets sink fleets”?
12
Did the Houston Police Department intentionally target the house on Harding Street?