Did a Jewish boxer survive the holocaust by fighting fellow prisoners? 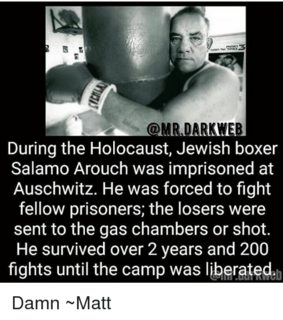 During the Holocaust, Jewish boxer Salamo Arouch was imprisoned at Auschwitz. He was forced to fight fellow prisoners; the losers were sent to the gas chambers or shot. He survived over 2 years and 200 fights until the camp was liberated.

Is this story accurate?

The graphic is mostly true.

Arouch arrived at Auschwitz in the summer of 1943 and fought about 200 times (usually 3-round fights) between then and 17 January 1945 when the camp was evacuated.

“The loser would be badly weakened,” he says. “And the Nazis shot the weak.”

The fights were not 100% forced on Arouch's part, as Arouch is quoted in a 18 December 1989 New York Times article:

"...commander - I remember his name as Hans ... I tell the commander's interpreter - I am arrogant now - 'If you have a good boxer, bring him to me and I can show my stuff.' "

upon which they brought him a prisoner from Czechoslovakia to fight.

The Nazis used a combination of rewards and threat of death to force the prisoners to fight.

Additionally, there is some dispute whether or not the boxer was in fact Jacques Razon rather than Arouch. See footnote 33 of page 251 in Greece--a Jewish History

32
Were 1200 black soldiers massacred at Camp Van Dorn in 1943?
33
Did Hitler survive until 1962?
37
Are Elie Wiesel and Lazar Wiesel the same person?
34
Has the Holocaust been exaggerated?
12
Did 5 million non-Jews die in the Holocaust?
36
Did the world Jewish population increase between 1933 and 1948?
10
Is there any evidence of individual Jews participating in the Holocaust?
67
Was the Holocaust legal?