Did 13 men kill themselves after being rejected by Princess Qajar?

This has been doing the rounds on social media sites, this image with this caption 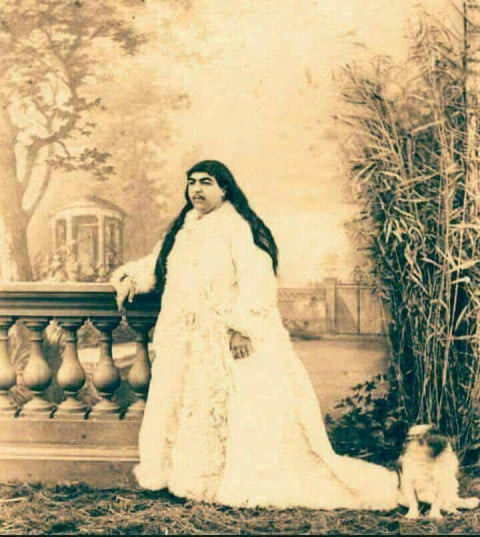 Princess Qajar. A symbol of beauty in Persia. 13 young men killed themselves because she rejected them.

There does not appear to be any credible evidence to support this claim.

Like you all, I saw the meme and was frustrated by what was obviously an attempt to make it go viral, rather than perpetuate actual history. So I went in search of the actual history, thanks in no small part to @DenisStallings' reference to the book "Liminalities of Gender and Sexuality in Nineteenth-Century Iran." It provided me with an excellent start to finding several excellent sources, and I wrote about what I found in a blog post called "'Princess Qajar' and the Problem with Junk History Memes."

The real history is quite interesting, but in case you just want a straight answer to the question, here is a relevant excerpt:

Naturally, there is no source given to support this claim, which appears to be pulled from thin air. Were it true, it would seem like worthy material to include in even the shortest legitimate biographical information about ‘Esmat, but it doesn’t appear anywhere. There are, however, at least two good reasons to disbelieve this claim. First, ‘Esmat was probably married when she was around nine or ten years old. Second, the marriage was very likely arranged while she was living among the women of her father’s harem. It seems highly unlikely that she had the opportunity to meet any man not her relative, never mind beguile and reject thirteen suicidal lovers. Later, as a married woman in patriarchal Persia, it’s equally unlikely that she was being courted by amorous suitors.

8
What was Marilyn Monroe's dress size?
31
Can you detect a hidden camera in a trial room/changing room with your phone?
30
Is the heart symbol based on female anatomy?
5
Has it only been about two hundred years since women gained access to literacy?
13
Do these photos from the Civil Rights Era show Bernie Sanders?
11
Did William T. Thompson design a flag with explicit white supremacist symbolism, which was adopted by the US Confederacy?
4
Were nearly all founders of large companies existing in mid 20th century uneducated "rude mechanicals"?
69
Is this a satellite image of Australian bushfires?
10
Was it ever common in the USA for women to use their husbands' Social Security Numbers as their own?