Did the Christian Democratic Union of Germany (CDU) post this advert in Turkish?

On 14 September 2017, Hamed Abdel-Samad and Erika Steinbach posted on Facebook, referencing the following image, which is purportedly a CDU advert: 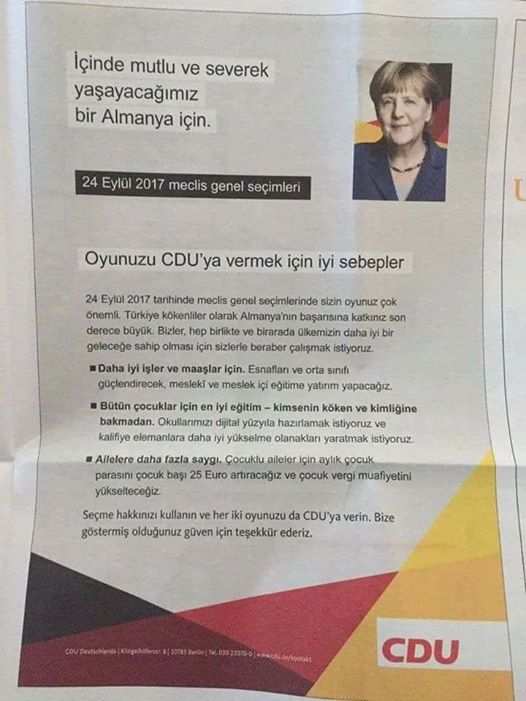 The three main points roughly translate (according to Google Translate) as:

The third point is about child support ("Kindergeld" in German). This is a known CDU electoral promise (German source.)

Does the above image depict a real advert run by the CDU? If so, where did the ad run?

The German far-right website PI News claims that this ad was in the free regional newspaper Werbezeitung Öztürk in Bielefeld on the 1st of September.

An online edition of the newspaper shows the ad on page 5.

Raising the Kindergeld by 25 Euros is indeed a CDU election promise, being advertised to everyone, not just the Turkish-speaking community.)

Advertising with common election promises in a Turkish newspaper in Turkish doesn't seem unreasonable, nor unusual. There is a relatively large Turkish community in Germany, so targeting them makes sense. The SPD for example already used Turkish ads in 2011 in Berlin. PI News reported in 2013 that even a far-right party advertised in Turkish (although the ads were later retracted).

45
Did Obama say the USA is "no longer a Christian Nation"?
1
Did Pablo Iglesias post this sentence on twitter?
6
Did political analyst, Larry Sabato ever say "The higher the education level, the more likely they are to vote Democratic."?
9
Did Nazi Germany use the German census in its targeting of minorities
10
Did Germany and France offer help to Italy in the Covid-19 crisis?
18
Did the New York Post publish authentic email correspondence of Hunter Biden?