Is this comparison of Carol Irving and David Laws MP accurate?

I saw this on Facebook today. It has been shared over 3,600 times. 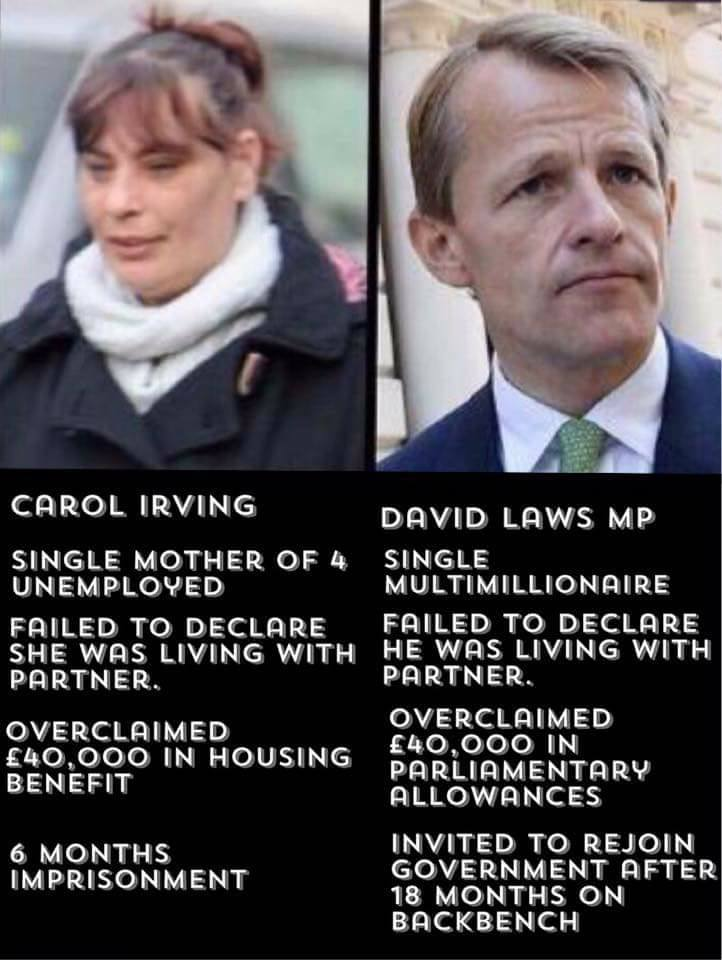 It is a photo of the two individuals, Ms. Irving on the left and Mr. Laws MP on the right. Below Ms. Irving's photo it has the following points:

Below Mr. Law's photo it has the following points:

How accurate is this comparison? Is he really a multimillionaire? Did they each defraud the government of the same amount; and was it £40,000? Was the 6-month sentence just for the benefit fraud, or were there other factors? If it was just for the fraud, is that a standard sentence for this crime?

As I'm sure you realize the comparison is politically motivated. For those claiming benefits payments, particularly housing, it's material whether you are co-habiting with a partner. This principle is controversial and regularly criticized by the Left as an unwarranted intrusion by the State.

David Laws entered politics after a successful business career in the City of London. He was a senior managing director at BZW so it's safe to assume he was making 7-figures a year and is a multi-millionaire. He was also secretly gay and, to disguise this, pretended to be renting accommodation in London from his partner when in fact they were cohabiting. This rent was then claimed back as a parliamentary expense. By not disclosing the relationship between them he broke the rules on expenses and had to resign as a minister. Daily Telegraph 28 May 2010

In his defence it was accepted by the Parliamentary standards body that his actions were motivated by wanting to hide his sexuality rather than financial gain. It was also pointed out that if he'd nominated his constituency home as a second home (which was absolutely commonplace for MPs of all parties) he could have claimed a lot more money without breaking the rules in the slightest. Official Parliamentary Report

How accurate is the comparison? Not very. Carol Irving systematically and deliberately defrauded the taxpayer by failing to disclose her personal circumstances. David Laws inadvertently broke the rules on parliamentary expenses as a side-effect of trying to conceal his sexuality. Just 'working the system' in a completely legal way would have netted him far more money.

"Single mum Carol Irving was sent to jail for six months in June for benefit fraud after failing to tell the authorities she had a partner living with her. ... The mum of four, from Plymouth, told the city’s crown court she would not have been able to feed her family if she had declared her true circumstances." Mirror report

Not the answer you're looking for? Browse other questions tagged united-kingdom .

8
Are media reports about squatters' rights accurate?
17
Was David Cameron linked to "Hang Nelson Mandela" posters in the 1980s?
29
Did this building cause carpet to burn and cars to melt?
41
Is Queen Elizabeth queuing for a sandwich in this photo?
8
Did Prime Minister David Cameron commit necrophilia with a pig's head?
2
Did Tony Benn say this about "the establishment"?
2
Are the claims in this infographic about the UK Prime Minister accurate?
71
Is this photo of Jeremy Corbyn and caption accurate?
13
Does the UK provide 50% of EU's waters? And does this imply anything about fishing rights?