Did the Polish birth rate soar because of a curfew imposed in the 1980s?

Alternatively, jokes its president, Cezary Kazmierczak, it should cut off power two nights a week to keep Poles at home in the evening. When a curfew was imposed in the 1980s, the birth rate soared.

Is the above true? And also, what was the estimated boost to the birth rate?

(I imagine that if there is some truth to the matter, economists, sociologists, demographers, and other academics will have studied the matter and attempted to estimate the effect of the curfew on the birth rate.)

It is true that birth rates were higher in 1983 in Poland than in the immediately preceding years or the immediately following years, which is consistent with the hypothesis in the article

But Russia, Belarus and Ukraine saw a similar pattern, so there might also be other regional explanations, whether political, cultural or meteorological. The effect seems to have been relatively small and might not justify hyperbolic language like "soared". The decline in birth rates up to 2000 was much more dramatic

The following chart comes from Google using World Bank data showing birth rates in some selected countries: Poland is the blue line at the top with a peak of 19.8 in 1983 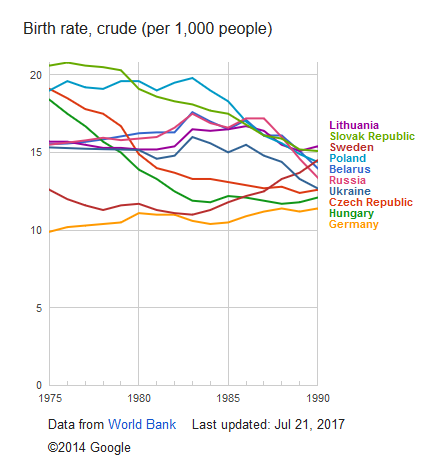 Not the answer you're looking for? Browse other questions tagged fertility poland .

16
Did the No. 303 Polish Fighter Squadron score the most kills in the Battle of Britain?
8
Has Jesus been declared the king of Poland?
7
Did 150,000 people march against Muslim Immigration in Poland?
8
Did the future Prime Minister of Poland help the future president of USA to pay his tuition?
8
Did Polish government institutions collaborate with Nazis?
2
Was the Polish army the fifth largest in 1939?