Has the Trump administration revoked these listed LGBT protections? 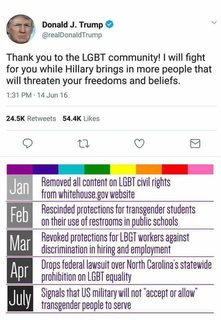 It quotes a tweet by Donald Trump from early 2016, followed by claims that the Trump administration has performed these actions:

Thank you to the LGBT community! I will fight for you while Hillary brings in more people that will threaten your freedoms and beliefs.

Jan: Removed all content on LGBT civil rights from whitehouse.gov website
Feb: Rescinded protections for transgender students on their use of restrooms in public schools
Mar: Revoked protections for LGBT workers against discrimination in hiring employment
Apr: drops federal lawsuit over North Carolina's statewide prohibition on LGBT equality
July: Signals the US military will not "accept or allow" transgender people to serve

Did the Trump administration perform all of the claimed actions, on the months cited?

This is rather misleading as every new administration removes and archives the content of whitehouse.gov. You can see the old site at obamawhitehouse.archives.gov.

Redirects have been added for LGBT content, e.g. whitehouse.gov/the-press-office/2016/06/29/fact-sheet-promoting-and-protecting-human-rights-lgbt-persons. It is arguable whether this is still counted as being "on" whitehouse.gov.

The Trump administration has not added any LGBT-related content on the new whitehouse.gov. In fact, the entire website is significantly lighter than it used to be. Compare current and previous issue pages. Perhaps this is due to time in office, preference, or other reasons.

Feb, rescinded protections for transgender students on their use of restrooms in public schools: true

When a school [that receives Federal funds] provides sex-segregated activities and facilities, transgender students must be allowed to participate in such activities and access such facilities consistent with their gender identity.

This court decision over transgender bathroom use cites that document in its decision.

Trump's Education department revoked the letter, and therefore any legal basis that relied on it.

EDIT: Credit to @DeNovosupportsGoFundMonica for pointing out my sources were incorrect, which stated that Trump (or any other president) could say opinions but could not actually affect legalities. Apparently these source were false.

For context, I leave the erroneous legal opinions from Lambda Legal and the ACLU below:

Trump's actions do not change the law itself -- transgender students remain protected by Title IX of the Education Amendments of 1972 -- but abandoning the guidance intentionally creates confusion about what federal law requires.

In fact, Trump's actions evidently did affect the interpretation of laws.

Two caveats: (1) it only ever applied to federal contracts, and (2) it was a purely administrative change, not a legal one.

These are still laws, but compliance will no longer have to be demonstrated for every contract.

And none of this matters for employers who are not federal contractors.

And even more glaring problem with the claim is that North Carolina repealed the law. While technically the Justice Department did perform the legal formality of withdrawing their suit, they did this only because the defendant acquiesced. By any reasonable definition, the Justice Department "won" their case.

When North Carolina repealed the law, they did replace it with another prohibiting local governments from legislating in this area. Though the practical consequences of the new law likewise has the ire of transgender groups, it is different. And the state law leaves no grounds for the Justice Department to create a new lawsuit on constitutional violations.

July, signals the US military will not "accept or allow" transgender people to serve: true

the United States Government will not accept or allow...Transgender individuals to serve in any capacity in the U.S. Military.

For context, at the time of this answer, openly transgendered recruits have never been permitted in the U.S. military. Obama announced the restriction would be lifted, but not until a full year after he left office, in 2018.

EDIT: Note that the claim did not say that President Trump ordered or carried out the ban's continuation; the claim conservately stated that he "signaled" it, and he certainly did that.

During Barack Obama’s presidency, if you typed whitehouse.gov/lgbt into your browser, you reached a page highlighting the administration’s victories and policy changes regarding LGBT rights. It outlined historic court victories and even featured campaigns like the It Gets Better Project to help LGBT youth.

Today, however -- just hours after President Donald J. Trump took the oath of office as the United States’ 45th president -- if you type in whitehouse.gov/lgbt, you are redirected to a new “transitionsplash” page.

Feb: Rescinded protections for transgender students on their use of restrooms in public schools

The Trump administration on Wednesday revoked federal guidelines specifying that transgender students have the right to use public school restrooms that match their gender identity, taking a stand on a contentious issue that has become the central battle over LGBT rights.

In response to Obama administration guidance

In response to Trump administration withdrawal

True - his action was limited to discrimination limits relating to federal contractors.

Trump signed an order on Monday revoking protections signed into law by President Obama in 2014. Obama signed an executive order banning LGBT discrimination among federal contractors; he concurrently signed an order requiring contracted businesses prove they're complying with federal laws and executive orders. President Trump rescinded the latter order, making it much more difficult to know whether a business has committed to ending LGBT bias in hiring, firing, and promotions.

True- the reason given for dropping the federal suit is that North Carolina repealed one bill and replaced it with another. The new bill was watered down but still attracted intense criticism by LGBT groups who believe the federal suit should have continued against the replacement bill.

Officials said that they were abandoning the lawsuit because North Carolina lawmakers last month enacted a law repealing the bathroom bill and replacing it with another measure. The new law, however, has prompted intense criticism from the LGBT groups who long opposed the first bill and are vowing to keep fighting the new measure in court despite the Justice Department’s decision to bow out.

July: Signals the US military will not "accept or allow" transgender people to serve

Donald Trump said on Wednesday he would not allow transgender individuals to serve in the US military in any capacity, reversing a policy put in place by Barack Obama a year ago.

The US president tweeted: “After consultation with my generals and military experts, please be advised that the United States government will not accept or allow … transgender individuals to serve in any capacity in the US military.”

Not the answer you're looking for? Browse other questions tagged united-states donald-trump equality lgbt .