Do Jews joining the Chicago SlutWalk march have to be anti-Zionist?

Mark Joseph Stern wrote in a Slate article, This Is a Safe Space. No Jews Allowed:

Why are some American progressives embracing overt anti-Semitism?

Are you a Jew in Chicago who’d like to march for LGBTQ rights and gender equality? You’ll have to follow a few rules, helpfully laid out in recent weeks by the Chicago Dyke March and the Chicago SlutWalk.

Second, you must express solidarity with Palestine. Marching in a parade with a pro-Palestinian stance is not sufficient, nor is advocating for a Palestinian state. As an openly Jewish person, you’ll need to satisfy more heightened scrutiny; other marchers may repeatedly demand that you disavow Israel and swear allegiance to the Palestinian cause. You must comply with these demands or else you will be expelled.

There's a tweet from Chicago SlutWalk which I think contradicts that. It states:

wrong. They were kicked out after a discussion where they made their Zionist beliefs known and refused to back down.

Is that true that Jews who would like to join the Chicago SlutWalk march for gender equality have to follow such a rule?

An official statement from SlutWalk Chicago on Twitter is: 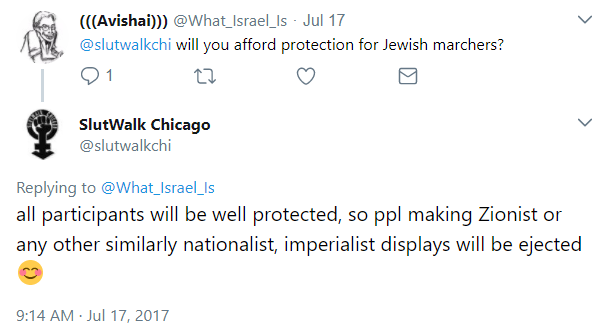 [Question] will you afford protection to Jewish marchers

[SlutWalkChicago Answer] all participants will be well protected, so ppl making Zionist or any other similarly nationalist, imperialist displays will be ejected

this article explains that:

Chicago Dyke March ejected three pro-LGBT, pro-Israel marchers who were reportedly waving flags with the Star of David superimposed over the LGBT rainbow

"We still stand behind DykeMarchChi’s decision to remove the Zionist contingent from their event, & we won’t allow Zionist displays at ours"

There is video and more information concerning the original ejection at Chicago woman kicked out of march over Jewish pride flag:

They call it the Chicago Dyke March. Organizers say they call it that because they are trying to reclaim a term that has historically been used against people in the LGBTQ community.

The march is separate from the Chicago Pride Parade and is billed as a more inclusive event focused on social justice.

Laurie Grauer says she received her Jewish pride flag from Congregation Or Chadash, where she is a member.

"It was Chicago's first, and for a while only, LGBT congregation," she said.

Grauer says she and two other friends were told they were unwelcome at the 1,500-person march because their flags were offensive and threatening. A small part of the encounter after the march was caught on cell phone video.

"For me, carrying this flag is a celebration of these identities I hold very dear -- being Jewish and being gay,” she said.

It doesn't seem so (at least not anymore).

The ejection of Jews from the Dyke March for carrying a flag with the Star of David happened and has widely been called antisemitic (see here or here) and was supported by SlutWalk (see the tweets at the end of my answer). Afterwards, the Dyke March stood by those actions, and used anti-Jewish slurs created and used by Nazis while defending their actions (which SlutWalk did not support).

It seems that at least the SlutWalk had a change of mind regarding the banning of Jewish or "Zionist" symbols:

“We are not banning any symbols or any kind of ethnic or heritage flags,” Red said, explaining SlutWalk Chicago's new policy. “Those are welcome, everyone is welcome to express themselves as they see fit at SlutWalk. [...]

Red said on Friday that [the tweets in question] shouldn't have been made. “That came out of a very rash tweet that we sent out, that we are banning Zionist symbols that we should not have sent out, as a result of a particular social media team responding very urgently, without talking to the collective,” they said. [...]

According to Red, SlutWalk has since reached out to the Jewish and Muslim communities in Chicago to show that the event is inclusive and offers a safe space to all participants. [...]

According to its new policy, SlutWalk Chicago will not only allow participants to display the Star of David, but also won't ban other symbols widely seen as Zionist.

The entire interview in which this new policy was expressed is available on Gretchen Rachel Hammond's blog.

9
Did anti-discrimination efforts lead to the sub-prime mortgage bubble?
11
Did the Nixon administration use anti-drug law against anti-war movement?
2
Was the investigation of the DNC Email Hack performed by anti-Russian activists?
11
Did NAMBLA march in Gay Pride parades in the 70s and 80s?
5
Did the Israeli paper Ma'ariv run an article titled "The Jews Who Run Clinton's Court" in 1994?
9
Does the Caravan have Middle Easterners?
27
Have over 1 million people in the US been tested for the coronavirus as of March 30th?
22
Did Senator Hillary Clinton introduce only a single bill (an anti-flag burning bill) into the Senate?