Will Australian unions be getting $AU22m per year from superannuation funds?

This article from The Fair Go (a group sponsored by the Liberal Party of Australia) claims that Australian unions will get $AU22 million per year from superannuation.

It does not clearly explain how or really show they are.

No, the article does NOT say that unions "will" be getting $22M as a fact. Quoting from the main article blurb (whatever you call those large-font quotes in middle of the article that are most important points):

So, what the article claims is that the growth projection, if things remain unchanged, is $22M. Whether their projection analysis is accurate is a separate question (I wasn't able to find any independent analysis, and doing the analysis myself is off topic for Skeptics - you may want to ask on Finance or Economics or Statistics SE - it looks legit enough approximation to me to at least be in the right ballpark).

As far as the claim you didn't ask about (whether the money was paid) the original source of the claim is "Board fees for unionists cost industry super funds $5.4m" article by Elizabeth Colman in The Australian newspaper, though due to paywall, I read the article's re-print here:

Unions have reaped $5.4 million from industry super funds over the past two years by giving high-ranking officials spots on governance boards, in a practice slammed as “undesirable” by one of the ­nation’s leading financial experts.

The ACTU, Construction Forestry Mining and Energy Union, Australian Workers Union and the Maritime Union of Australia were among those paid by Australia’s biggest industry super funds through non-executive directorships for prominent officials, fund records revealed.

Construction industry fund CBUS delivered the biggest payday of $927,940 to the CFMEU, the AMWU manufacturing workers union, the CEPU communications union and the ACTU in 2014-15.

Coalition plans to bolster independence on the boards of industry super funds were defeated this month after an ACTU campaign swayed key crossbenchers ahead of a Senate vote.

But The Australian’s analysis of fund records shows CBUS paid the ACTU $106,909 from members’ funds for president Ged Kearney to attend board meetings. The ­nation’s biggest super fund, Australian Super, paid $800,000 to five unions, including $136,487 to the ACTU for Dave Oliver’s spot on the board.

CBUS also paid $205,779 to the CFMEU for construction union national secretary Dave Noonan to attend board meetings over the past two years. 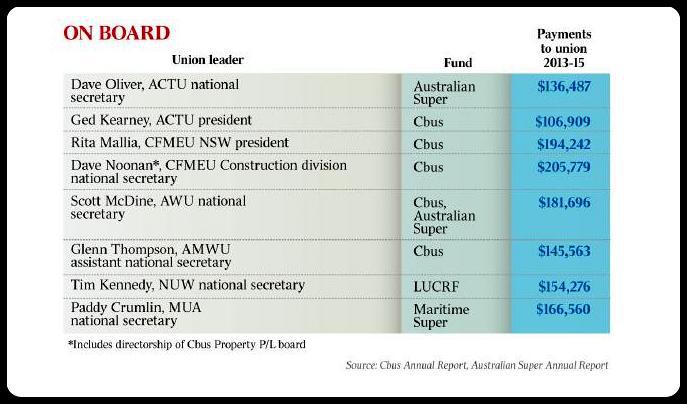 No the $22m figure is not true, for several reasons. And whatever the figure is, it would be entirely normal practice.

The simplest and most obvious reason is that the extrapolation in the article is entirely bogus. There is no explanation of how the supposed growth was calculated, but it looks suspiciously like it was done by projecting a line through the current year from a recent extreme low point, i.e giving the maximum possible growth slope. The slope clearly ignores several recent years in which payments to Union officials declined. The $22m figure is pure speculation and exaggeration.

Second the payments do not actually go to unions at all, but to union officials who also serve on the boards of the funds. Payment for such services are absolutely normal, and it would be unusual if they did not occur. There are similar payments to non-union officials. There are some newspaper articles that characterize the payments as "to unions" but it is not clear on what basis

Thirdly, and in response to the suggestion that having union officials on the board of a pension fund is somehow inherently underhanded, the funds mentioned (Cbus, Super Australian) are in fact founded, owned and operated on behalf of the unions in question. Having representation​ of the unions on the board is not only normal but expected, just like you would expect that a pension fund for employees of a company would have a representative of the company on the board.

Not the answer you're looking for? Browse other questions tagged politics australia finance .

14
More stars visible from the Australian outback than anywhere else on earth?
24
Do 20% of Australian children think pasta comes from animals?
5
Could the Australian Aborigines have Descended from Three People?
29
Will 36,000 people die per year due to the repeal of the ACA?
82
Will the healthcare premiums of a 64 year old making $26,500 a year grow to $14,600 under the GOP Health Care Plan?