Does the USA have the highest taxes?

I was listening to the Trump rally tonight in Ohio and Trump said: 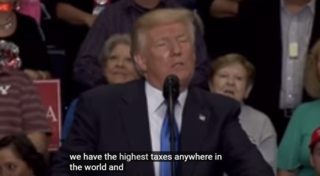 This sounds like a difficult claim to verify, does he mean corporate tax? Income tax? Is he factoring in VAT/GST? Don't they differ between states? Is he talking about federal taxes, or including state taxes? For which tax brackets?

Does the USA pay the highest taxes in the world?

As the Republicans in Washington prepare to dig into the coming round of budget negotiations, their top priorities will include an systemic overhaul for U.S. taxes, which President Trump has characterized as "just about the highest in the world."

But how much do Americans really pay compared with other nations? It may be less than you think. 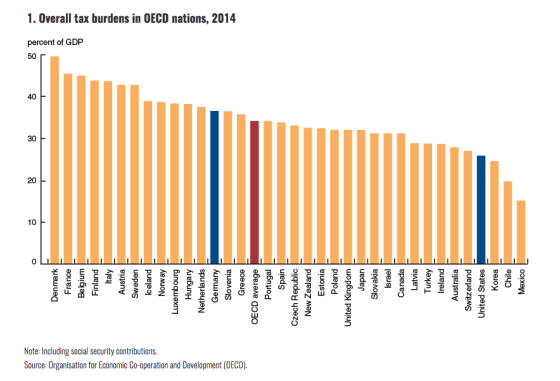 A research paper published this week by the Federal Reserve Bank of Chicago includes the above chart, highlighting the tax burdens of all 35 OECD countries as of 2014. With a tax burden of 25% -- a measurement that includes income, property, and various other taxes -- the U.S. is near the very bottom, well below the overall average of 34%. It ranks below all the measured countries except Korea, Chile, and Mexico.

Trump and other Republicans are right about one aspect of U.S. taxes, however. When it comes to taxing corporate profits, the U.S. does indeed have one of the highest nominal maximum rates in the world, at 35%.

The highest corporate tax rate is 38.5% (Cameroon) which is 3.5% higher than the US rate. But some states in the US have extra state based corporate tax of 1-12%.

The [US] marginal federal corporate income tax rate on the highest income bracket of corporations (currently above USD 18,333,333) is 35%. State and local governments may also impose income taxes ranging from 0% to 12%, the top marginal rates averaging approximately 7.5%. - Kpmg

So, US states that have local corporate tax above 3.5%, the rate is 38.5%+ and therefore higher than any other coutry in the world. But that doesn't apply to all state.

He would be right to say "some of our states have the highest corporate tax rates in the world."

It depends on which tax rate you are talking about and which countries you are including in the comparison.

The US does have the highest general top marginal corporate income tax rate in the OECD (a group of rich/developed countries), but worldwide it only has the third highest (after the United Arab Emirates and Puerto Rico). These can be further adjusted to use effective rather than merely nominal rates, but both of these measures are commonly used by economists and journalists, so it is unclear which one was being referred to in the speech.

On the other hand, according to Investopedia, the US has lower income tax rates than many other countries. For instance, the income tax rate for average-earning singles with no children in Belgium is 42%, 39.7% in Germany, 36.1% in Denmark, but only 25.6% in the US.

Not the answer you're looking for? Browse other questions tagged united-states taxes .

52
Do rich companies pay little/no corporate income taxes in the United States?
23
Do US companies pay significantly less taxes than European ones (based on tax rates)?

52
Do rich companies pay little/no corporate income taxes in the United States?
10
Are value-added taxes naturally progressive?
11
Is there a single US tax law that allows profits to be moved offshore to avoid taxes?
13
Does majority-white and majority-republican Owsley county have the highest SNAP usage?
61
If American churches paid taxes, how much revenue would that generate?
17
Does the US have the highest "natural" life expectancy?
7
Did the Washington Post ever advocate Amazon's position on sales taxes?
6
Does the USA have the highest cumulative CO2 emissions since 1750?
11
Did Elon Musk pay "the most [income] taxes ever in history for an individual last year"?