Did Corbyn promise to write off UK student debts? [closed]

The way that I remember things might not actually be as they happened. I accept that. However, I am sure that I recall the UK Leader of the Opposition, Jeremy Corbyn, promising to scrap all student debt prior to the last UK election.

Now, a mere seven weeks after the election, in the 24th July Metro newspaper: 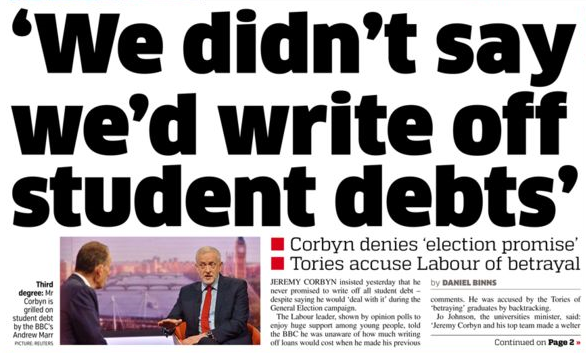 "We didn't say we'd write off student debts"
JEREMY CORBIN insisted yesterday that he never promised to write of all student debt - despite saying he would 'deal with it' during the General Election campaign.
The Labour leader, shown by opninion polls to enjoy huge support among young people, told the BBC he was unaware of how much writing off loans would cost when he made his previous comments. He was accused by the Tories of 'betraying' graduates by backtracking.

I realize that politics is all weasel words, innuendos, double meanings and "it depends what the meaning of the word 'is' is"

So, can anyone point to somewhere that Corbyn did actually say that?

The article headline seems like an answer to a strawman argument, I'd question who owns the paper that wrote it and what their political alignment is.

Corbyn said "We will scrap tuition fees...", specifically on already indebted students he said he would look into ways to "ameliorate that", some reporter later asks "Did you mean you wanted to write off all UK student debts?", he replies "nah I didn't say that, what a silly question", the headline becomes what you see in your question.

He said “We will scrap tuition fees and ensure universities have the resources they need to continue to provide a world-class education." as per the article, but the trick is this does not mean writing off current debt, the changes would be for future students.

12
Did Bill Ayers ghost-write for Obama?
23
Do police officers have monthly quotas of traffic tickets to write?
26
Did NATO promise not to expand into Eastern and Central Europe?
8
Did Prime Minister David Cameron commit necrophilia with a pig's head?
52
During Great Britain's coal-free day, were coal plants shut off, or active and generating power GB didn't use?
71
Is this photo of Jeremy Corbyn and caption accurate?
48
Did Trump promise to bring back waterboarding?
12
Did some people in the UK get £100k in benefits?