Are "Get Paid to Travel" ads part of a sex trafficking network?

Recently, on Facebook, the following images have been trending in my feed, people forwarding them on, claiming that most if not all of them are actually attempts to get women into sex trafficking (click to embiggen): 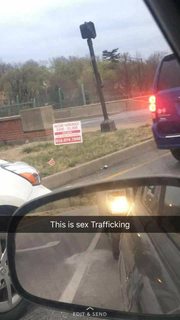 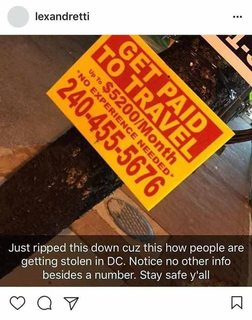 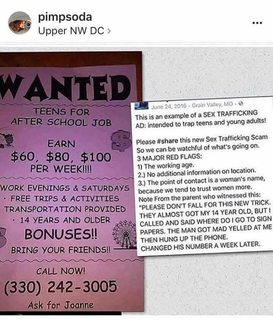 I'm a bit skeptical, both because some of the posts unironically invoke Pizzagate and because this sounds like the sort of thing that would be in an urban legend, people being sent to a location to find work and getting suspicious, and it turning out that it was a way to lure them into being commoditized. Lastly, the evidence for this being sex trafficking seems to largely be reports of calling the number for details and getting someone with a foreign accent who hangs up when they ask for more details, which sounds more like a general scam than sex trafficking.

8
Is this a photo of an actual ad posted by sex traffickers?

15
Are there 40,000 children of same-sex couples in California?
26
Are Fairtrade farmers paid worse than other farmers in the same regions?
10
Are confident guys more likely to get a girlfriend?
5
Are Australian Teachers only paid for 25 hours/week?
7
What are the chances of female-to-male HIV transmission during straight sex?
3
Are "young people aged 14 and 15 are allowed to have sex with each other" in Germany?
147
Are there 96 million workers in the US who want a job and can't get one?
16
Are brothels to have sex with animals increasing fast in Germany?
18
Are men more likely than women to accept an offer for casual sex?