Does the US have the highest "natural" life expectancy?

An article titled The Myth of Americans' Poor Life Expectancy claims that the US leads the OECD in life expectancy once the numbers are adjusted to remove deaths due to fatal injuries.

Unfortunately, the link to the research by Ohsfeldt and Schneider is broken, and I haven't been able to find the PDF anywhere else. And I can't find any other primary sources for this claim.

It is highly dubious.

This data comes from a 2006 book published by a conservative think tank, the American Enterprise Institute. The report is titled The Business of Health: The Role of Competition, Markets, and Regulation.

Sure enough, they ranked USA the highest after "standardizing" the (old) data: 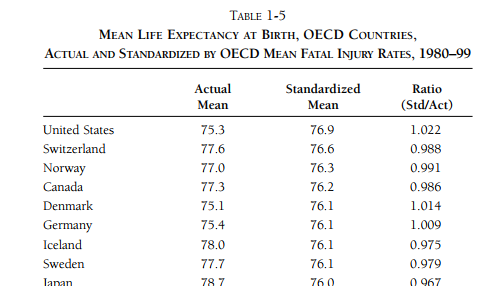 One clue that this shouldn't be trusted is that the "standardized life expectancy" - described as removing deaths from fatal injuries from the life expectancy tables - actually reduces life expectancy for many of the countries at the top of the raw table.

Not only does it fail to remove actual deaths from unintentional or intentional injuries for each country (instead using some coefficients from a regression of death rates on deaths from injuries from across the OECD - why do this? - the update to the article misdescribes this with "the adjustment factor was based on fatal injury rates relative to the average"), it pushes up the "standardized life expectancy" for countries, notably the USA, with high GDP per capita.

To me, this seems to suggest that the USA should be doing better than other countries on raw life-expectancy given its high GDP per capita, but is failing to do so.

Not the answer you're looking for? Browse other questions tagged medical-science united-states healthcare .