Daisy Grewal writes in the Scientific American in the article How Wealth Reduces Compassion:

But research suggests the opposite is true: as people climb the social ladder, their compassionate feelings towards other people decline.

Is that opinion supported by the scientific consensus?

There was a recent episode of Freakonomics that covered this (more than one in fact).

Short short version: more research is needed, but it's definitely not as obvious and/or cut and dry as news media sensationalizing those studies like to make it seem.

The whole transcript is every very informative and I strongly recommend reading/listening to its entirety, not just my quoted summary.

Andreoni, Nikiforakis and Stoop devised an improved version of the Scandinavian money-envelope experiment, which they ran in a Dutch city, and it didn't find the opposite effect, but failed to find a difference after adjusting for some confounders:

Our raw data indicate the rich behave more pro-socially. Controlling for pressures associated with poverty and the marginal utility of money, however, we find no difference in social preferences. The primary distinction between rich and poor is simply that the rich have more money

Also, whom the poor were (thinking they were) stealing from matters, in my opinion. In the Stoop experiment, the money was addressed to a middle-class Dutch neighborhood. So the poor (selected from social housing in the same city) were less likely to be "compassionate", money-wise about those likely richer than them. Would the result be the same if the money were addressed to a cancer-fighting charity? Or to a poverty-fighting charity? Or to some kid in Africa? It is actually known (granted from some laboratory studies) that

The Dutch study actually tried to control for this, unconvincingly in my opinion, by using the same middle-class address but rewriting the message so that it said that both the sender and receiver were cash-strapped (no details as to why were included in the message). And they found no difference in outcomes following this change in protocol.

The Dutch study found that the poor were less likely to return the money the closer they were to their pay check (which correlates negatively with how much money they had available). In fact this was their main finding:

While the difference in other arenas (such as tax evasion or charitable giving) may hinge on the fact that the rich have more money, in our study, the key fact seems to be that the poor have so little money. Our study therefore suggests an important notion: the financial pressures of poverty may make poor individuals sometimes behave less pro-socially.

So they don't exclude that variance in pro-social behavior may depend on the experiment/context. Saying that this type of money-envelope experiment invalidates other/prior experiments with different setups and measures seems thus unwarranted.

And another potential issue is that the Dutch study did not consider who the poor were stealing for. Was it to feed their hungry children? Because, again from laboratory studies, that makes a difference:

In other words, in laboratory experiments, there were more would-be Robin Hoods in the lower class.

They also advance some hypotheses how social class interacts with PRD, but the researchers themselves are rather reserved on those parts so I won't reproduce that here.

And probably the worst news, replication-wise comes from a PLoS one paper, which (using data mainly from Germany and the US) found mostly opposite effects

Across eight studies with large and representative international samples, we predominantly found positive effects of social class on prosociality: Higher class individuals were more likely to make a charitable donation and contribute a higher percentage of their family income to charity (32,090 >= N >= 3,957; Studies 1–3), were more likely to volunteer (37,136 >= N >= 3,964; Studies 4–6), were more helpful (N = 3,902; Study 7), and were more trusting and trustworthy in an economic game when interacting with a stranger (N = 1,421; Study 8) than lower social class individuals. Although the effects of social class varied somewhat across the kinds of prosocial behavior, countries, and measures of social class, under no condition did we find the negative effect that would have been expected on the basis of previous results reported in the psychological literature.

And one more interesting PNAS paper reports that 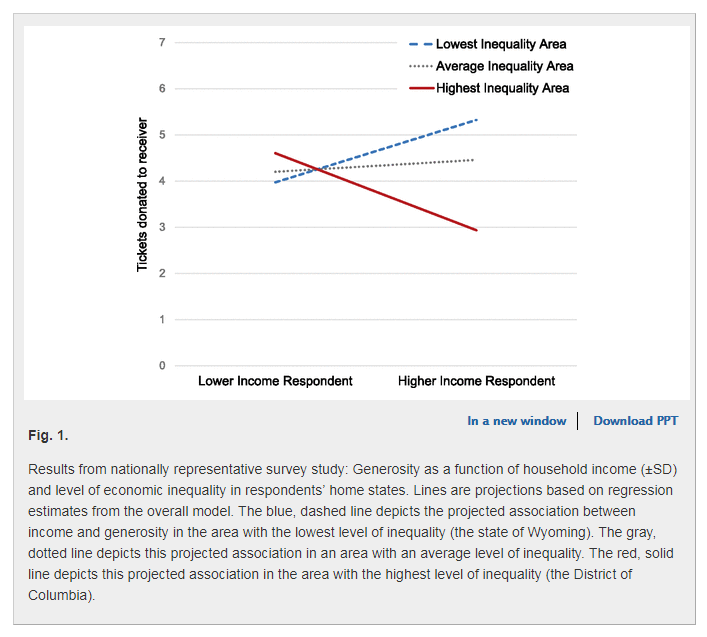 More research is needed, as the song goes.

20
Can a society become unhappier with an increase in wealth?
0
x percent of people own y percent of the wealth
16
Do the Jewish control a larger proportion of U.S. wealth than their proportion in the population?
3
Does sealing electrical outlets reduce heating costs?
28
Is the total cost of treating the uninsured in emergency rooms more expensive than government-subsidized urgent care would be in the US?
14
Does placing a fly on a urinal improve cleanliness in men's toilets?
2
Is 49% of Indonesia's wealth owned by 1% of its population?
90
Do the 26 richest billionaires own as much wealth as the poorest 3.8 billion people?