According to various social media posts (eg one and two and google search shows many results with the meme), Ibn Baz said the following in 1993: 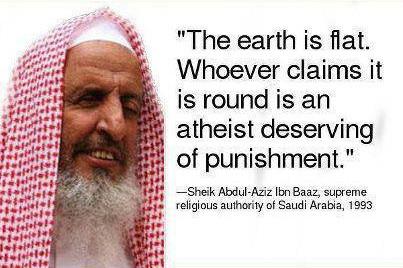 "The earth is flat. Whoever claims it is round is an atheis deserving of punishment" - Sheik Abdul-Aziz Ibn Baaz, supreme religious authority of Saudi Arabia, 1993

I found an Independent Newspaper article about Ibn Baz which says:

bin Baz in 1976 ruled that the Earth was flat and that it was a great blasphemy to suggest otherwise. His critics often dust off this fatwa in their call for change in the conservative kingdom.

The Independent article is about Abd al-Aziz ibn Baz. But the meme photo is showing Abdul-Aziz ibn Abdullah Al ash-Sheikh. Did any of the two clerics made the statement attributed to Ibn Baz with a photo of ash-Sheikh as shown in the meme above?

This supposed fatwa relates to Sheik Abdul-Aziz Ibn Baaz, but the 1993 date is much too recent, and it is a false accusation of being a fatwa.

There is an official statement from the Kingdom of Saudi Arabia, portal of the General Presidency of Scholarly Research and Ifta', about this issue:

To proceed: "Al-Musawwir" magazine has published in its issue no. 2166 dated 15 April 1966 A.C., on page 15 what reads: There is news from Saudi Arabia declaring that the Vice President of the Islamic University there published an article two months ago in all newspapers in which he deemed lawful to kill anyone who says that: 1) The Earth is round. 2) It orbits the Sun and not the opposite.

In reply to this; I say that this is a serious vilification; for the article stated by the author was published and read by everyone in every local newspaper in Ramadan 1385 A.H., and there were no single mention in the issue of the Earth's roundness or that it is lawful to kill whoever holds this opinion. Furthermore, what I have transmitted from the opinions of the knowledgeable Ibn Al-Qayyim (may Allah be merciful to him) includes proof that the earth is round. Thus, how on earth could Ahmad Baha' Al-Din or those who have transmitted this news to him propagate such falsehood and attribute it to an article that was published and read by people everywhere. (May Allah be Glorified), I wonder how bold is that slanderer! However, there is no wonder that such a lie is being woven by an advocate of apostasy and destructive ideologies. Allah (Glorified and Exalted be He) says: It is only those who believe not in the Ayât (proofs, evidence, verses, lessons, signs, revelations, etc.) of Allâh, who fabricate falsehood, and it is they who are liars.

I only deemed it lawful to kill whoever claims that the Sun is static, and refuses to repent of this after being ordered to. This is because denying the circulation of the Sun includes disavowal to Allah (Glorified be He), His Great Book and His Honorable Messenger. It is well-established in the Din (religion of Islam) by way of decisive evidence and Ijma` (consensus) of scholars that whoever refutes Allah (Exalted be He), His Messenger (peace be upon him) or His Book is Kafir (disbeliever) and their blood and money become violable, except if they repent (of this), otherwise they must be killed. Thanks to Allah that this issue is not debatable among scholars.

Additionally, the official site catalogues the sheik's fatwas, and under the category Islam and Modern Science two out of the ten listings are "Proof the Earth is Round", both of which link to the above statement.

Further detail of the original statement that Sheik Ibn Baaz made is in the 12 June 1966 Oregon Statesman, page 4, which says:

From Jiddah, South Arabia comes the report of an article by Sheik Abdeaziz bin Baz, vice president of the Islamic University of Medina. He wrote: "Much publicity has been given ... to the theory that the earth rotates and the sun is fixed ... I thought it my duty to write a brief essay that would guide the reader to the proofs of the falsity of this theory and to realization of the truth ' Hence I say the Holy Koran, the Prophet's teaching, the majority of Islamic scientists and the actual fact all prove that the sun is running in its orbit, as Almighty God ordained, and that the earth is fixed and stable, spread out by God for his mankind and made a bed and a cradle for them, fixed down firmly by mountains lest it shake." After numerous quotations from the Koran and quotations from old Islamic teachings the shiek declared: "Anyone who professed otherwise would utter infidelity and deviation, because such an act is a charge of falsehood toward God, the Koran and the Prophet," Sheik bin Baz continued. This controversy might lodge in the lap of King Feisal of Saudi Arabia. He is a faithful Moslem who wouldn't dare discredit the Koran. Yet he can't escape the facts learned since Mohammed wrote the Koran. This controversy will not go that far. Somewhere along the line the sheik's contention will be sidetracked and the Moslem world continue to adapt itself to current scientific knowledge.

So the closest he came to saying the Earth is flat is the phrase "the earth is fixed and stable, spread out by God for his mankind".

More information about the timeline of events is in the 16 June 1966 Nashua Telegraph which explains that Ibn Baaz wrote his article in January 1966, then the Egyptian publication accused him of saying the Earth is flat and the sun revolves around the earth, then in May of 1966 he published the clarification saying he only intended the part about the sun revolving around the earth. The Nashua Telegraph also says the original January 1966 article included the statement that a person professing otherwise is an "infidel, who should be asked to renounce this attitude and repent or else be executed to die an apostate and infidel whose wealth then goes to the Moslem public treasury."

Not the answer you're looking for? Browse other questions tagged quotes islam astronomy saudi-arabia .

12
Did the head of the Joint National Committee on language claim Jesus spoke English?
13
Did Gandhi say "The most violent weapon on earth is the table fork"?
27
Did the Saudi mufti issue a fatwa saying that men can eat their wives?
14
Did classical Greeks claim that children are solely products of the father's sperm?
12
Did the Mayans believe the Earth was flat?
8
Did an Indian king claim to witness the moon split?
20
"The Flat Earth Society has members all around the globe"?
10
Did the Indian Mathematician Aryabhata state that the earth was round and calculate diameter of earth
4
Did The Maharal of Prague claim this verse was recursive?
5
Did Saudi Arabia deposit 1 billion dollars to pay the US for troop presence?