"Chance for a Spinster": Is this a real newspaper advertisement from 1865?

I recently encountered this tweet, claiming that an ad was placed by a man "Looking for a wife in 1865." (Click image to enlarge.)

CHANCE FOR A SPINSTER. -- A young man in Aroostook County, Maine, advertising for a wife, speaks of himself as follows: "I am eighteen years old, have a good set of teeth, and believe in Andy Johnson, the star-spangled banner, and the 4th of July. I have taken up a State lot, cleared up eighteen acres last year, and seeded ten of it down. My buckwheat looks first-rate, and the oats and potatoes are bully. I have got nine sheep, a two-year-old bull, and two heifers, besides a house and barn. I want to get married. I want to buy bread-and-butter, hoop-skirts, and waterfalls for some person of the female persuasion during life. That's what's the matter with me. But I don't know how to do it."

The tweet has, at this time, more than 2,000 retweets, so I hope it meets Skeptic's notability standards. (I also found a similar claim on reddit by searching Google for the first few lines of the article.)

I requested more information from the tweeter, but we'll see what happens. (I am not very hopeful of a response; with over 200 replies, I doubt mine will garner any special attention.) Google Image search was not very helpful.

So, my questions are:

As Samuel said, the particular version shown in the OP is from 02 September 1865 Harpers.

However, the story had been circulating and distorting for at least a month by this time.

The earliest version that I see so far is in the Wheeling daily intelligencer, July 27, 1865

This version instead begins:

A fellow in Aroostook County, Me., answered a New York advertisement, representing that he could furnish any person with a wife. The advertiser replied, directing the writer to a neighboring asylum for idiots! The same youth not at all abashed, whose name is John Morris, speaks of himself as follows: "I am eighteen years old, have a good set of teeth, and believe in Andy Johnson...

So in the earlier version of the story, the man was answering an advertisement, not himself advertising.

A History of Lumbering in Maine says:

Portland Eastern Argus, July 20, 1865 carried the following letter from a young man in Aroostook County. I am eighteen years old, have a good set of teeth, and believe in Andy Johnson, the star-spangled banner, and the Fourth of July...

So someone would need to find that issue of Portland Eastern Argus to better answer.

(A 9 August 1865 article in The South-western of Shreveport, Louisiana instead cites to the Houlton Times as the paper where the man originally published his letter)

The 'ad' is obviously a joke. "Humors of the Day" is to Harper's Weekly what "Laughter is the Best Medicine" is to Reader's Digest.

To be absolutely sure, just look up from the ad on this page from that issue of Harper's Weekly. 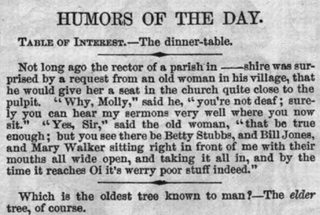 Not long ago the rector of the parish in ---shire was surprised by a request from an old woman in his village, that he would give her a seat in the church quite close to the pulpit. "Why, Molly," said he, "you're not deaf; surely you can hear my sermons quite well from where you now sit." "Yes sir," said the old woman, "that be true enough; but you see there be Betty Stubbs, and Bill Jones, and Mary Walker sitting right in front of me with their mouths all wide open, and taking it all in, and by the time it reaches Oi [Of?] it's werry poor stuff indeed.

Granted, the joke has not aged particularly well (nor has the rest of the column), but it obviously is not meant to be taken seriously. It was intended as a joke, which also explains why it changed upon retelling as mentioned in DavePhD's answer.

Also, from another page from Harper's Weekly (another obvious joke in a section titled "Humors of the Day:

Not the answer you're looking for? Browse other questions tagged united-states marriage .

14
Did this US judge rule that poker is a game of skill and not chance?
6
Is this a US military armored vehicle modified for railroad use?
11
Is this picture of Trump making people swear to vote for him genuine?
3
Is this YouTube segment from the group known as "Anonymous"?
76
Is this Swedish government pamphlet a guide for men who have married underage girls?
32
Is this picture from an abortion clinic dumpster?
17
Is this heart transplant denial letter from an insurance group?
8
Is this 1977 “thank you” letter from Joe Biden real?
6
Is this metric system video, apparently taken from Fox news, a deep fake?
6
Is this "Dear Liberal Communists" poster a real poster from Turning Point USA?