Rasmussen Reports say that Donald Trump's approval rating is at 50%.

While naturally subject to sampling errors, this number seems very high to me. Is Donald Trump truly this popular in the United States? Is this an outlier report?

FiveThirtyEight is a data blog that covers politics heavily. One of their projects tracks what different polls say about Trumps approval ratings. They also track pollsters across time, and rate their reliability. As Oddthinking pointed out in the comments, "this is tricky to answer." Five Thirty Eight attempts to answer this by looking at reams of data from many different pollsters. They give Rasmussen a C+. Rasmussen's polls tend to over predict Republican support.

Five Thirty Eight's aggregate numbers for Trump's approval are currently 38.6% approval. The Rasmussen poll is included in this aggregate reporting. It shows far higher support for Trump than the other polls.

Here's a graphic 538 put together to illustrate this. 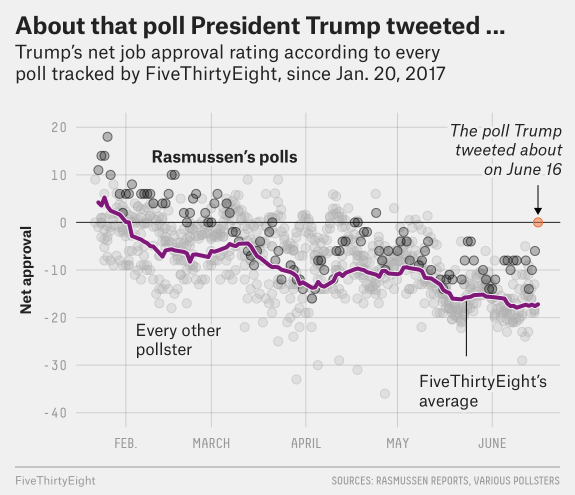 Further reading on how Five Thirty Eight rates pollsters. They look at how well results of polls compare to actual outcomes of elections.

Rasmussen Reports has a trends page that shows their historical results. The specific result being discussed is the 16-Jun-17 result. It's worth noting that this is the best result on Rasmussen for Donald Trump since April.

One explanation for this might be a rally around the flag effect after the baseball shooting. People who are unhappy with other aspects of the Trump presidency might be happier about his response to this shooting. Or they may simply find unity more important than other things. The 16th result would include two days of polling after the shooting, which happened in the early morning (around 7 AM). However, Gallup (the other daily poll with a rolling three day average) does not show an abnormally high result on those days. They are 38%, which is in the 36-39% range of the previous week.

Rasmussen doesn't poll on weekends anymore, but Gallup's weekend polls have Trump at 39%. This is at the high end of their normal range but still within it. The weekend polls are taken entirely after the shooting.

Rasmussen always does what are called Likely Voter polls. That means that they try to determine who will be voting. Most pollsters find that likely voting information is unreliable this far out and use registered voter polls instead. For various reasons, registered voter polls often favor Democrats more than election results.

Rasmussen offers four possible responses: Strongly Approve; Somewhat Approve; Somewhat Disapprove; Strongly Disapprove. They have found that this gives higher approval ratings compared to polls that offer two choices. This is because people who would answer Somewhat Approve on Rasmussen might not be willing to say just Approve on another poll. Other pollsters also include No Response as a possibility. Rasmussen only includes their four choices.

Rasmussen polls daily and the June 16th result is actually based on polls taken June 13th-15th. See the press release:

Daily tracking results are collected via telephone surveys of 500 likely voters per night and reported on a three-day rolling average basis. To reach those who have abandoned traditional landline telephones, Rasmussen Reports uses an online survey tool to interview randomly selected participants from a demographically diverse panel. The margin of sampling error for the full sample of 1,500 Likely Voters is +/- 2.5 percentage points with a 95% level of confidence.

It's also worth noting that what Rasmussen recommends using at this point in the election cycle is not the overall approval but what they call the Approval Index. The Approval Index is the difference between those who strongly approve and strongly disapprove. Trump is at -11 on that index as of June 16th, 2017.

48
Is Donald Trump's ratio of bankruptcy to businesses consistent with the success rate of other entrepreneurs?
87
Was Donald Trump's father a member of the KKK?
95
Was Donald Trump at ground zero helping out on 9-11?
5
Was Bernie Sanders not a registered Democrat (in 2017)?
58
Was Donald Trump's scene from Home Alone 2 removed by the CBC in 2014?
37
Is Kamala Harris' approval rating the lowest of any vice president?