Are seat straps in child restraints less effective when they are twisted?

My wife and I have seen many parents in a rush buckle their kids in a car seat despite one of the straps being twisted (I've even done it myself a few times- don't tell my wife- because I had a hard time believing it was that big of a deal.)

I did some research and found many articles online claiming that if the seat strap of a child restraint car seat is twisted it makes it far less safe.

To me these claims seem unscientific. Has anyone done research comparing the effectiveness of a car seat when the straps are straight vs. when they have a single twist?

I found a study (Misuse of child restraint systems in crash situations-danger and possible consequences) that tested how serious different types of child restraint system (CRS) misuse are. They measured the impact on several different "body segments": head and face (H); neck and cervical spine (N); chest (C); abdomen and lumbar spine (A); and lastly upper and lower limbs (L).

For each of these body segments, a risk factor has been given, from 0 to 3. A score of 0 means that neither films nor dummy measurements have shown an additional risk of severe injury. When a 1 is given, it means that, in the misuse situation, a slight effect has been observed but that the situation remains acceptable. If a body segment received a score of 2, it is because a clear influence of the misuse on the child dummy kinematics has been observed on the dummy measurements or on the films and that it means a higher risk of receiving injuries for a child in that situation. And finally, when the situation was critical, a score of 3 was given.

However, there is another danger—a twist can prevent the belt from being properly tightened, causing slack. Slack, in general, is very dangerous, since the child can be ejected from the carseat and hit their head (the study has numbers for slack too).

I did a rather frustrating search of the scientific literature. Your claim is fairly specific. A lot of the literature talks about inappropriately installed car seats, but they don't usually go into detail on exactly how each car seat in their data set was inappropriately installed. I frequently ran across the claim that inappropriate use of safety seats is both extremely common and dangerous [1,2, and others]. When I followed the sources cited to back up these claims, I ran into paywalls despite my university credentials.

This paper pointed out a confounding factor in studies that compare injury rates with and without proper car seat use:

Because sampling was based on the medical treatment obtained after the crash and thus the likelihood of an injury, subjects least likely to be injured were underrepresented in the study sample.

In other words, if you strap your child in properly, you might avoid the hospital altogether, and therefore avoid being in their study. That paper used statistical techniques to try and control for this effect. These two papers collected data, but declined to make comparisons. Is suspect that their relatively small sample combined with this confounding effect were why they declined to make comparisons. All three papers state that proper safety use is important. 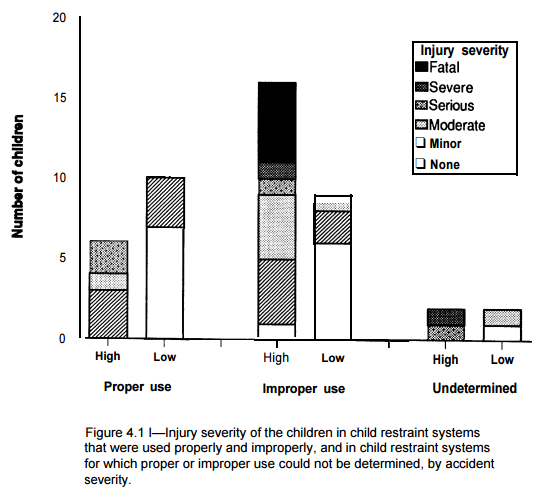 Although this data supports a broader version of your claim, it is not particularly high quality. The effects of car seat installation on injury rates was not the primary objective. The data here has a small sample size, because it is a subset of a larger broader data set. I suspect that the assessments of accident and injury severity are difficult to accurately measure.

This quote supports the claim indirectly. "Many restrained children survived very high-speed crashes without injury to the neck or other parts, with deceleration injuries confined to bruising from belt loadings." A seat belt is supposed to spread the force of the crash over its area. I would think that a twisted belt has lower area, and therefore higher pressure, and probably worse bruising.

Despite the lack of specific evidence, the claim seems plausible. In adults seat belt injuries are fairly common even when seat belts are worn properly. All of the force of the crash is concentrated in the area of the seat belt. (Seat belt injuries are far less severe than injuries from being thrown around a car unrestrained. Wear your seat belt.) Many of the properly restrained children in the NTSB report were still hurt. All seat belts, for adults and children, are designed to be used untwisted. My hypothesis is that twisting the seat belt can concentrate the same amount of force over a smaller area, and presumably result in more severe seat belt injuries.

If my hypothesis is correct a twisted restraint belt ought to be somewhat worse than a untwisted one, but still way better than no restraint at all. The effect of untwisting a restraint is small compared to the effect of wearing one. In any scientific study large effect sizes are easier to measure and prove. The studies reviewed are able to find an effect despite their issues with confounding factors, imprecise measures of severity, and problematic reporting methods. The size of their effect is presumably bigger than the noise. For a small effect such as a twisted seat belt, the study might have to be huge.

However, many these limitations on studies don't apply to laboratory tests or simulations. It is possible that someone experimented with twisting the seat belt on a crash dummy. These people could have, but didn't. It is also possible that someone used a virtual crash dummy to examine the same question. I am out of time to research this question, but if another SE user has time, I suggest starting your search there.

9
Seat belts in cars save the lives of occupants in cars, but do they lead to lower deaths for all road users?
4
Do children who attend pre-school get sick less often when they start kindergarten?
7
Are manual transmission cars stolen less?
14
Is a car's fuel consumption increased when the headlights are on?
8
How effective are reflectors at preventing pedestrian deaths?
13
Are American standards on automotive turn signals demonstrably less safe than European ones?
3
Did hundreds of thousands of people die due to lack of seat belts in the period before they were made mandatory?
14
Were the vast majority of people on the National Sex Offender Registry children when they committed their crime?
3
Do modern diesel cars emit fewer fine dust particles than they suck out of the air when driving in a big city?