Did Betsy Ross make the first US flag?

I think that there is a common idea that the first US flag was designed by Betsy Ross, who told George Washington to change the flag from 6-pointed stars to 5-pointed stars. Due to this, pictures of her often demonstrate her sewing the flag, like this one: 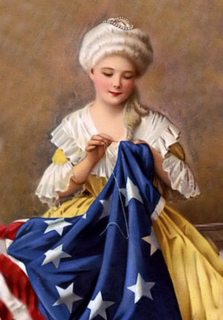 However, I've heard it said that it's not true with descriptions ranging from

There is no archival evidence [...] to support this

[her] family were just looking for a quick buck!

from The Big Bang Theory.

Is is actually true that she made or even just designed the flag for George Washington, or is this a fabrication?

Did Betsy Ross make the first US flag?

Possibly, but doubtful, as it seems to have fallen into legend as Francis Hopkinson is the only person to have claimed to have designed the flag in his lifetime.

Ross supposedly sewed the flag based on a drawing given to her by George Washington. However, no actual evidence exists that Betsy Ross made the first American flag. In fact, the first public mention of her story didn't occur until almost 100 years after the fact.

At least one other woman — Rebecca Young — has also been given credit for making the first flag. Some of Young's children have claimed that she created the first flag.

Rebecca Young's daughter, Mary Pickersgill, made the “Star-Spangled Banner Flag" that flew over Fort McHenry during the Battle of Baltimore in the War of 1812. It was her flag that inspired Francis Scott Key to write the poem that would become the U.S. national anthem.

Still others believe it was Francis Hopkinson from New Jersey who designed the first flag. Hopkinson was one of the signers of the Declaration of Independence who later served as chairman of the Continental Navy Board's Middle Department.

Hopkinson was the only person to have claimed to have designed the first flag during his own lifetime. He even submitted a bill to Congress for his work. Although no one contested his claim, he was not paid for his work because he had already received a salary as a member of Congress.

Although it's unclear who came up with the design and actually sewed the first American flag, we do know for sure that the Second Continental Congress passed the Flag Resolution on June 14, 1777. It stated: "Resolved, that the flag of the United States be thirteen stripes, alternate red and white; that the union be thirteen stars, white in a blue field, representing a new Constellation." - Who Made the American Flag?

Wikipedia has this to say about the Flag Controversy:

The legend of Betsy Ross as the designer of the first flag entered into American consciousness about the time of the 1876 centennial celebrations, owing to the efforts of her grandson, William Canby. This flag with its circle of 13 stars came into popular use as a flag commemorating the nation's birth. Many Americans today still cling to the Betsy Ross legend that she designed the flag, and most are unaware of Hopkinson's legacy. The circle of stars (a circle connotes eternity) first appeared after the war ended and after Hopkinson’s original design.

9
Are there banned words in New York standarized tests?
20
Did Obama have a marine demoted for correcting him?
11
Do the 3 red stars on Washington DC's flag represent 3 city states?
10
Are United States scientists building a Stanford Torus space station in the Ukraine?
12
Do these photos from the Civil Rights Era show Bernie Sanders?
111
Did close to 3,000 Puerto Ricans die in Hurricane Maria?
2
Have 82 officers been charged for on-duty shootings since 2005?
7
Did H. Ross Perot call Maya Lin an “Egg Roll?”