Was EU flag's design inspired by the statue of Virgin Mary?

In this video it is claimed that the person who designed it was passing the statue of Virgin Mary with 12 stars and applied it to the design of the flag. How much of this claim is true? 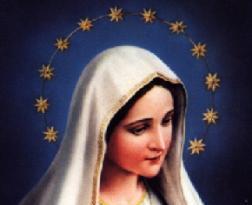 In 1987, following the adoption of the flag by the EEC, Arsène Heitz (1908–89), one of the designers who had submitted proposals for the flag's design, suggested a religious inspiration for it. He claimed that the circle of stars was based on the iconographic tradition of showing the Blessed Virgin Mary as the Woman of the Apocalypse, wearing a "crown of twelve stars".

The flag was introduced 1955 as the flag for the Council of Europe, and subsequently adopted by the European Union in 1986.

The number of stars was a matter of compromise, not one of inspiration.

So they settled on 12 stars, "the symbol of perfection and completeness and bringing to mind the apostles, the sons of Jacob, the labours of Hercules, the months in the year, etc." (CoE website)

That an explicitly Christian inspiration for the number twelve was voiced at that time is hugely unlikely, as Turkey had rejected the use of the Paneuropean Union flag due to the use of a cross.

(Europaflagge -- Geschichte on DE:Wikipedia) -- (Flag of the Council of Europe on Fahnenversand.de quoting a CoE document (currently unavailable))

As for the blue background, that was already present in the earlier flag of the Paneuropean Union, and featured strongly in the various suggested designs.

That being said, the designer -- Arsène Heitz -- claimed such an inspiration post factum in 1987. Paul M. G. Lévy, then Director of Information at the Council of Europe responsible for designing the flag, denied being aware of such connotations, and points out that Heitz did submit a lot of designs, including the 15-star variant.

10
Was there a spike in hate crimes after the Brexit referendum?
13
Was a "large number" of new COVID-19 clusters in the United States seeded by travellers from Europe?
10
Was the UK the third poorest member of the EU despite being the second biggest net contributor in 1979?