Did the Soda Pop Board recommend drinking cola earlier?

I just came across this image: 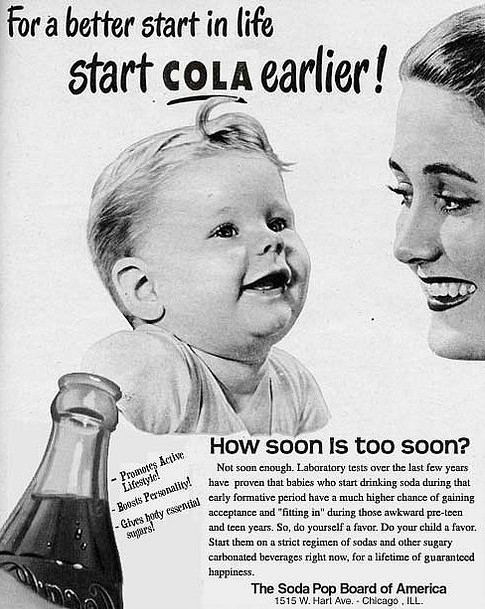 It appears to be an advertisement that one might find in a magazine or newspaper, and it has some pretty ridiculous claims:

For a better start in life start cola earlier!

How soon is too soon? Not soon enough. Laboratory tests over the last few years have proven that babies who start drinking soda during that early formative period have a much higher chance of gaining acceptance and "fitting in" during those awkward pre-teen and teen years. So, do yourself a favor. Do your child a favor. Start them on a strict regimen of sodas and other sugary carbonated beverages right now, for a lifetime of guaranteed happiness. The Soda Pop Board of America - 1515 W. Hart Ave. - Chicago, ILL.

Then on the side:

I'm not terribly worried about the spurious claims it makes, I'm just wondering if this image was real (or based on real marketing material) or just a spoof?

It looks like this was a fake ad by RJ White, made for a JD Ryznar, at his request:

Hey, if any of you dudes, clever with Photoshop or something siminar, are bored a work today, I wonder if you could do me this favor:

Create an advertisement from "The Soda Pop Board Of America" Advertising the benefits of giving soda pop to babies. I at least want a picture of a baby and a picture of a can of soda pop in the same picture with some writing in it. Some ideas for the writing:

See, there's this dude at work that has a baby, and I keep telling him he needs to give soda pop to his baby, but the fucker won't listen to me, so I need some 'Official Word' from the Soda Pop Board.

RJ White had this to say on the ad (from the original link above):

About seven or eight years ago, I made this fake ad, exhorting parents to give soda to their babies. It was done on a bored afternoon when J.D. Ryznar asked for someone to make that very specific thing on his livejournal. I whipped it together, posted it to the web, joke over.

Not the answer you're looking for? Browse other questions tagged marketing soda .

27
Can tapping the top of a soda/pop stop it fizzing over?
8
Does drinking any type of soda increase the risk of Type 2 Diabetes?
21
Is drinking a soda as bad or more harmful than smoking a cigarette?
2
Did the Kinki Nippon Tourist Company change its name?
13
Did food industry make their instant cakes harder to cook in the '50s?
23
Is this description of the processes which take place in the body for an hour after drinking Coca Cola accurate?
14
Did Nike get its slogan "Just do it" from the last words of a murderer facing execution?