Did Theresa May say that girls' having male role models starts to curb the promotion of lesbianism in schools? 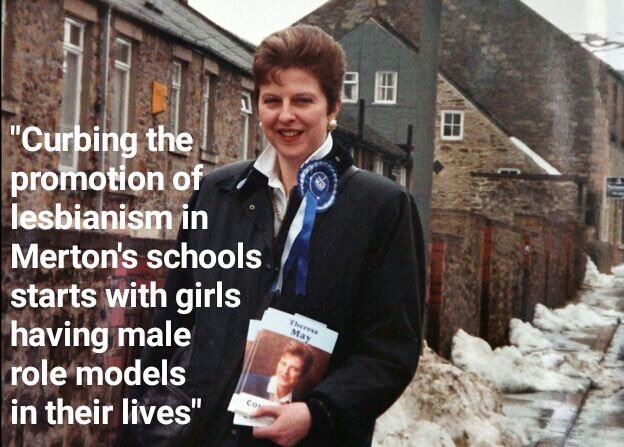 The concern with the image is the text

Curbing the promotion of lesbianism in Merton's schools starts with girls having male role models in their lives.

No citation is given. Are there any trustworthy sources for this?

Very difficult to prove a negative, but Buzzfeed tried.

This picture of Theresa May allegedly talking about the need to curb "the promotion of lesbianism in Merton's schools" went incredibly viral over the weekend despite little evidence she actually said it.

Actually, "little" is an exaggeration. The only evidence they found was that actual tweet.

Without any substantial evidence that she did say it, it seems only fair to assume she didn't say it.

Also, it seems implausible that in 1992 a politician would make such a mock-worthy statement and there would be no record of it.

Finally, given that there is no record of it, how would the person who made the meme know about it?

Edit: a commenter emphasizes that "there is no online record of it". In response to that, see here for how a slander from 30 years earlier could be exposed by information that was supposedly not available online.

Not the answer you're looking for? Browse other questions tagged politics quotes united-kingdom .

5
Did Taro Aso say that Japan should emulate the Nazis in amending the constitution?
50
Did Freeman Dyson say that atoms have awareness?
2
Did Tony Benn say this about "the establishment"?
45
Did Donald Trump say that muslims should be visibly marked?
59
Did Martin Schulz say that it is not the EU philosophy that the crowd can decide its fate?
2
Did Ariel Sharon say that the Jewish people control America?
12
Did Comey say that Trump did not try to obstruct justice?
8
Did the former prime minister of UK say this about the Koran?
6
Did Paul Offit, MD, say that aluminum plays an important role in the development of a healthy fetus?