Is this map of terrorist attacks in Europe accurate? 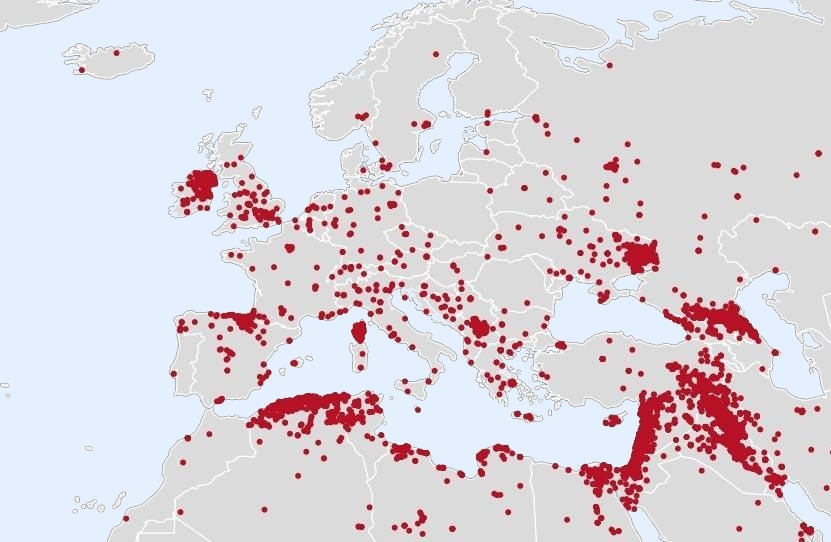 Background: The map gained popularity because of ongoing discussion about immigrants. Poland firmly opposes immigration from Muslim countries (North Africa, Middle East) and obligatory limits of immigrants European Commission want to impose. This country is also a big gap on this map. Some nationalists claim that there is no terrorism in Poland, because of their immigration policy.

Source of the Map

It is very likely that this map uses the Global Terrorism Database as a source, likely from 2001 to 2014, and there is no reason to doubt its accuracy.

The two dots in Iceland are the two terrorist attacks in Akureyri and Reykjavik in 2012 and 2014.

The dot in Portugal represents a terrorist attack in Lisbon in 2011. Note that this was not an Islamic attack, but an Anarchist attack.

We can assume that the map shows attacks after 2001, because before then, there are recorded terrorist attacks in Poland. This is the earliest occurance of the map that I could find, which mentions 2001.

We can also assume that the map is from before 2015, as the high number of attacks in Finland are not included.

The GTD also provides their own map, but it's for a 40 year span. Still, it shows a similar tendency as the map from the OP.

Quality of the map

Note that the map from the OP displays attacks as dots, which is a poor representation for what the map wants to express.

The heatmap from the GTD linked above better visualizes the concentration of terrorist attacks.

Note that the definition of terrorism by the GTD does not just include major attacks or attacks with multiple fatalities. It also is not limited to a specific motivation (Islamic for example):

Conclusions to draw from the map

We can't draw the conclusions proposed in the OP from this map for various reasons, among them:

The claim that there are terrorist attacks all over the world but not in Poland is wrong.

The claim that the map presents a set of data, however incomplete, is correct.

The accepted answer explains where the data comes from, it's the recorded incidents after 9/11 from the GTD. But I think it's also necessary to explore the accuracy of the data.

There are 2 issues with the accuracy:

There are also some stories that debatably don't classify, yet demonstrate that Poland does have a similar level of terrorism as some other European countries:

The data contains an incomplete set of events that can reasonably be classified as possibly terrorist in nature. Notably missing from the data are events in Poland, which the claim and the question is about.

No. The map seems to follow a vaguely correct pattern but there are obvious errors. For example hot spots like London are shown but when you look closer the attacks have the same density over the rural regions surrounding it.

Here is an alternative map from the university of Maryland. https://www.start.umd.edu/gtd/images/START_GlobalTerrorismDatabase_2015TerroristAttacksConcentrationIntensityMap.jpg Many spots allign which would imply that they cover the same period but there are spots that appear on the OP's map and not on MaryLands and vise versa.

Here is a discussion about what appears to be the world map in which the OP's map was taken. Including a discussion about individual points which are questioned. https://www.reddit.com/r/MapPorn/comments/3taz61/map_of_terrorist_incidents_since_911_37741893/

Not the answer you're looking for? Browse other questions tagged terrorism europe .

13
Do terrorist organizations have "sleeper cells"?
6
Were 53 terrorist attacks thwarted in New York City since September 11, 2001 and June 2015?
5
Were Spaniards threatened with terrorist attacks by an ISIS leader if they didn't vote Unidos Podemos?
30
Does this map show every car bomb explosion in Baghdad since 2003?
28
Is the number of Muslims correlated with terrorist attacks?
7
Has the Council of Europe called for the banning of British newspapers mentioning when a terrorist is Muslim?
37
Is this "fall of industrial production" graph accurate?
47
Have there been more than 27,000 Islamic terrorist attacks since 9/11?