Dear HSC students please don't get upset with your results. Remember i am a chai wala & Arvind Kejriwal is from IIT Kharagpur
#HSCresults2k17 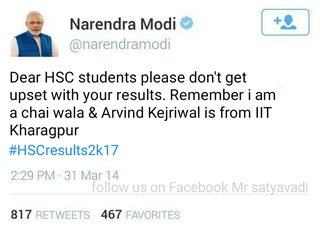 Did he (or his social media handling group or whatever) really tweet this? Is this a real tweet?

This tweet is almost definitely fake, for multiple reasons.

According to the screenshot, the tweet was sent on March 31st, 2014.

While some Twitter accounts can post 280 character messages, this feature did not exist when the Tweet was reported (May 2017) or when the timestamp says it was posted (March 2014)

Not the answer you're looking for? Browse other questions tagged quotes india .

16
Did Drauzio Varella say this quote?
10
Did Adria Richards tweet "Black people CANNOT be racist..."?
4
Did Horace say this quote about money?
17
Did Two Eagles tell this joke?
54
Did Rockstar Games post this tweet about EA games?
6
Did Yanis Varoufakis tweet to Lagarde about repaying dues?
0
Did Hussam Ayloush tweet that the [US] people want to bring down the [Trump] regime?
17
Did Ataturk say this about Islam?
8
Did Einstein say this about education?