Did the US Department of Defense produce and release the poster "tweets sink fleets"? 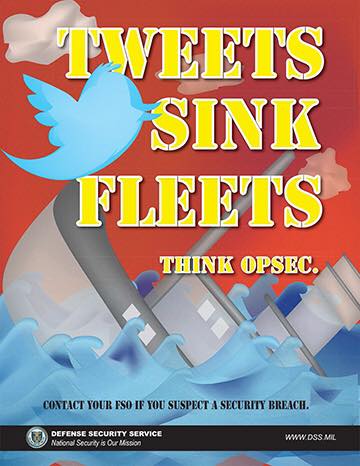 This has been floating around social media recently.

If it's not something you recognize it's a play on Loose Lips (might) Sink Ships which was utilized as American propaganda during World War II. On the bottom is a claim that the Defense Security Service created it.

The earliest reference I could find was an article with the same title on newmediastudies.nl in 2010. It references the Navy Command Social Media Handbook

The earliest Handbook I could find was from 2012 and does not feature the image.

The only way I can connect the image to dss.mil is through a link on their front page to Security Toolkits at Center for Development of Security Excellence under resources at Security Posters. Both sites are official sites of the DSS, they claim on a banner on top -

As you see, it's not a secure connection and neither is 'www.dss.mil', which also arises my suspicion.

I don't imagine the US government would specifically endorse or condemn a private service like Twitter. Additionally the logo for Twitter isn't exact and is not identified as a registered trademark.

So, is this a real production or is it a clever emulation that has been incorrectly identified as being produced by the US government?

Yes, it is an official product of CDSE which is a directorate of DSS which is under the "Office of the Secretary of Defense". See Department of Defense organizational chart.

There have been other similar products from various DoD organizations: 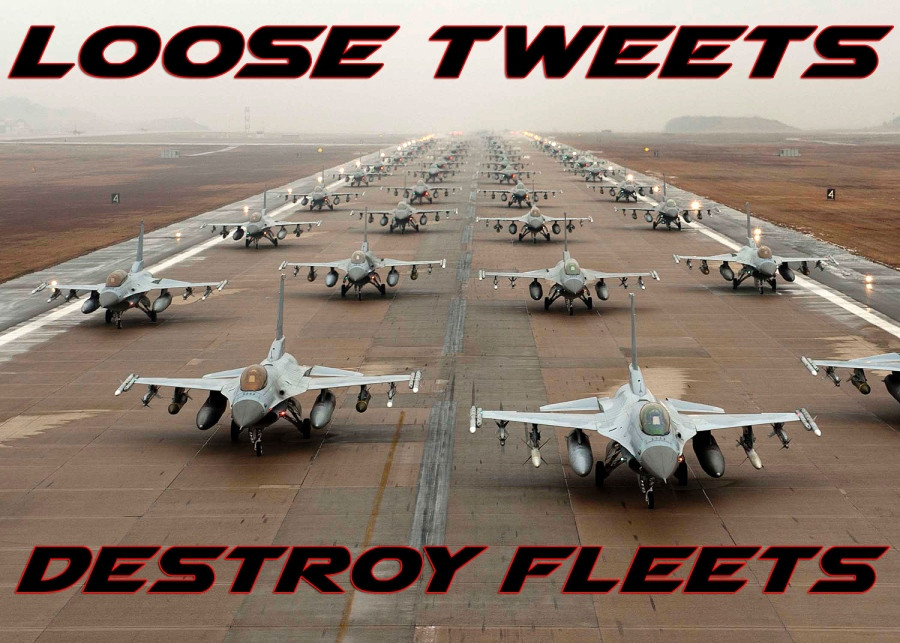 The above image was a US military product, published in Air Force 'Loose Tweets' slogan warns of social media dangers Stars and Stripes, 20 August 2015:

U.S. Air Forces Central Command’s online message last week from Al Udeid Air Base, Qatar, included a photo of a fleet of F-16 fighter jets parked on a runway. It was accompanied by a story reminding airmen “there is sometimes a fine line between letting your friends see what you’re up to and providing an adversary critical information about your connection to the military and its mission.”

The AFCENT article speaks directly to the threat posed by Islamic State supporters, who on at least two occasions have acquired and posted online personal data of military personnel, urging followers to attack Americans in the States and overseas in retaliation for the air strikes.

As social media keeps evolving and there’s more and more avenues to let your friends and family know what you are up to, those same avenues can be used by ISIS sympathizers, ‘lone wolves’, to track down and hurt our military members outside the safety of the base,” AFCENT’s Force Protection chief, Capt. Jonathan McDonald, was quoted as saying. He used an acronym for the Islamic State.

Most recently, a group calling itself the “Islamic State hacking division,” posted the names and identifying information such as email addresses and phone numbers of some 1,400 former or current military and diplomatic personnel who worked in the United Kingdom, according to London’s Sunday Times. Most of them were Americans, though much of the information was believed to be outdated.

Air Force tips to post smartly include the use of appropriate privacy settings and checking with a supervisor before posting anything work-related; also encrypting email about work missions, using a secure phone line and shredding important documents.

The “loose tweets” catchphrase is not new, having been adopted earlier by the Navy and Army.

56
Did Hillary Clinton refuse to designate Boko Haram a terrorist organisation when the FBI, CIA and the Justice Department asked?
17
Did NFL players used to remain in the locker room during the pre-game national anthem, prior to sponsorship by the Department of Defense?
17
Did a senior U.S. Justice Department official state that 3- and 4-year-olds can learn immigration law well enough to represent themselves in court?
12
Did the Houston Police Department intentionally target the house on Harding Street?
5
Did Biden ask the State Department to lift Kolomoyskyi’s travel ban?
16
Did the CDC lose a Federal Lawsuit to produce evidence that vaccines do not cause Autism?
7
Did Trump use the Defense Production Act in recent weeks?
10
Did Maureen Healy, who was shot in the head by Feds in Portland, write the following press release?