Did wind power supply less than half a percent of global energy in 2014?

From The Spectator: Wind turbines are neither clean nor green and they provide zero global energy:

Even put together, wind and photovoltaic solar are supplying less than 1 per cent of global energy demand. From the International Energy Agency’s 2016 Key Renewables Trends, we can see that wind provided 0.46 per cent of global energy consumption in 2014, and solar and tide combined provided 0.35 per cent. Remember this is total energy, not just electricity, which is less than a fifth of all final energy, the rest being the solid, gaseous, and liquid fuels that do the heavy lifting for heat, transport and industry.

Did wind power account for less than half a percent of total global energy usage in 2014? 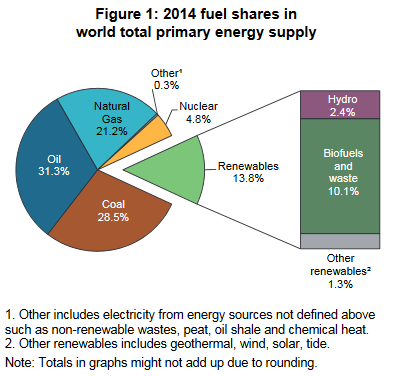 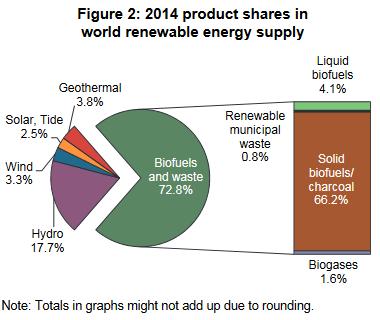 Combining these two graphs shows that Wind energy is 3.3% of the 13.8% of the renewable fuel share.

NO, (or YES dependent on the definition of primary energy) as answer to the claim: "Wind power does not account for less than half a percent of total global energy usage in 2014."

The wording of the report (from Jordys answer)indicates that they compared electrical output of renewables to the energy contents of combustibles. Putting these on the same graph can be wrong depending on the definition of primary energy.

Primary energy (1,3) is the energy contained in a fuel. So to speak the released heat in perfect combustion. Unburnt fuel is part of many energy conversion cycles. It is not the generated useful energy.

Non-Fuel based primary energy would be the input to the system, not the generated useful energy. For wind turbines this would be the energy contained in the wind, a perfect wind turbine can only get around 60% of the winds energy (Betz's law). For solar we have around 15-20% conversion efficiency. Therefore the primary energy of renewables is many times higher than the listed numbers.

Primary solar energy heats the earth during the whole year, if we assume that heating needs(relative to the avg temperature of space of a few Kelvin) are met by solar power, we get about 99.9+% (didn't calculate it actually) of the primary energy in solar.

A claim arguing that the definition of primary energy is usually as probably envisioned by the authors of the Energy Report, from Ref 3:

The graphs compare apples to oranges. Primary wind power should get a factor of 2-4, solar power a factor of 5-8 and hydro should also get some factor (but this is more difficult to figure out). I'm not sure how they calculated biomass, so I won't go into that.

The graphs are representing primary energy according to an outdated definition, as renewables are wrongfully represented by their secondary energy.

I see no indication in their report that they addressed the issue of defining primary energy with regards to renewables.

The definition of primary energy is taken according to 3. By this definition the graph is correct.

TL;DR Yes, their are numbers that can be interpreted that way, but it is doubtful that any conclusion can be derived from these numbers.

I would like to expand upon the excellently formatted answer of Jordy, where the original articles' first two diagrams are accurately quoted without further context.

We have a question where the title is "Did wind power supply less than half a percent of global energy in 2014?" and the question body is mostly a quote from The Spectator, that appears derisive of wind energy.

Since the question body contains such a quote, it seems worthwhile to not only find out whether some numbers allow such an interpretation, but also whether the numbers that allow this interpretation make sense when comparing wind energy to the rest of the energy in these numbers.

We first have to find out what "energy" is being talked about. The paper quoted uses "Total Primary Energy Supply (TPES)" in the first two presented graphs that are also presented in the answer above.

I can find a definition of TPES on the OECD iLib:

TPES equals production plus imports minus exports minus international bunkers plus or minus stock changes.

... based on the calorific content of the energy commodities and a common unit of account. The unit of account adopted is the tonne of oil equivalent (toe) which is defined as 107 kilocalories (41.868 gigajoules). This quantity of energy is, within a few per cent, equal to the net heat content of one tonne of crude oil. ...

Unfortunately, I haven't yet been able to find out how e.g. wind or hydro power get derived their TPES. What the heck is the "calorific content" of wind or solar electric power supposed to be? (Highly appreciated if anyone could edit that in here.)

To put the numbers into further perspective, the item Biofuels is clarified in the paper:

Due to its widespread non-commercial use in developing countries (i.e. residential heating and cooking), solid biofuels/charcoal is by far the largest renewable energy source, representing 66.2% of global renewables supply (Figure 2).

So what we have here is a Total Primary Energy Supply (TPES) pie chart. This includes all the worlds energy production(?), including some measure of an estimation of the "calorific content" of all the charcoal used in all the world developing countries.

And yes, for the OECD's definition of the TPES value of wind power, wind power contributes less that 0.5% of global TPES.

Inhowfar there is a logical conjunction between "Wind turbines are neither clean nor green" and "they provide zero global energyTPES" eludes me however.

I think the answer of WalyKu has some merit here: Even if we only take the raw numbers into account, it is not quite unlikely that we compare apples to oranges.

Not the answer you're looking for? Browse other questions tagged energy wind-power .

3
Will the Solar Wind Energy's Downdraft Tower plan produce more energy than it uses?
156
Do wind turbines consume more energy than they produce in a lifetime?
16
Did the wind power industry produce more radioactive waste than nuclear power plants?
20
Does nuclear power cause fewer deaths than other forms of electricity production, accidents included?
45
Did wind and solar exceed expected power delivery during Winter Storm Uri?