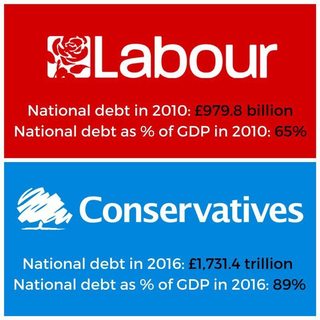 I saw this image being shared on my Facebook feed, and I was wondering the truth (if any) to it.

The debt figures as a proportion of GDP appear to be correct according to the Office of National Statistics, which can be considered the official source.

(Thanks @Henry for helping with the upload.)

However, the national debt appears to start rising rapidly in early 2008 under a Labour government (presumably in response to the 2007-8 Global Financial Crisis), when it was 35%, and has been rising at a lower rate since 2010 under the Conservatives, so it is at the same time a bit disingenuous in my opinion, plus ca change...

This is the chart from the Office for National Statistics Dikran Marsupial may have been trying to upload:

It gives numbers of

For values an equivalent chart is

so close to but not the same as your Facebook images

As ever, relevant on XKCD.

Yes, the debt has increased, but the annual deficit has been reduced. See this page for an historical view.

Though the answers so far have done a good job of pointing out the numerical facts of the matter, the political context needs elaboration. The question cannot be answered alone by proving or disproving the stated fact, but by giving context to the things implied from this fact.

At the time of the 2010 general election the government was reeling from the financial crisis of 2007-8. The Conservatives blamed the national debt on the Labour government. They claimed it was Labour spending which had triggered the crisis (and thus created much of the debt they inherited). This then formed the basis of Conservative strategy; they would cut public spending with a policy of austerity to reduce the deficit.

However, it's more complicated than that.

Firstly, they specified that they would cut the deficit, (not the debt) and this is an important distinction. Public debt being the total the government owes, and the deficit being the fact their revenue is negative: the difference between income and spending. Of course, one needs to fix the deficit before they can service the debt; but the Conservatives only pledged to improve the deficit.

Secondly, their claim that the crisis was due to government spending was rebuked by senior civil servants, and plainly false. Before the crisis (as other answers point out) public debt was 35% of GDP, and this increased significantly after the government was forced to purchase large corporations which would otherwise have imploded - as the government feared a second great depression.

The implication that Labour are better economically than Conservatives, owing to better public debt figures, is short-sighted or deceptive. It's true that under New Labour Britain enjoyed its longest economic boom. But this is less to do with their leadership and more to do with the economic climate.

To understand this, we need to go back to the Winter of Discontent. In 1979 Margret Thatcher won the general election for the Conservative party, promising to end British socialism; hoping to reverse a prolonged period of economic disorder and decline. She liberalised the economy, selling off and closing state industries, and deregulating the financial sector.

By the time of the 1997 general election the seeds of boom and bust sown by Thatcher in 1979 had blossomed. This was the high point of economic growth between two low points of economic decline. It's also worth noting that the issue is further complicated by another unstated fact. The present leader of the Labour party, Jeremy Corbyn, is an "old Labour" socialist, contrasting "new Labour" of 1997-2010. They had abandoned socialism and adopted Thatcherism. The Labour party of today is not ideologically consistent with the new Labour of the past... or even the Labour party just before Corbyn became leader.

In conclusion, the stated fact is true, but any implication drawn from it is false. Labour's boom and bust, and the consequences for the Conservative government which followed, were because of an economic environment independent of their leadership. It was a high growth environment back then, which enabled relatively low public debt.

Additionally the implication that the Labour party was better, so we should have a Labour government now, is a deceptive supposition, because the Labour party of today is not the same as then.

35
Has President Obama accepted more debt than all previous US presidents combined?
14
Does this photo show large crowds of protestors in Mexico?
16
Did Switzerland declare a "Science day" in honour of Dr APJ Abdul Kalam?
8
Was Hillary Clinton poisoned in 2016?
31
Was Facebook cited as a reason for a third of UK divorces in 2010 in which unreasonable behaviour was a factor?
6
Is this comparison of Carol Irving and David Laws MP accurate?
10
Do 7 out of 10 Australians support drug testing welfare recipients?
74
Did Obama defy precedent by not visiting the D-Day monument?
3
Does preferential voting disadvantage minor parties and independents?
5
Are the "DHSC Communications Team" using bots to flood social media with posts showing NHS workers supportive of government policy?