Is there a negative correlation between parenthood and pet ownership?

That's what a friend of mime recently stated. I.e. if one owns a pet one is less likely to be parent and vice-versa.

Are there any data available to support such a claim? I'm sceptical, because there is also the classical family + dog cliché.

Mostly for fun I've drawn a graph with dog traces to visualise the assertion ;-) 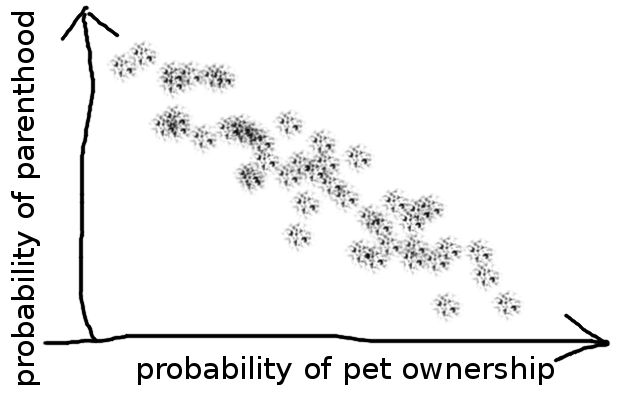 This appears to be false.

The Mintel paper referenced is titled, "The U.S. Pet Food & Supplies Market," but I can't find a link to an abstract or something similar.

This study supports the suggestion that dogs are more common in families who have older children (6-19 years), as has been generally observed in other countries.

For example (values in percents):

Thus, we see a see higher rates of ownership for households with more individuals living in them. I said "potentially" above, as we don't know the ages of these increased individuals. I will say, there's an obvious dip for three person households, so perhaps two parents with one child are seen with pets less often, and thus this hypothesis was created? Pure speculation, but I did see the big dip between two and four person households.

So, we see that families with all ranges of kids own pets all at rates above 50%.

The same site also has a similar breakdown to the table above (values in percents):

They have quite a list of sources at the bottom of the page, but without footnotes, I don't particularly want to figure out which one might contain this information. I'm thinking it might be the "U.S. Pet Ownership & Demographics Sourcebook" listed above, as this appears in the list of references. The webpage linked above for the sourcebook does have the following in it's list of figures provided (LINK)

Those would be the statistics to know, but I'm not paying $264 for the book! Nevertheless, the rest of the sources above seem to indicate that pet ownership is actually quite high among families with children, or at least higher for families with more than one child than with married/no-kid families.

Not the answer you're looking for? Browse other questions tagged psychology zoology sexuality children parenting .