Did the world Jewish population increase between 1933 and 1948?

A common claim among holocaust denial is that if Jews were killed, the 6 million figure is grossly exaggerated. A specific claim is that

according to the World Almanac the world population of Jews increased (!) between 1933 and 1948 from 15,315,000 to 15,753,000. If the German government under Adolf Hitler had – as alleged – murdered six million Jews those losses should have been reflected in the Jewish population numbers quoted in the World Almanac.

I see a few ways to explain this:

I've ordered these by likelihood, according to my opinion. If the source is faulty, what are the real world population numbers of Jews for these years? If the numbers are accurate, how is this reconciled with the six million killed figure?

According to the Nizkor Project, the numbers are real, but wrong, as they under-estimate the Jewish population before the Holocaust, and overestimate it after the Holocaust - not on purpose, but because no other numbers were available:

[...] all figures before 1949 were from 1938 estimates. Since the year of etimate is given at the top of the chart it is difficult to believe that the originator did not intentionally mean to decieve by negelecting this key piece of information.

This also matches the numbers from other sources.

The Jewish Virtual Library gives worldwide numbers - also based on Sergio DellaPergola - of 16 million in 1939 and 11 million in 1945. The Washington Post created a graphic based on these numbers: 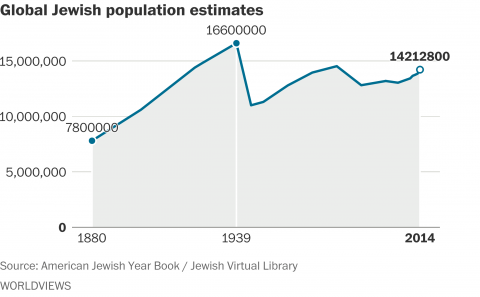 The American Jewish Committee estimated the world Jewish population at 16 million in 1939 and 11 million in 1946.

Not the answer you're looking for? Browse other questions tagged population holocaust jews .

34
Are 'white women' only 4% of the world population?
6
Did the government of Nazi Germany sell Mauser pistols to an underground Jewish army?
3
Did a Jewish boxer survive the holocaust by fighting fellow prisoners?
74
Did the maps for services such as Snapchat, CitiBike and StreetEasy label New York City as “Jewtropolis” for a brief amount of time?
8
Did 40% of the NKVD (Soviet police) leadership have Jewish nationality?
3
Will the human population reach 8-9 billion around 2050 and then decline?