Is this a chart of permits you need to build a highway in the United States?

At this point of US President Donald Trump's speech at the 2017 North America's Building Trades Unions National Legislative Conference, the President claims that this is a chart of 'some of the permits you need' to build a highway in the United States: 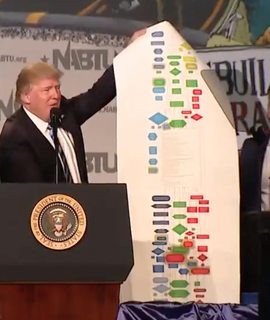 This is, if you want to build a highway in the United States, these are some of the permits that you need. It's a process that can take way over ten years, and just never happens. Then at the end of the period they vote against it.

But it is, of course, not even close to legible. Is this really a chart of permits required to build a highway?

CNBC was able to get the highest quality image out there. Here is a direct link to the image.

Specifically, the entire paper is a flowchart of the process of getting permits. The large white box is the list of permits, but you might not need to get all of them.

There's a lot going on, and it's not particularly clear, since lines are everywhere. I'll explain one part of it, this part: 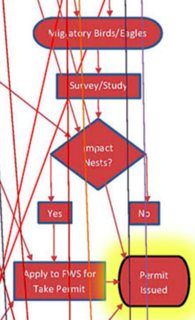 There are two permits here that are grouped together, The Bald and Golden Eagle Protection Act permit and the Migratory Bird Treaty Act permit (presumably because they are very similar permits).

While I can't find much information on the Migratory Birds permit, I found what can be playfully described as a choose-your-adventure guide for determining if you actually need an Eagle permit. It's on the US Fish and Wildlife (FWS) site here. One path ends with you needing to sign something, but not needing an Eagle permit.

FWS has a list of permits here, but not all the permits are in their list, and most of the permits that are listed don't have an "Estimated Processing Time".

147
Are there 96 million workers in the US who want a job and can't get one?
7
Was it harder for Syrian Christians to immigrate to the US than Muslims?
52
Was Donald Trump's approval rating at 50% in June 2017?
91
Was Morocco the first country to recognize USA?
53
Is Trump personally blocking people on Twitter?
1
Is it true that everyone that currently needs a ventilator can get a ventilator as of April 2020?