Do more men use the Internet than women? 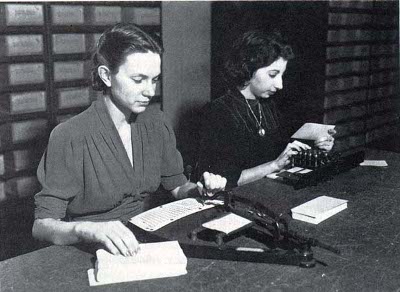 Long before the Internet existed, computers were women. (United States Census Bureau, courtesy of the University of Hartford)

It's a well-known trope that there are no girls on the Internet. In fact, apparently that is a "rule of the Internet".

At any rate, I know a few women who do, in fact, use the Internet, so that I can at least anecdotally refute that statement. Furthermore, it seems highly unlikely that 51% of the world population has been excluded from one of mankind's greatest achievements.

Yet, it stands to reason that such a widely espoused viewpoint might have some basis in reality.

Is there any evidence that more men than women use the Internet?

A report called
Doubling Digital Opportunities:
Enhancing the Inclusion of Women & Girls in the Information Society
was issued in September, 2013, by the United Nations' Broadband Commission Working Group,
a commission formed jointly by ITU and UNESCO.

TL;DR It claims that internet access was unequal at that time.

A news report about it at Network World: Massive Internet Gender Gap

The full report in PDF

From page 6 of the report:

More than twenty years after the birth of the Internet, two-thirds of the planet’s population still do not have regular access to the Internet, and a greater proportion of these unconnected global citizens are women. ITU (2013) estimates that some 200 million fewer women are online, compared with men. Women are coming online later and, as a gender, more slowly, than men.

From the Network World news article:

The gender gap in Internet services is particularly noticeable in major Arab countries, according to the report. Statistics from the Arab Advisors Group showed that higher percentages of men in Saudi Arabia, Morocco and Jordan use ecommerce services than women. In Egypt, Jordan, Kuwait, Lebanon, Morocco, Saudi Arabia, and the United Arab Emirates, no fewer than 62% of men use smartphones. Among those same countries, Morocco’s 38% of females using smartphones is the highest rate, according to the report.

The report is dated 2013. Have things changed since then? The report notes:

the ITU/UNESCO Broadband Commission for Digital Development endorsed a fifth broadband advocacy target, calling for gender equality in access to broadband by 2020.

TLDR - Not much solid data aside from UK where numbers are stated as almost equal.

I know Facebook is not the internet, but it has a huge slice of the traffic.

These statistics from early 2009 suggest there are more female users than males using* Facebook than males. Although the data is not entirely clear it is at least based on actual Facebook data according to the article.

On average, the ratio of male to female Facebook users is .85, meaning that there are significantly more Female facebook users than male ones. This plays out with general trends in social networking gender demographics, which tend to show a predominantly female base of users.

*Unfortunately this does not state clearly what they mean by usage

There are many sites out there that claim to represent a bias towards females and many sensationalist articles.

Most of these are based on "various sources".

One such example is this one from Cory Doctrow in 2007: 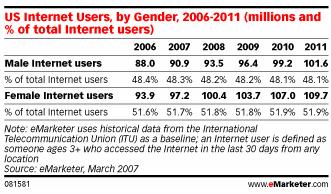 This has its source as eMarketer who according to themselves is based on "Data from over 4,000 Worldwide Sources". Which in itself is not a reasonable source for this site.

It seems this question came up around 2007 and there was some interest in it, but as most of it was tripe and unprovable people stopped paying attention.

One reliable source would be a national census. I am a non-American, so can't say for the USA and unfortunately for Australia the last available data is from 2000 which is now over 10 years old. A further search revealed little information from American census data that was recent.

Information about how this data is collected can be read in the linked document.

The percent of (adult) men and women who use the internet is about the same in America.

Here's a graph of that data:

In 2019, Pew conducted a survey of American adults that found that 10% of men and 9% of women did NOT use the internet: this means that 90% of men and 91% of women were using the internet, putting women slightly ahead of men in terms of internet adoption.

In 2021, Pew found that 6% of men and 7% of women report they don't use the internet, reaching this conclusion:

There are no statistically significant differences in non-internet use by gender, race and ethnicity, or community type.

There are, however, differences in where men and women go on the internet. On Stack Overflow, for example, skews heavily male. (The difference is much bigger than the gender gap in real life, too, at least for any numbers I can find on US women employed as programmers or similar.)

Not the answer you're looking for? Browse other questions tagged gender sociology internet .