Has Richard Spencer called for a "peaceful ethnic cleansing"?

There are many articles claiming that Richard Spencer called for a "peaceful ethnic cleansing".

However, CNN says that Spencer denies this:

He once called for a "peaceful ethnic cleansing," a claim he denied during the interview with CNN. But when asked how he would go about removing non-white from America, he had this to say:
"We have experienced this mass migration of people" into the United States, Spencer said. "Therefore they could go home, you can go home again. ... They came here peacefully. They could leave peacefully."

Calling for an ethnic cleansing would match Spencers political views, and the answer to CNN seems to confirm that this is a policy he supports. But I was unable to find the source for that specific quote. The closest I could find was this:

Today, in the public imagination, “ethnic-cleansing” has been associated with civil war and mass murder (understandably so). But this need not be the case. 1919 is a real example of successful ethnic redistribution—done by fiat, we should remember, but done peacefully.

However, most articles surround the phrase with quotes, so I am assuming that it is a direct quote.

Has Richard Spencer called for a "peaceful ethnic cleansing" in those words?

In a (NSFW)speech that he delivered at the 2013 American Renaissance conference, he said:

Today, in the public imagination, “ethnic-cleansing” has been associated with civil war and mass murder (understandably so). But this need not be the case. 1919 is a real example of successful ethnic redistribution—done by fiat, we should remember, but done peacefully.

He has also admitted in a tweet that he talked about "peaceful ethnic cleansing", linking to the same speech. A screen grab of the tweet: 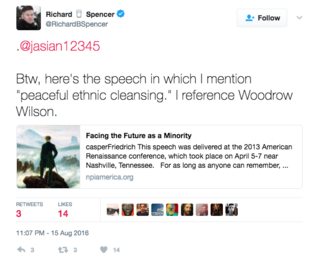 Most sources online that cite Spencer as supporting peaceful ethnic cleansing source it to the Southern Poverty Law Center which cites the same speech:

In an address at white supremacist Jared Taylor’s 2013 American Renaissance conference, Spencer called for “peaceful ethnic cleansing.” As an example of how this could be accomplished, he cited the 1919 Paris Peace Conference, where new national boundaries were formed at the end of World War I. “Today, in the public imagination, ‘ethnic cleansing’ has been associated with civil war and mass murder (understandably so),” Spencer said. “But this need not be the case. 1919 is a real example of successful ethnic redistribution—done by fiat, we should remember, but done peacefully.”

Not the answer you're looking for? Browse other questions tagged united-states politics quotes .

10
Did Nietzsche ever state “The world is beautiful, but has a disease called man”?
17
Did Richard Nixon commission a study on the effects of THC and then have the results classified?
27
Are these real badges for Richard Nixon's 1972 Presidential campaign?
17
Did Donald Trump ever say illegal immigrants should have a path to citizenship?
17
Is "If you have nothing to hide, you have nothing to fear" a line used by Joseph Goebbels?
17
Has Trump exonerated Russia for the downing of flight MH-17?
7
Was there ever a cable channel called The Puppy Channel which broadcast for three years?
8
Has the Americans with Disabilities Act reduced employment for disabled workers?
69
Were World War II scrap drives in the United States truly necessary for the procurement of raw materials?
31
Has Boris Johnson ever referred to any of his opponents as "traitors"?