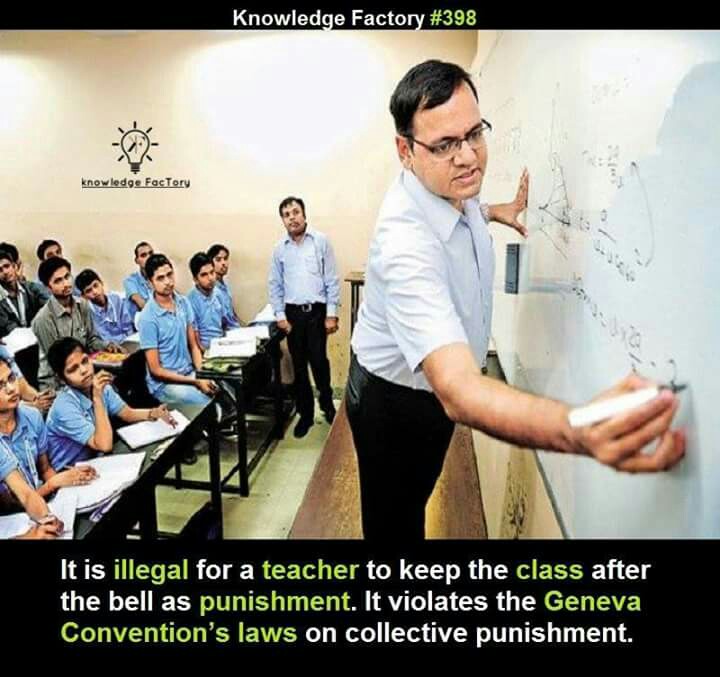 Saw this on Facebook today. In what context is this applicable (if at all it is)?

And what does it have to do with collective punishment? Are they referring to keeping the whole class back or keeping a few students back?

Most likely a humorous context, because it is not applicable.

The Geneva conventions are a set of international law conventions concerning war-time situations. They have 4 main conventions:

The Collective punishment provision is in the Art. 33 in the 4th Convention, however although being about civilians, it still only covers war situations as its full title is (emphasis mine):

No protected person may be punished for an offence he or she has not personally committed.

Collective penalties and likewise all measures of intimidation or of terrorism are prohibited.

Reprisals against protected persons and their property are prohibited.

This article is derived from Article 50 of the Hague Regulation:

Regulations respecting the laws and customs of war on land - Section III : Military authority over the territory of the hostile state - Regulations: Art. 50.

No general penalty, pecuniary or otherwise, shall be inflicted upon the population on account of the acts of individuals for which they cannot be regarded as jointly and severally responsible.

This paragraph then lays a prohibition on collective penalties. This does not refer to punishments inflicted under penal law, i.e. sentences pronounced by a court after due process of law, but penalties of any kind inflicted on persons or entire groups of persons, in defiance of the most elementary principles of humanity, for acts that these persons have not committed.

Not the answer you're looking for? Browse other questions tagged law education school .

7
Do mechanical pencils cause problems on standardized tests?
9
Will parents be arrested in Magnolia, Texas for walking with their children onto school grounds?
5
Are Australia's 5G radiation safety standards at least one hundred times laxer than of 6 other listed countries?