Does talking to a rubber duck improve programmer performance when debugging?

In software engineering (especially XP) there is a commonly held belief that talking to a rubber duck will improve performance when debugging problematic code.

This technique is referenced in multiple places from well-respected blogs such as Coding Horror (in a post about improving the quality of questions asked on this network, no less!) as well as multiple questions and answers on both the Workplace and Software Engineering stackexchange networks.

I also found a reference in a well-respected book 'The Pragmatic Programmer' (although the book seems to advocate using a nodding human rather than a rubber duck - presumably reflecting the relative absence of ducks in a standard office setting) :

A very simple but particularly useful technique for finding the cause of a problem is simply to explain it to someone else. The other person should look over your shoulder at the screen, and nod his or her head constantly (like a rubber duck bobbing up and down in a bathtub). They do not need to say a word; the simple act of explaining, step by step, what the code is supposed to do often causes the problem to leap off the screen and announce itself.

Why "rubber ducking"? While an undergraduate at Imperial College in London, Dave did a lot of work with a research assistant named Greg Pugh, one of the best developers Dave has known. For several months Greg carried around a small yellow rubber duck, which he'd place on his terminal while coding. It was a while before Dave had the courage to ask....

Multiple sources suggest plausible mechanism of action for the effect of explining code to a duck. Here is 'The Pragmatic Programmer' again:

It sounds simple, but in explaining the problem to another person you must explicitly state things that you may take for granted when going through the code yourself. By having to verbalize some of these assumptions, you may suddenly gain new insight into the problem.

and I also found a blog post about the underlying psychology of the technique.

I have been unable to find any academic or industry body studies proving the efficacy of talking to a rubber duck.

I don't think it is unreasonable to expect studies on this to have been carried out because similar, highly referenced, studies(pdf link) exist which show that pairing between real (i.e., non-rubber) humans does improve programmer performance .

In summary this seems to be a widely held belief advocated by several strong voices in the community, and while there is a rational sounding basis for the mechanism of action and there seems to be a lot of anecdotal evidence, there doesn't seem to be any empirical studies proving this effect real.

In case anyone I did not have a rubber duck available but I did consult a plush parrot, which can be seen photographed below (left), before posting this question but they were regrettably unfamiliar with the literature on this topic. 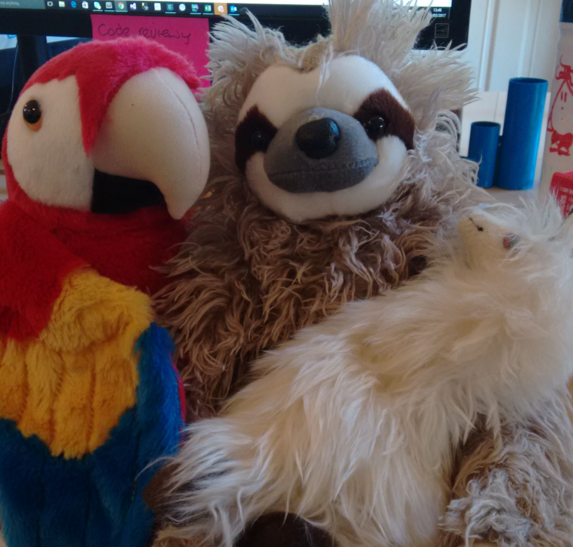 You're not going to find studies that do something like compare the effectiveness of a rubber duck vs a stuffed parrot specifically for programmers working on debugging tasks, nor can we really measure the size of the effect, but your main question can be answered if we approach it at a slightly higher level: does talking through a problem aloud aid in problem solving?

To which the answer is clearly yes.

Enhance Metacognition and Problem-Solving by Talking Out Loud to Yourself

In recent research on TAPPS, reported in the University of Arkansas publication Research Foundations, Spring 2011, the author noted that the increased speed and effectiveness of partner problem-solving has little to do with the monitor and much to do with the problem solver’s own behavior; thinking aloud or TA. The constant verbalization of their thoughts out loud encouraged the problem solvers to continuously correct faulty steps in logic. The causal mechanism of success was the problem-solver’s metacognition.

TAPPS is "Talking Aloud Partner Problem-Solving", where one of the partners is the "active" partner, thinking aloud through a problem, the other is simply a "monitor" or "listener", playing a role only slightly more interactive than our programmer's rubber duck.

There is lots of scholarly research out there about TAPPS.

Professor Jose Luis Villegas Castellanos, of the University of the Andes, Venezuela, said that discussing problems was a smart way to learn.

"Those students who think aloud while solving a mathematical problem can solve it faster and have more possibilities of finding the right solution that those who do not do it," he said.

The study, led of the University of Granada, Spain, focussed on final year university maths students, who were recorded while trying to answer complex maths problems.

Those who detailed their thinking process aloud had more chance of answering the same question correctly as those who did not talk about their problem solving plan, the researchers found.

Not the answer you're looking for? Browse other questions tagged software productivity programming engineering .

135
Is the Ballmer Peak real?
9
Do pendulums have any explanatory power?

20
Does listening to music while working improve mental ability?
29
Does pair programming improve the correctness of software?